The Sequestered Life of Julia

A meticulous new analysis examines the benefits of government-administered socialism among a representative cross section of individuals.  It is an insightful departure from the usual studies of socialism that analyze only collective benefits to society using statistics about such things as income quartiles and poverty levels.  The new study is 27 pages and can be accessed as a PDF file via this link.  As its author, I'll summarize the results here.

Julia, the president's comic book heroine, is used as the baseline.  Because Julia is a fictional character invented by the president's reelection team, she is, by definition, his idea of the perfect socialist Überfrau -- a role model for all Americans to emulate. 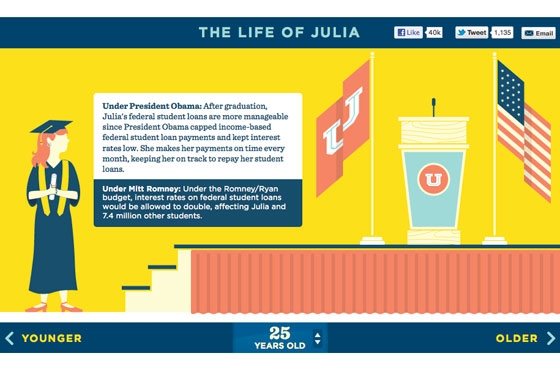 However, Julia has beneficial traits that the average person does not have.  For instance, she is creative, as demonstrated by her lifelong success as a web designer.  She also is ambitious and perseverant enough to start her own design firm instead of spending her entire career as a salaried or hourly employee.  And she never needs the president's vaunted "social safety net" for unemployment, food stamps, or other welfare programs.

A financial spreadsheet was constructed to model Julia's entire adult life, from ages 19-85.  As would be expected, fictional Julia lives the comfortable existence that the president promised in his comic book.  Unfortunately though, her federal, state, and local governments continue to pile up more debt and pension and healthcare liabilities in order to support her comfy lifestyle.  In other words, upper middle class Julia not only contributes nothing to the president's social safety net; she actually consumes all of the money -- and more -- that she supposedly provides to fund it.

The Life of Freda

Puzzled by that disappointing outcome, I then constructed a spreadsheet of a non-socialist version of Julia to find out how much worse things would be with absolutely no entitlement programs or government-funded education.  With all the doom and gloom predictions leading up to the federal budget "sequester" cuts of just a percent or two, my far-deeper cuts certainly should create a dystopian hell on earth.

The financial outcome for "Freda", Julia's freedom-loving peer, was stunning.  Freda pays her own way for virtually everything, gets better service, contributes nothing to the national debt, and becomes a multimillionaire.  Not only is Freda better off, she also "gives back" more to society, compared to Julia.

The Life of Ileana

Ah, but Julia and Freda both have traits that gave them a running start on success.  Suppose "Ileana" arrives as an illegal alien, skips college, and earns exactly half as much as Freda.  And like Freda, she hypothetically is allowed to opt out of all entitlement programs.  According to the president and his supporters, Ileana certainly would freeze and starve without socialism.

As Ileana's financial spreadsheet shows, the leftist spin again is proven wrong.  Not only does Ileana survive, she actually becomes wealthier than Julia, while demanding nothing from the rest of society in the form of entitlement payments or taxpayer-funded education.

And as a healthy side benefit, with no taxpayer-funded socialism, America's immigration problem would be solved automatically: Everyone is welcome, but you must support yourself.  Until less than a century ago, it was the proposition all immigrants accepted.  That self-administered filter helped make America the land of unlimited opportunity and upward mobility.  By abolishing all entitlements again, only the productive will come to America and the societal parasites will go elsewhere.

The Life of Ankara

Because the results of the study are so utterly devastating to socialism, I assumed that the power-crazed politicians would be motivated from Brussels to San Francisco to criticize my findings.  In anticipation of that, I envisioned a fourth woman, "Ankara", to be the anchor baby of an immigrant living illegally in the US.

I modeled Ankara to be an everyday clock-puncher that is not particularly creative, ambitious, or perseverant.  She does not go to college, starts her career at minimum wage, and does not leave her employer to form her own firm.  Her salary stagnates when she reaches her early forties.  She's a female "Joe Six-Pack" stuck in a dead-end job.  And like Freda and Ileana, she lives in a nation that allows her to opt out of all taxpayer funding for and benefits from entitlement and education.

Uh-oh.  Even Ankara is better off without socialism than Julia is with it.  Ankara was born into poverty, pays her own way for virtually everything, gets better service, contributes nothing to the national debt, and retires in the middle class.  Her private-school educated son has a future much brighter than that of Julia's son.  Ankara's son is likely to spend his adult life comfortably in the middle class and her grandson probably will do even better.  That's real social justice.

Here is one of the diagrams from the new study.  It summarizes the characteristics and likely lifetime outcomes for the four women. 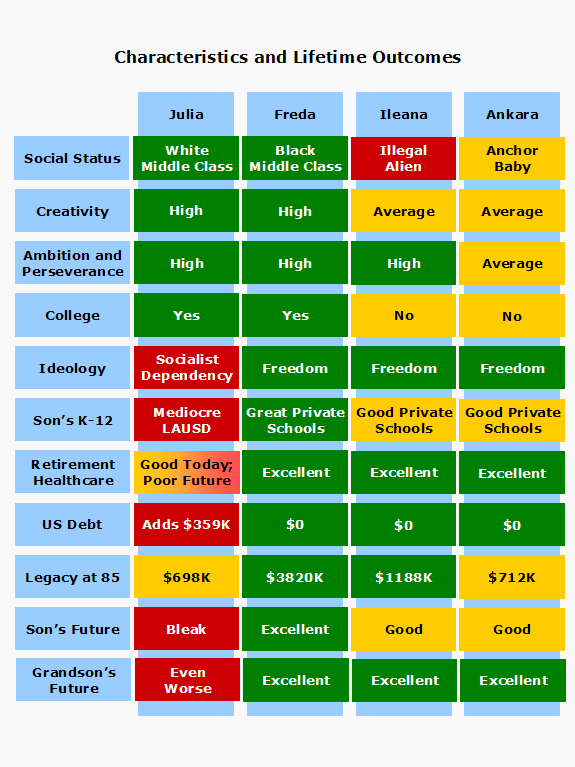 What about those that are unable to work?  Some need a social "safety net"

Yes, they do.  But socialist Julia certainly doesn't provide it.  She consumes more government services than she pays for, so she "sequesters" the social safety net.

In contrast, "cold hearted" Freda, Ileana, and Ankara all balance their governments' budgets, so they pilfer nothing from society's safety net.  And compared to "kind hearted" Julia, the other three women have more personal wealth to donate to private schools, food banks, hospitals, and elder care facilities.  Research shows that non-socialists are more generous too, so Freda, Ileana, and Ankara are likely to donate a larger portion of their wealth to charitable organizations.

As flight attendants say, "If you are traveling with a child or someone who requires assistance, secure your mask first, and then assist the other person."  Julia can't help those around her because she already is light headed and turning blue.