Pennsylvania House Representative Ronald G. Waters (Philadelphia) is a prime example of a big-city politician.  He recently introduced a package of gun laws that are unlikely to get through the Pennsylvania House, let alone the Senate or governor, but House Bill 521 is worthy of close inspection -- just like a culture dish of infectious bacteria.  Waters has, in fact, repackaged the 19th century's Jim Crow for resale to credulous voters in the 21st century. 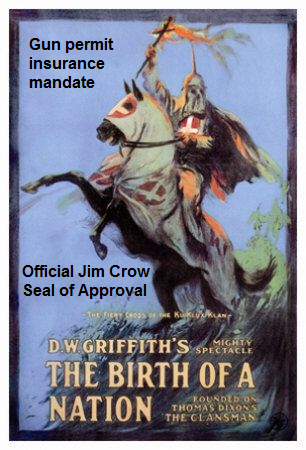 Here is the relevant text of House Bill 521:

(1) No individual shall be issued a license under subsection (e) without providing the licensing authority with certificate of liability insurance verifying that the applicant has a valid insurance policy insuring against harm or damage that may arise out of the use of a firearm covered by the license.

(2) The insurance policy shall meet all of the following:

(ii) Satisfy any judgment for personal injuries or property damages arising out of negligent or willful acts involving the use of an insured firearm.

(iii) May not cover any unlawful acts.

Careful examination of these provisions reveals the following glaring deficiencies:

(1) Very few people who cause trouble with guns qualify for concealed carry permits, and they would therefore not purchase insurance.  Minors (such as teenage gang members) and convicted felons cannot legally own any firearms whatsoever, let alone carry them.

(2) The legislation admits openly that liability insurance does not cover damage from an unlawful act, and most insurance policies carry a "criminal acts exclusion."  Automobile insurance policies are a partial exception because they must, as a matter of public policy, reimburse innocent victims of criminally negligent acts such as drunk driving.  Even these policies, however, provide no coverage for intentionally criminal conduct.  Any "willful act" with a firearm that causes death or injury will almost certainly be an intentionally criminal act such as murder, aggravated assault, or armed robbery, and therefore not insurable.

(3) Existing homeowner's insurance (or, by implication, renter's insurance) may already cover liability for the negligent discharge of a firearm -- an event that is essentially impossible if one follows all the rules of gun safety.  The Ohio State Bar Association reinforces the fact that "Most intentional acts aimed at harming someone will not be covered by this type of insurance policy."

The cost of this essentially useless insurance mandate is therefore a $200 to $300 annual tax on the basic right of self-defense.  This would be a mere inconvenience to the upper socioeconomic classes, while criminals who own and carry guns illegally would simply not bother to buy insurance that would not cover damage from their crimes anyway.  Whom, then, would the mandate affect the most?

Consider a working-class person, like a nurse's aide or janitor, who works 40 or more hours a week at a low-wage job.  He or she may even get public assistance because the job does not pay enough on which to live, but this does not change the person's status as a law-abiding citizen.  It is a reality of American demographics that this person is likely to be African-American, although there are plenty of Caucasians, Hispanics, and others who also fall into this category.

Now suppose that the person has to walk through a bad neighborhood (his, that of his workplace, or both) after dark, as might easily be the case for a second- or third-shift job.  He or she has a very legitimate need for a concealed carry permit, but House Bill 521 may make it impossible for him to afford it.

This makes House Bill 521 a repackaged version of a racist 19th-century law whose purpose was to limit the basic right of self-defense to the "right kinds" of white people, including those of the sheet and hood persuasion.

In 1879, the General Assembly of Tennessee banned the sale of any pistols other than "army or navy" model revolvers. This law effectively limited handgun ownership to whites, many of whom already possessed these Civil War service revolvers, or to those who could afford to purchase these more expensive firearms. These military firearms were among the best made and most expensive on the market, and were beyond the means of most blacks and laboring white people.

Pennsylvania Democrats complained recently, and with some justification, that the state's Voter ID law had the same effect on voting rights by imposing costs on lower socioeconomic classes.  Even though the identification card was free, some people had to pay to get birth certificates or other proofs of citizenship.  House Bill 521, then, applies the poll tax concept to the right of self-defense.

It is particularly troubling that several of this bill's co-sponsors are African-Americans.  Vanessa Lowry Brown even has a "Black History Month" ad on her website, but it is apparent that she has not studied much black history.  I would recommend that she educate herself with this publication from the Jews for the Preservation of Firearms Ownership: "Gun Control is Racist." Here is some more black history for Ms. Brown, including the role of gun control in the infamous Dred Scott decision.  "Gun Control: White Man's Law" is instructive, as is "No Guns for Negroes."  An anti-KKK law, meanwhile, had the following provisions:

That whoever shall, without due process of law, by violence, intimidation, or threats, take away or deprive any citizen of the United States of any arms or weapons he may have in his house or possession for the defense of his person, family, or property, shall be deemed guilty of a larceny thereof, and be punished as provided in this act for a felony.

Quimbo and Sambo, Simon Legree's brutal overseers in Uncle Tom's Cabin, at least had the excuse that they also were slaves who had to obey their master's orders to keep other black people in their place.  Waters and his African-American cohorts have no such excuse.  The same can be said of Jewish legislators like Dianne Feinstein, Carl Levin, Charles Schumer, Jerrold Nadler, and Michael Bloomberg who support the same kinds of gun laws that the Nazis used to disarm Jews and other so-called undesirables.

We have, in fact, heard a variant of Nadler's "[o]ne of the definitions of a nation state is that the state has a monopoly on legitimate violence. And the state ought to have a monopoly on legitimate violence."  The source was Reichsführer Heinrich Himmler: "Germans who wish to use firearms should join the SS or the SA; ordinary citizens don't need guns, as their having guns doesn't serve the State." 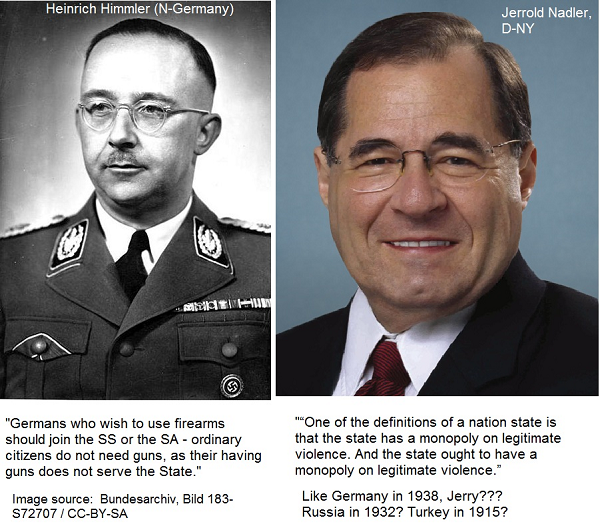 When African-American legislators channel Jim Crow and the Klan, and Jewish legislators like Nadler channel Heinrich Himmler, there is a serious problem that the people who put them into office need to correct.