It was a picture dredged up to prove the assertion the President had made in January to the breezy effect that the President is indeed acquainted with firearms, since, as he stated (roughly paraphrased), We've often shot skeet when we're at Camp David.

It took a few days, where conservative media baited the press secretary Jay Carney, for proof, any proof, and where the Democrats either pooh-poohed the need for proof, since the President rarely turns out to have accuracy as his first arrow out of the quiver, or they prayed-uncharacteristically -- that there were, somewhere, please Heaven, something to show that this was not another You didn't build that. 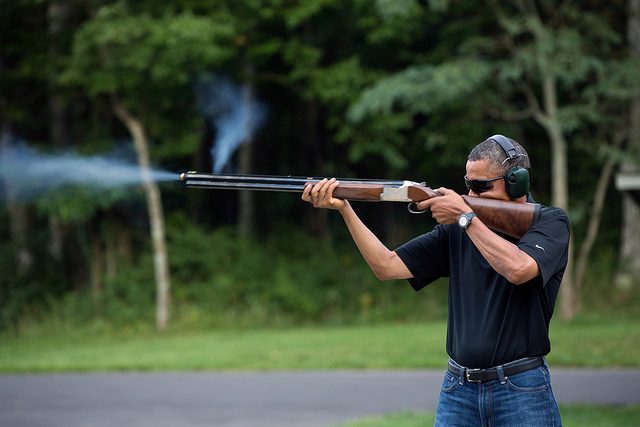 Herewith, a top ten listing of what makes one suspect the photo was bogus, cooked up with Photoshop or entirely composited, like the President's one "composite girlfriend" in his account of his 'dating life' before he became noteworthy and flew right into the radar. (And strange it is that there aren't women pouring out of the woodwork with pictures of their keeping company with the pre-President of his Columbia or Occidental days):

1. The President has no shoulder guard for recoil. No shoulder pad: He probably expected to "shoot" one single shot. And that was that. No need for a cumbersome padding for his shoulder. Not exactly a crackerjack constant practitioner, despite his avowal.

2. He is wearing sunglasses. Dark, tinted, sleek, stylized. Not what you wear to shoot skeet or any firearms practice. The correct protective gear is clear plastic goggles, usually rubbery and strapped around the head. Not Foster Grants.

3. The awkwardness of the President's stance leads one to believe he was insufficiently tutored. Or he had no idea what he was doing. And there were no handy-dandy experts around to correct his body language. Stance is all in shooting, as is grip. BTW: The President is left-handed-does that square with his preferred shooting side?

4. His shotgun is aimed straight ahead, where all skeet shooters we know of, including ourselves, follow the arc of the clay once the shooter yells "Pull!" Shooting straight is simply not doable, unless he is shooting at the person releasing the clay from its boot housing. The shotgun thus ought to be pointing up, to right or to left, at a strong angle to the ground.

5. His hair is much greyer now than it was last year--the percentage of grey in the shot indicates he went back in time to get the picture, but forgot to match his hair black-to-grey ratio to match last year's follicular manifestation.

6. One picture? Why not scads? A photog almost always accompanies the President wherever he goes, save to the loo, perhaps. Do we understand that in the age of video and YouTube, cell phones with great cameras, tablets and throw-aways, there was but a single, lonely picture taken of this sport that the President claims to do "all the time"? Why no video? Why no pic-pac (my neologism), a strip of 4 sequential shots like we used to buy for $.50 from a machine with a tiny swivel-stool seat and a half-curtain of mustard-stained poly?

7. Why was this so deep a secret until the President spilled the beans, declaring himself this virtuoso skeet aficionado? Not a whisper of this avocation escaped his lips or the lips of his confidants before his gambit to comfort second amendment fans and voters.

8. Can we ascertain with certitude that the photo background matches that to be found in Camp David? The CIA and FBI are aces at sussing out from a random area shot where something transpired. We did it for years around every photo of UBL, in a mountain redoubt, on a rock-strewn hillock, in a rural Afghani meadow, etc. Have we subjected this photograph to the same rigorous testing we employ with, say, Hezb'allah "war shots" accusing Israel, say, of atrocities and poison gas, cluster bombs, lethal resins and deliberate bombing of civilians? In that case, there is an entirely lovely coining, Faux-tography, developed to represent the  array of deceit practiced by stringers in the pay of terror groups but not averse to pinning false charges on the Israelis by a mere flick of the computer COPY and PASTE technical wizardry.

9. Is the man in the photo even Barack Hussein Obama? Or is it a body double? The President famously conferred with Kathryn Bigelow of ZERO DARK THIRTY fame, giving her all manner of privileged and classified information in order to macho up the truth factor of her boffo capture-and-kill lenser on the triangulation leading to UBL's ballyhoo'ed capture and FedEx dispatch to the 72 virgins over in the stucco'ed, heavily reinforced Bin Ladin fortress in downtown Abbottabad, a mere mile or so from Afghanistan's West Point.

10. Good to note the President wore ear protection, which was an easy grab for the set designer to haul in. Does he have that ear-protective design still in his possession, or was it borrowed? Can we test for DNA?