On, February 17th, a very chilly and windy Sunday afternoon, the big guns of global warming activism gathered with their true believer followers in a park adjacent to the Washington Monument.  Several speakers estimated the crowd at 35,000 to 40,000, as did the Nation magazine.  The Huffington Post mentioned 40,000.  I made my own estimate.  On the march to the White House the line stretched along Constitution Avenue from 15th street to 17th street, a distance of 1500 feet.  I generously estimated 50 people every 20 feet.  This totals to less than 4000 people.  The organizers of political demonstrations always exaggerate the size of the crowd, but a factor of 10 is extreme inflation. 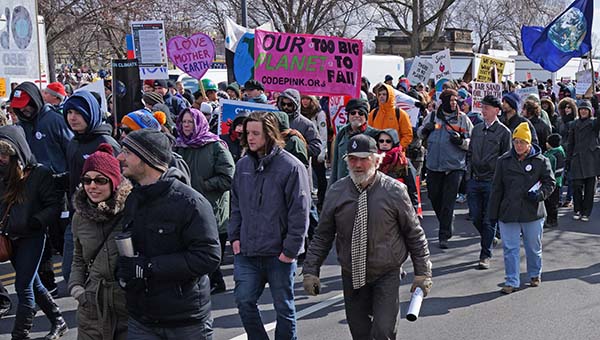 The majority of the attendees appeared to be college students with a sprinkling of older lefties.  When Michael Brune of the Sierra Club mentioned George W. Bush's name there were loud boos. 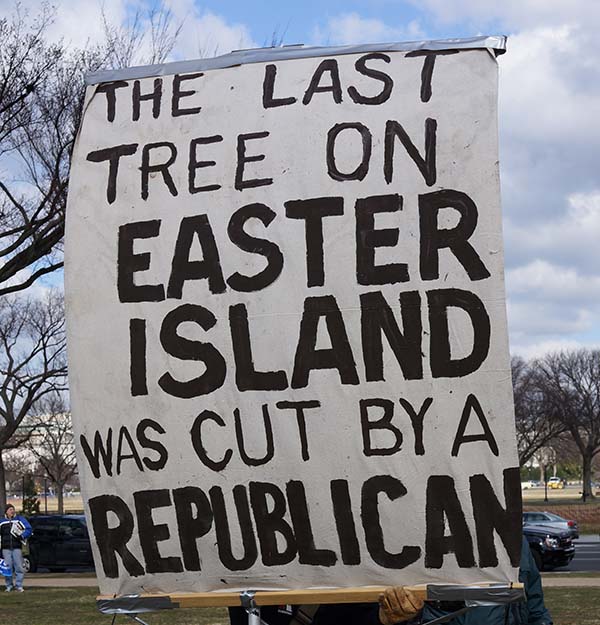 For some reason, one fellow with a press pass and a camera was wearing a hat adorned with a hammer and sickle. 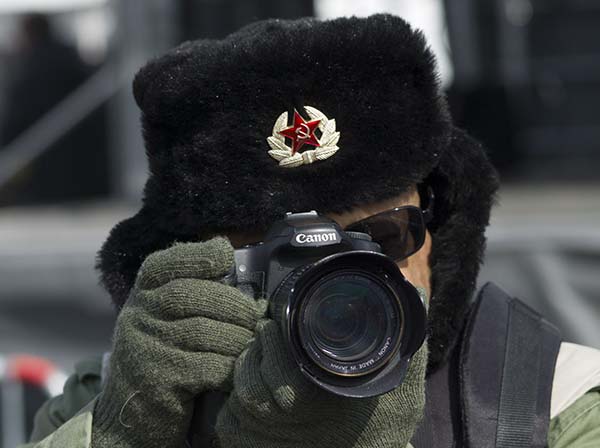 Bill McKibben is the head of the well-financed organization 350.org as well as a scholar in residence at Middlebury College in Vermont.  His organization espouses the theory that CO2 in the atmosphere must be reduced to 350 parts per million.  McKibben is living proof that it is possible to be eloquent, fanatical and ignorant all at the same time.  Here are some of the things he said at the rally: 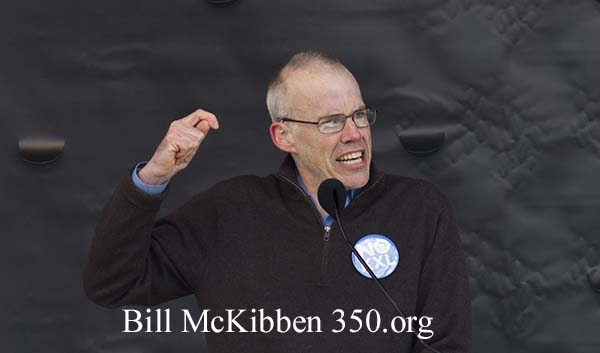 "...you are the antibodies kicking in as the planet tries to fight its fever...we've already seen the arctic melt...above all stop the keystone pipeline...the president can do that with a single stroke of his pen...that would be a legacy and a signal to the rest of the world...set aside a few dollars each week for a bail fund...the job that we have undertaken is the most important one that any humans have ever been entrusted with...it is our job to make sure that the planet does not catastrophically overheat...the oil companies are not going to do that, their business plan is to wreck the Earth...the government isn't going to do that, they're too busy taking money from oil companies...history shows that although we're never going to outspend the fossil fuel industry, we can find other currencies to work with...spirit, creativity...the powerful, powerful love for the future that bought you here today...we can see in our minds' eye all the generations to come...we can see the beauty of the world we've been given...the cold of a winter day, the color on an autumn hillside..."

The global warming movement has staked a lot on the Obama administration blocking the Keystone XL pipeline that will bring oil from the rich Canadian oil sands south to the petrochemical complexes of Texas.  The problem for Obama is that if the pipeline is blocked, the Canadians will surely build a pipeline to either their East or West coast in order to sell the oil into the world market.  So, oil that would have been sold directly into U.S.  markets at a good (for us) price will, instead, be cycled through world markets and we will end up paying more for oil that is no longer exclusively ours.  If the Persian Gulf should be blocked by war, we will miss that oil very badly.  Obama's choice is to pacify the crackpot left at great risk to the nation, or to approve the pipeline and make his leftist supporters very angry.  Happily, Obama loses either way.  My guess is that he will approve the pipeline on the theory that his leftist support has no place else to go.  He could, as a stalling tactic, commission a study to try to postpone the decision until after the midterm elections.  Al Gore may be waiting in the wings to pick up the pieces. 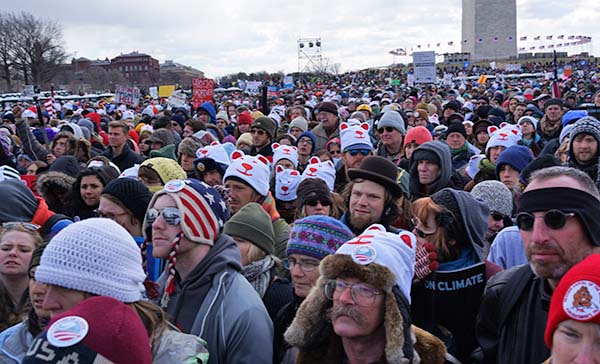 Leftist events always have to include Indians and movie stars.  In this case the Indians were from Canada where they come from the First Nations rather than tribes.  There seemed to be three different nations represented, although it was hard to be clear on that point.  All the Canadian Indians spoke with perfect Canadian accents and it appeared that every one of them was female; although there was one fairly tall person with the androgynous name Casey and pigtails whose gender was not obvious.  The lack of male Indians may have to do with the First Nations alcoholism problem.

The necessary movie stars were 14-year-old Nolan Gould from the TV show Modern Family and the well-known actress Rosario Dawson. 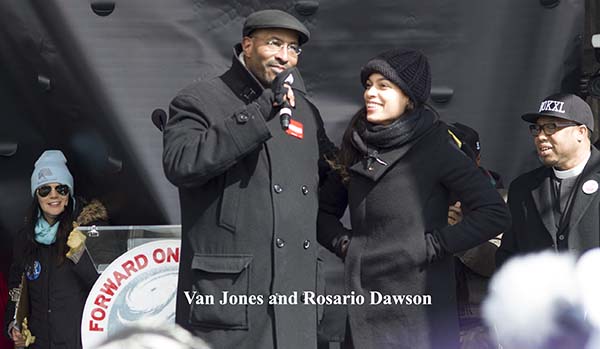 Van Jones, formerly at the Obama White House appeared.  He was forced to resign after previous statements indicating strong communist opinions surfaced and he called Republican senators "assholes." Of course this gave his career a big boost after leaving the White House.

The left-leaning senator from Rhode Island, Sheldon Whitehouse, was the only politician to speak.  Naturally, he spoke the global warming party line. 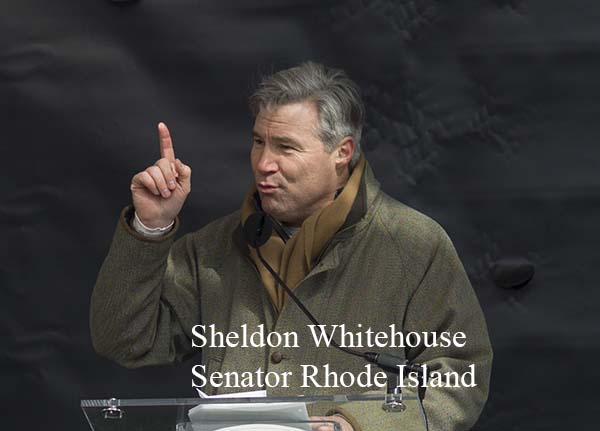 The final speaker was Michael Brune, the executive director of the Sierra Club. 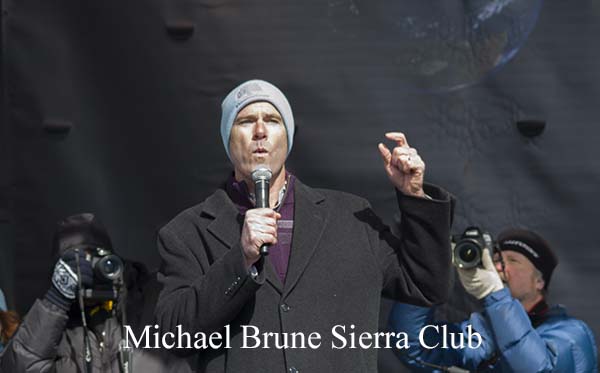 Brune bragged about killing hundreds of coal generating plants via political action.  New York billionaire mayor Bloomberg contributed $50 million to help that activity along.  Like Marx, Brune said that history is on his side and that if Obama rejects the Keystone XL pipeline Obama will be on the winning side of history.  Only in the world of the left does history take sides.  Like many speakers, Brune blamed forest fires, droughts and the hurricane Sandy on global warming, a position without sound scientific support.

Norman Rogers is a retired physicist and computer expert.  He is a senior policy advisor for the Heartland Institute, a Midwestern think tank.  Annoyingly the fossil fuel industry has not sent him any money.  He maintains a personal website.