U.N. Resolution 260 (III) -- Convention on the Prevention and Punishment of the Crime of Genocide -- was signed on December 9, 1948.  It memorializes a worldwide consensus against state-sanctioned killing of people by groups.  The convention protects "national, ethnical, racial or religious group[s]."  The Convention forgot to protect a group called the expensives.

Nation-states are killing people based on their costliness, rather than their place of origin, skin color, religious commitment, political affiliation, or ethnicity.  In order to cut healthcare costs, Great Britain and soon the U.S. will eliminate (kill) patients whose only crime is being expensive to treat.

Supporters of the ACA such as President Obama and Dr. Don Berwick openly and proudly said that ObamaCare was modeled after the British National Health Service (NHS).  It is reasonable to expect that what the NHS has done in England will be done here.  Additional acronyms that must be added to our body of evidence include NICE, IPAB, LCP, and WaSEPTS.  Each will be explained.

Virtually all conversations about healthcare devolve quickly to cost-cutting, as though saving money were the purpose of healthcare.  It isn't.  Healthcare's true function is to have healthy, long-lived people.  If cutting costs does not achieve that goal, healthcare is producing the opposite result from what we want.

You and I may talk about the "cost" of a car or a hernia repair, but only the manufacturer of a product or the provider of a service can cut true "costs."  Consumers and payers can only reduce their spending.

Consumers reduce spending through the free market, which balances supply and demand through competition and price variability.  Third-party payers -- private insurance and government agencies -- achieve balance by decree rather than by using market forces.  To reduce its healthcare spending, the government cuts payments for health care services.  For expensive patients, it may choose to cut payments to zero.  This translates to "no payment = no treatment."

Sarah Palin's "death panel" accusation on Facebook in 2009 turns out to have been true.  The name of this death panel is IPAB (Independent Payment Advisory Board), an agency created by ObamaCare.

IPAB members are appointed.  Its meetings are not open to public scrutiny.  There is no oversight.  IPAB is tasked with deciding which medical treatments are deemed "cost-effective" and which are not.  IPAB then recommends to Congress that the former be authorized for payment and the latter not.

Effectively, IPAB is practicing medicine by making healthcare payment law.  Doctors may advise the patient what is the best care, but the treatment that the patient actually gets or does not get is decided by IPAB.

IPAB was modeled on the British NICE (National Institute for Clinical Excellence).  To project what IPAB will do to us, look at what NICE has already done to the British populace.

Kidney dialysis after 55 years of age and heart surgery after 65 have been classified "not cost effective" by the NHS.  Result?  If a British citizen is over those thresholds, he or she is...allowed to die (passively) by government mandate.

Though treatments are technically available and medically effective on individuals, they are withheld because of national budgetary considerations.  This conundrum was brought before the British Court system.

The British High Court admitted that patients, providers, and the government were "impaled on the horns of a [moral and economic] dilemma."  It goes on to say that, given very real limitations in health care resources, the State has the right to do what it is doing: allowing people to die who could be saved.

As NICE has done to Britons, so IPAB will do to Americans: life or death by government decree.  The title of this article is "Cutting Healthcare Costs by Killing Patients."  Killing is an active, not passive, act.  While IPAB will allow you to die passively, WaSEPTS will actively kill you.

A sign at the entrance to Auschwitz-Birkenau read, Arbeit Macht Frei, meaning "Work Shall Make You Free."  Posing as a work camp, people marked for death were taken to the showers, supposedly for cleansing.  In fact, the "showers" were gas chambers.

Torn down in Poland, these showers were recently rebuilt in Liverpool, England and named the LCP (Liverpool Care Pathway).  A sign at the entrance might read, "Cutting Health Care Costs." 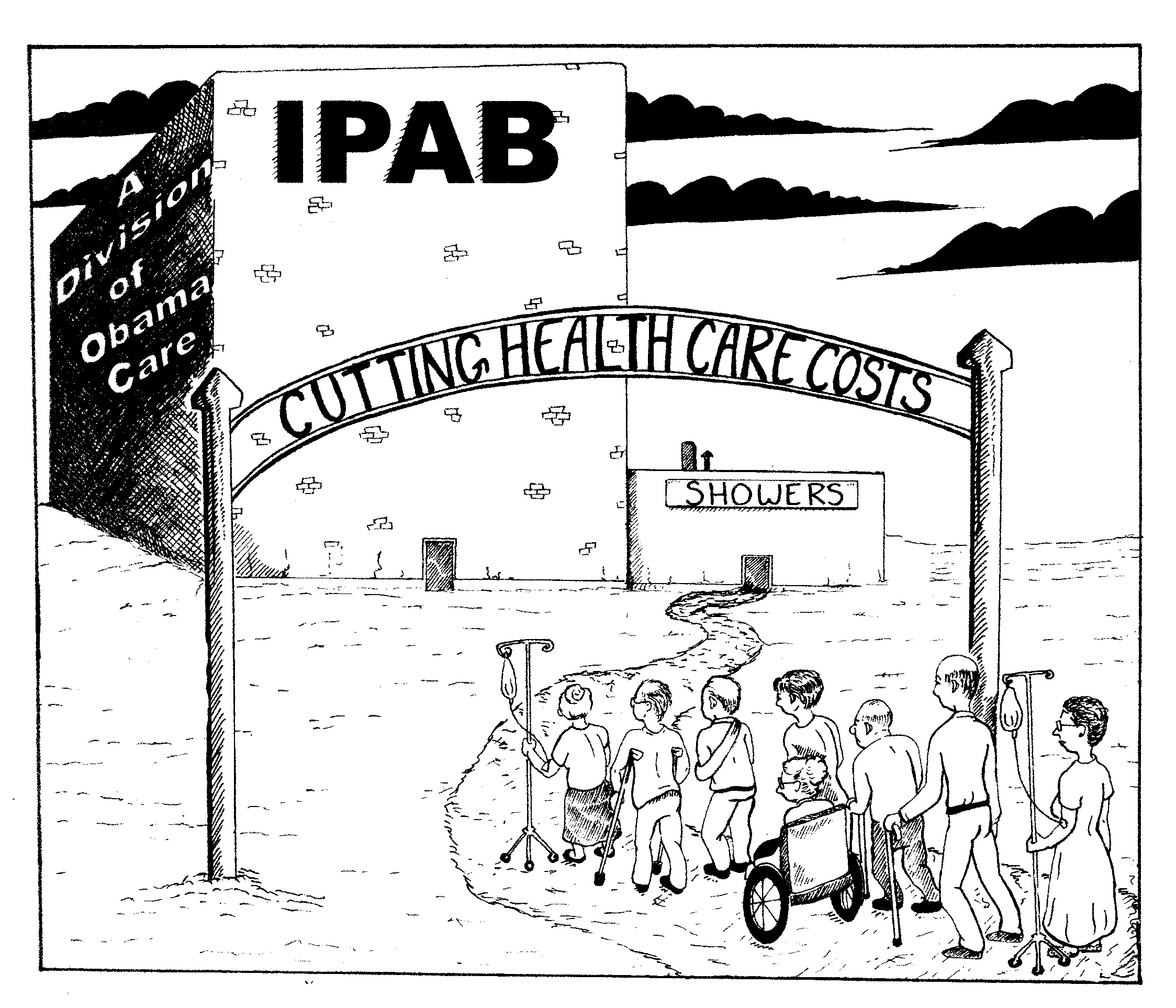 The LCP sedates patients to the point of coma and then withholds nutrients, even including IV fluids.  The LCP does not ease dying.  It hastens death.  To physicians, this is unconscionable, not to mention immoral and against the Hippocratic Oath we all swore: "I will ... never do harm to anyone. I will not give a lethal drug to anyone."

Everyone responds to incentives.  If you give a bonus for scoring points, professional sportsmen and women will score more points.  The NHS gives financial bonuses to doctors and hospitals for enrolling patients on the LCP, thus marking them for death.  Guess what happens.

There are reports of British citizens being enrolled in the LCP against their will.  These people are not asking for help while dying.  These are British citizens whom the British National Health Service is literally killing.  LCP is State-sanctioned -- in fact, State-rewarded -- murder of the "expensives."

What We The Patients want

Cutting costs seems to be what everyone wants, right?  For the Nazis, the "undesirables" they put to death were Jews, Gypsies, other ethnic inferiors, and political opponents.  Today's undesirables are expensive patients.  As the LCP program has not been formally introduced here yet, it has no name.  In honor of the history of this concept, I suggest the name "WaSEPTS" -- Washington Sends Expensive Patients To Showers.

In fact, cutting costs is not what we want.  In preparation for a new book on healthcare titled, Not Right, we asked We The Patients what they (you) want from healthcare.

On two questions, there was consensus, among both liberals and conservatives.  When asked, "Who is responsible for my health?," 100% of respondents answered, "I am."  When asked, "Who should decide your health care?," without exception, everyone said, "I want to control my own health care."

How will you feel when the government says that it is responsible and you are not?  What will be your response when Washington admits that it -- not you, and not your doctor -- makes your health care decisions?

Cutting health care costs by killing patients is both immoral and ineffective.  Killing is immoral per se.  When done wholesale by the State, killing is specifically proscribed by international agreement.  Reducing healthcare spending this way is counter-productive: it actually increases net costs.

As reported by Dr. Atul Gawande in The New Yorker, Dr. Joel Brenner proved that the best way to cut long-term health care costs is to spend whatever it takes to restore people's health and then keep them that way -- healthy and long-lived.  That is both cheapest and best, for individual Americans as well as for our nation.

Deane Waldman, M.D., MBA retired from medical practice because "I cannot practice good, ethical medicine under ObamaCare."  He is a regular AT contributor; the author of Uproot US Healthcare, as well as Not Right! -- Conversations with We The Patients (June 2013), and adjunct scholar for the Rio Grande Foundation, a public policy think-tank in New Mexico.