Resentment of the rich trumps all else in liberalism, and we are defending against a multi-front class war. President Obama is using a shotgun approach to redistribute your wealth, with multiple attacks on your income, property, savings, and cost of living.  These coordinated attacks started after the 2008 election and are now set to hit critical mass in his second term.

You may be hearing about the automatic tax increases in the fiscal cliff, plus additional tax increases President Obama is negotiating with Speaker Boehner.  But you won't hear much about liberalism's most powerful, and silent, redistribution tool: inflation.

How is inflation redistributive?  While not actually taking from one and giving to another, inflation satisfies the first step of the two-step redistribution process:

Step One: Reduce the wealth of the bourgeoisie.

Step Two: Increase the wealth of the proletariat.

The liberals, progressives, communists (or whatever label you're using these days) never achieve their redistribution goals, as they often fail at or before Step Two.  But for them, this is okay.  In their zero-sum world, a dollar taken from one must have been given to another.  Therefore, the redistribution effort is seen as a success, by them and in hindsight, if only Step One occurred.

We have seen this before.  Lenin triggered inflation to eliminate the Tsarist monetary system, which he planned to replace with centrally-managed rationing.  He increased the money supply twenty-five fold.  Lenin said:

The way to crush the bourgeoisie is to grind them between the millstone of taxation and inflation.

Inflation is triggered when either the money supply increases faster than the economy (quantitative easing), or when the supply of goods is reduced (Corn - biofuel demand plus the 2012 drought).  Inflation causes uncertainty about future purchasing power, creates inefficiencies, and stifles productivity. Since the economy is a total of all goods rather than the total of all currency, the real money is not the $3 in your wallet but the gallon of milk in your fridge. 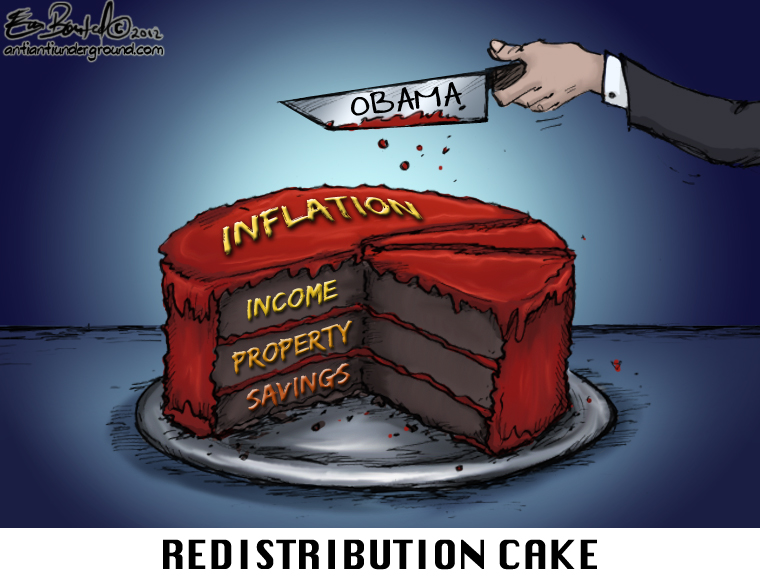 Despite the price increases you've seen in the grocery store, our government's recent Cost Price Index (CPI) is suggesting mild inflation at 2.2%.  Do you trust a report from this government more than your grocery receipt?  Your dollar buys less today than it did in 2008, and it will continue to lose value.  Expect this to get worse in the post-cliff economy, as Ben Bernanke continues his quantitative easing with President Obama's implicit support.

Some say precious metals are a safe haven in an inflationary period.  The canaries in the mine include Montana state representative Jerry O'Neil when he recently asked his state to pay him in gold and silver.  Here's the preface to his request:

It is very likely the bottom will fall out from under the US dollar.  Only so many dollars can be printed before they have no value.  The Keynesian era of financing government with debt appears to be close to its demise.

But, are metals really increasing in value?  Or are the metals' purchasing power constant and the value of our currency decreasing?  The latter is true at our hat store (CommieObama.com).  Starting Election Night 2012, we pegged the price of our hat to an ounce of silver.  November's hat price was $32.13.  December's price is $33.64.  Every business is making these adjustments, albeit in a more opaque manner.

In theory, Bernanke's Fed exists to monitor inflation and adjust the money supply and interest rates accordingly.  But the endless quantitative easing and near 0% rates suggests the Fed has lost control.  Hyperinflation occurs when this type of mismanagement runs amok.

When hyperinflation dilutes currency beyond usefulness, a currency swap becomes necessary.  A currency swap is to a stock split what a bread line is to a line for the next new iphone.  In 1922, Lenin exchanged 'new rubles' for old rubles in a 1-for-10,000 swap.  In March 1924, two months after Lenin's death, Soviet Russia issued another ruble with the exchange rate of 1-to-50,000.  By then, all the banks had closed and any faith in the currency was gone.  Stalin did not complain about inheriting a bad economy because the elimination of private wealth (Step one) was always the goal.

At Lenin's death in 1924, the inflation rate was approximately 5,000,000%.  By comparison: 1923 Germany: 3.817B% inflation.  Zimbabwe, just four years ago: 4.700B%.  Despite the warnings, each of these hyperinflation events was triggered by overprinting the nation's currency.

For perspective, today's $3.15 gallon of gas would cost this much next month:

Unfortunately, this assault on our wealth will continue non-stop regardless of who controls Congress.  President Obama was smart to take advantage of super majorities to pass the most destructive policies of his administration, Stimulus and ObamaCare.  His other attacks on our savings do not require majorities in Congress, nor any more effort.  The Bush-era tax cuts are set to expire, as are the rules limiting the Alternative Minimum Tax.  The new tax on the sale of a house, another ObamaCare tax, begins in January.  Mortgage deductions are also on the chopping block, with significant Republican backing. And the icing on this redistribution cake, Comrades? Inflation.

Karl blogs at Ushanka.us and can be reached at ushanka.us@gmail.com.