Warning: mysqli_free_result() expects parameter 1 to be mysqli_result, bool given in /var/www/html/americanthinker/admin/common/functions/func.general.php on line 126
 Why Obama Will Lose All Three Debates - American Thinker
|

Why Obama Will Lose All Three Debates

President Obama had a terrible debate last week.  Supporters and opponents were shocked that he could be so off his game.  They shouldn't have been.  That they were indicates that they don't understand Obama's serious, likely insurmountable re-election problem.

Obama supporters and detractors expect the old Obama to show better form in the next debate.  But that is not going to happen!  It cannot, because Obama's critical problem is not correctable.

The media seemed more surprised by Obama's performance than Romney's.  It was Romney who was the surprise and exposed Obama's Achilles heel.  Daniel Henninger observed (my emphasis added):

... no one expected or predicted that Barack Obama could be so pushed off his game or look so flustered in a contest of articulating ideas.

Obama's problem, to put it politely, is his looseness with facts.  He is the quintessential "sound-bite" president.  Truth for him is whatever he chooses it to be, whatever is necessary to turn things in his favor.  His self-aggrandizement and arrogance, coupled with a hero-worshiping media, has enabled him to such an extent that it is possible that he no longer believes there is truth other than what he wants it to be.  That is his problem, and it has been reinforced for most of his life.

Obama created his own fantasy bubble.  He began by inventing history in two so-called autobiographies.  Challenging anything in his self-created Alice in Wonderland world brought automatic charges of racism and other attacks from his defenders.  After years of living in his bubble, one wonders whether Mr. Obama even knows objectivity or truth.  This psychopathology was reinforced by admirers to the extent that Obama has made it a key tool in his political arsenal.

Until last week, it barely mattered.  No one called him on it.  Then Mr. Romney jumped into Obama's bubble, bursting it in front of millions of viewers.  Obama was run over by a blizzard of facts, few of which he even tried to counter.  Romney's buzzsaw approach was respectful but relentless.  All Obama could offer were empty campaign slogans and other platitudes.

Slogans and false claims may work with Kool Aid imbibers.  Non-worshipers, however, are capable of differentiating between hard data and BS.  The head-to-head conversation between these two candidates was not filtered through the media.  It was devastating for Mr. Obama.

Opinions and judgments were changed and formed during this debate.  Obama was not a beneficiary of this flux.  For viewers with any objectivity, in order to believe Obama, you had to resort to a variant of Groucho Marx's sensory question: "Do you believe what you just heard or what the media is telling you?"

The debate was a debacle for the president.  He was reduced to the empty chair used as a prop by Clint Eastwood.  His body language and his style can be improved, but not his facts.  Reality is what it is and not what he claims or wants it to be.  Obama is unable to stand up to a principled, respectful, prepared opponent wielding facts and truth.  Romney's courage and performance were impressive, but they could not have been successful without the truth on his side.

Truth may be suppressed for a while, but it ultimately breaks out.  Two former presidents observed its importance in the role of governance:

I am a firm believer in the people. If given the truth, they can be depended upon to meet any national crisis. The great point is to bring them the real facts. -Abraham Lincoln

John McCain was correct regarding President Obama being better-prepared for the next debate.  He will have improved energy and cosmetics.  These improvements will matter little.  The next debate will be just as devastating.

Imagery no longer cuts it for Obama.  He needs to improve his facts, but they speak for themselves, and Romney will make sure they do.  The facts are devastating to Obama.  He cannot distort them when someone confronts him.  Mr. Romney lives by facts -- a practice necessary to be successful in business.  He will come to the next debate with at least as many as he exhibited in the last one.  If he brings the temperament of a golden retriever and the instincts of a pit bull, Obama may not show up for the third debate.

To understand how hopeless President Obama's case is, one need only understand economic conditions.  Romney does, and he has the skills to communicate these issues.  Obama cannot deal with the facts, as they all go against him.  That is his problem, and it is insurmountable so long as Romney counters his false claims.

DirectorBlue puts Obama's problem into perspective with a devastating comment and chart:

As Investors Business Daily puts it, President Obama's case for reelection rests on five economic claims, every single one of which is false. Every. Single. One. 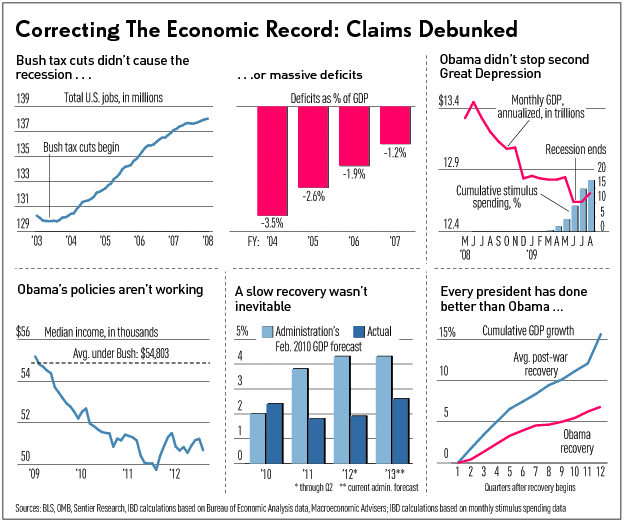 So long as Romney sticks with these basic facts, Obama is helpless.  The next debate is "town hall style."  It may provide a bit more protection for the Liar-in-Chief, depending upon the ground rules.  That remains to be seen.

In a one-on-one conversation, Obama is toast!  Even with a teleprompter, the facts destroy him.