Warning: mysqli_free_result() expects parameter 1 to be mysqli_result, bool given in /var/www/html/americanthinker/admin/common/functions/func.general.php on line 126
 Dreams from Ann Dunham's Girlfriends - American Thinker
|

By Don Wilkie and Jack Cashill

In a recent article, "Dreams From Governor Abercrombie," the relentlessly false claims Hawaii Governor Neil Abercrombie made concerning our president's birth were exposed.  Upon examination, it appears that Ann Dunham's girlfriends from high school were having "dreams" just as fanciful as Abercrombie's.

Like Abercrombie's story, the girlfriends' early versions of Ann's visit to Seattle track with details from Obama's autobiography, Dreams from My Father.  This is the same story Obama rolled out in both convention speeches -- the "improbable love," the multicultural marriage, the hopes for Barry's future.  Unfortunately for Abercrombie, Susan Botkin Blake, and Maxine Box, we now know that their recollections are in no small part erroneous.

The question that needs to be asked is whether these recollections were innocent or orchestrated.  The evidence suggests the latter.  The evidence also suggests collusion between the storytellers and the major media to shape the narrative to fit the myth of the charmed multicultural family upon which Obama built his candidacy.  To see how dreamlike are the girlfriends' memories, one need only analyze the story they tell of Ann's "visit" to Seattle with baby Obama.

In a March 27, 2007 video interview, Blake said artlessly that "[Ann] came to visit briefly one afternoon in 1961 when Barry was just a few weeks old."  Blake recounts how the baby "pooped," and she ended up changing his diaper.

By January 2008, Blake has begun to add convenient detail.  In a Puget Sound Business Journal article, she recalls that she and Ann had kept in touch by mail, that Ann said she "was in love with an African exchange student from Kenya," and that in spring 1961 she "wrote to say she was marrying him."  As to the late August 1961 visit, Blake tells that story much the same as she had in 2007 -- "He was sweet and pink and very new"-- but she adds the detail that Ann was "on her way from Hawaii to join her husband at Harvard."

In a February 2008 Seattle Times article, Maxine Box echoes Blake.  According to the Times, "Box last saw her friend in 1961, when she visited Seattle on her way from Honolulu to Massachusetts, where her then-husband was attending Harvard."  Adds Box, "She seemed very happy and very proud.  She had this beautiful, healthy baby.  I can see them right now."

Box also claims that Ann told her earlier, presumably by mail, that she had "met a Kenyan grad student named Barack Obama" and that "they married and had a son."  According to Box, "the marriage fell apart a few years later."  It would seem that by early 2008, both women had aligned their story with the official narrative.

In summer 2008, conservative author and truth-teller Michael Patrick Leahy interviewed both women for his book, What Does Barack Obama Believe.  Blake embellishes the story she has been telling about the late August visit: "[Ann] was very excited about her new life, and her husband.  She was nuts about [Obama Sr.], crazy in love."  Blake also adds a clarifying detail: "She left [Hawaii] just as soon as she had clearance from her doctor to travel with her new baby."  In his conversation with Blake, Leahy got the sense that Obama Sr. had not been present for the birth, and he certainly did not prevent Ann from leaving with the baby immediately afterward.

According to Leahy, a week or two after the Blake visit, Ann stopped by to visit Box.  Box relates essentially the same story Blake did.  "Ann was only a year out of high school and was already married with a child," she told Leahy.  The baby was brand-new.  "She was on her way to join her husband," she adds, "but I don't know where."  In this retelling, neither Blake nor Box ever saw Ann again.

From early 2008 on, Blake's and Box's recollections agree with the fable in Dreams: Ann and Obama Sr. were madly in love.  He left Ann to go to Harvard, and she followed, with child in tow, to be with him.  These recollections, however, are simply impossible.  In reality, Ann Dunham was not "visiting" Seattle.  She moved there by August 1961 and began class at the University of Washington that fall semester.

Ann could not have been on her way to Harvard or even have mentioned Harvard.  No one, including Obama Sr., knew he was going to Harvard until May of 1962.  Blake, however, anchors the date of the visit to late August 1961 by referring to a young baby, "pink and very new."  If we accept the president's date of birth as August 4, 1961, then Blake has to be talking about 1961.  In fact, she describes the baby as being about "three weeks old," a much too specific recollection.

Blake's description of Ann as being "nuts about him, crazy in love" does not mesh with reality.  Ann had just left Obama Sr. for good.  The marriage, if indeed there was one, did not fall apart "a few years later" as Box stated.  It had already fallen apart.

In an August 2008 Washington Post article, ace reporter David Maraniss took a crack at telling the Obama origins story.  Despite the fact that he was writing a lengthy biographical piece on the next president three months before the election, and in the Washington Post, no less, Maraniss made a hash of it.

Maraniss acknowledges that Obama Sr. graduated from the University of Hawaii in June 1962.  "Then," he writes, "before the month was out, he took off, leaving behind his still-teenage wife and namesake child."  By "behind" he means Hawaii.  As Maraniss tells it, Ann and the baby followed Obama Sr. to Harvard, but first they stopped in Seattle for a visit.

Yes, Ann drops by Blake's mother's house with the baby for iced tea and sugar cookies, but here Blake's story changes again.  "[Ann] was on her way from her mother's house to Boston to be with her husband," she tells Maraniss.  "[She said] he had transferred to grad school and she was going to join him."  Blake adds, "She seemed so confident and self-assured and relaxed.  She was leaving the next day to fly on to Boston."

"But as [Blake] and others later remembered it," Maraniss writes, "something happened in Cambridge, and Stanley Ann returned to Seattle.  They saw her a few more times, and they thought she even tried to enroll in classes at the University of Washington, before she packed up and returned to Hawaii."

Here, virtually every fact is wrong.  Ann's friends saw her in 1961, a year before Obama Sr. went to Harvard, and she did enroll at the University of Washington.  In late August 1962, Ann was not coming from her mother's house in Hawaii.  She was residing in Seattle.  She had been in Seattle for at least a year and certainly had no intentions of "leaving the next day" to see her husband in Boston.  There is no reason to believe she ever went to Boston.

With the spring 2010 publication of The Bridge, New Yorker editor David Remnick became the first orthodox scribe to concede that Ann actually moved to Seattle with the baby.  Leahy, by contrast, had figured this out in 2008.  Remnick buffers the news of the move by claiming that Ann took "extension courses" in the fall and implies that she did not arrive until the winter.  This finesse allows for at least a few months of happy family life in Hawaii.

In the Remnick book, Blake fully endorses the official phony narrative: Ann falls in love, flies off to Maui to get married, and then visits Blake in Seattle with the baby.  "I was so impressed by how relaxed and calm she was when she had Barack -- she was excited about going to Africa -- and how in love she was, how her husband was going to take a serious role in government."  Observe that now Ann is going to Africa, not Cambridge.

As cause for the breakup, Blake cites the excuses Obama had offered in Dreams: a hostile father-in law, Mau-Mau uprisings, and the "beheading [of] white women."  As to the timing of the breakup, Remnick offers no real clues.   He does, however, say that Ann and the baby followed Obama Sr. to Cambridge in the fall of 1962, "but the trip was a failure, and she returned to Hawaii."

Four years after his 2008 article, Maraniss's book, Barack Obama: The Story, was published.  By now, he was acknowledging that Ann had moved to Seattle in August of 1961.  This fact forced him to change the date of the "visit" from 1962 in his earlier version to 1961 while keeping many of the details the same.  In this new version, Ann is still drinking lemonade and eating sugar cookies at the Blake house with her newborn, but all talk of happiness, excitement, and future trips to Cambridge are gone.

Here, too, we catch Maraniss in a likely bit of literary fraud.  In the original 2008 version, which is repeated in his 2010 book Into the Story: A Writer's Journey Through Life, Politics, Sports, and Loss, Maraniss quotes Blake as saying, "She seemed so confident and self-assured and relaxed.  She was leaving the next day to fly on to Boston."  In the 2012 book, he quotes her as saying that Ann appeared "so confident and self-assured and relaxed.  She nursed him and was burping him, and oh, he pooped, and she handed him to me -- 'Here, Botkie.'"  Unless Blake just happened to begin each sentence with exactly the same word sequence years apart, Maraniss inserted the Boston quote on his own.  He does not give a date for his interview with Blake in the book.

Looking at the many versions of the "visit," one sees that as conflicting facts have been revealed in the conservative blogosphere, recollections have been conveniently modified to fit them.  From the initial version of a young woman, "crazy in love," stopping off in Seattle in 1961 on her way to see her beloved in Boston, we subsequently are told that the "visit" really happened a year later in late summer 1962 when Obama Sr. was at Harvard.

When it becomes clear that Ann had moved to Seattle and was never on her way to see her husband in Boston, the "visit" is reset to 1961.  In this final version, a somewhat subdued and cryptic Ann is on her way, in Maraniss's words, "to bigger and better things," not Kenya or Cambridge.

How do we explain that all three narrators -- Blake, Box, and Abercrombie -- remembered events that validated the fictional story told in Dreams and then amended those stories to fit newly revealed facts?  One has to wonder whether these three were told what to remember by someone who wanted to protect the official story.  A complicating factor, of course, is that mainstream authors like Maraniss and Remnick were helping the women protect the myth of Obama's origins.  Abercrombie did not need help.  He is a self-actualized serial dissembler. 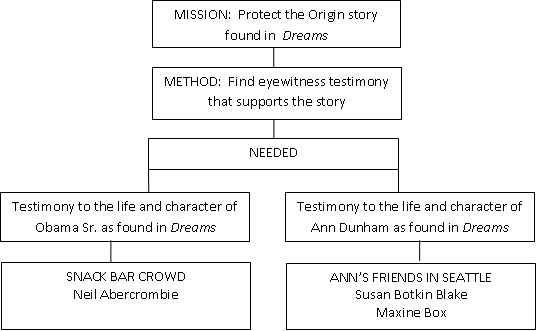 Did Team Obama knowingly defraud the public?  Were Abercrombie, Blake, and Box instructed to confirm a story the candidate and his people knew was false?  Was the false story peddled to get our Obama elected?  If Abercrombie, Blake, and Box were encouraged to lie about something this basic, the rational man has to wonder what else Obama is hiding.