Despite much evidence to the contrary, a recent Gallup poll indicates that Barack Obama's scam of "what I inherited from eight years of Bush" is still working -- with some 68 percent of Americans still believing that George W. Bush is primarily responsible for America's ever-exploding budget deficits, our painfully high and long-lasting rates of unemployment, and our incurably anemic rates of economic growth.

But as the 35-year chart displayed below clearly demonstrates, this "inheritance" was not from the relatively healthy and steadily improving George Bush economy of 2004-06, but rather from the disastrous Pelosi-Reid congressional economy of 2007-08.

It is that post-Bush economy (with its loud anti-Bush promises of higher taxes, of larger deficit spending, and of radical "carbon-footprint" regulatory crack-downs) that Obama actually inherited in early 2009 -- and that two years earlier had given birth to the OPRAH (Obama-Pelosi-Reid-And-Hillary) Land Economy of today.

This was a Democrat-dominated congressional government that had already spent two years undermining the Bush-Cheney economic successes of 2004-06 -- at the end of which unemployment was a low 4.7%, the Gross Domestic Product was a healthy 3.5%, and deficit spending was substantially down for the third year in a row to only about $160 billion in 2006.

Yet today, the underrated Bush policies that brought us to these clearly headed-in-the-right-direction results, which were very much on the same positive trajectory as the Clinton-Gingrich trends of the 1990s, are today demonized by Obama's blame-gamers as "the failed Bush policies that put us in the ditch."

Urgent Need for a New Narrative

The fact of the matter is that this is a patently false narrative based on a superficial and highly misleading comparison of eight awful years of Bush versus only three heroic "hope and change" years of Obama.  We need a truthful new counter-narrative, designed to compare instead:

(a) George W. Bush's first six years in office -- called "Bush Country" for short -- when he had a solid, pro-growth Republican Congress to work with, versus

(b) the next six years of what we should call the current "OPRAH Land" Economy, which we are now enduring and which will almost surely get "Progressively Worse" if Obama and his "green jobs economy" entourage are re-elected. 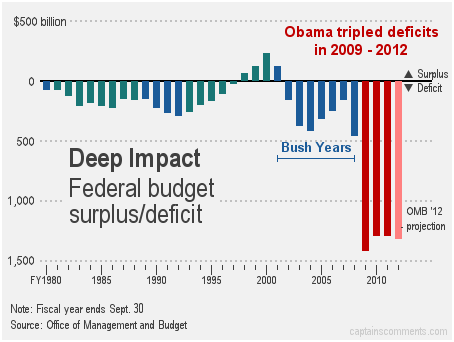 By this correct depiction of Bush Country versus the OPRAH Land Plantation, the disastrous history of the latter -- i.e., the tax-and-spend "Age of Obama"-- began not three and a half years ago, but fully five and a half long years ago, in January 2007.  Thus the six-versus-six comparison set forth above.

This was when the very aggressive "vampire taxation" and highly partisan Pelosi-Reid Congress (with Barack Obama and Hillary Clinton as by far the two most "Progressive" senators often leading the charge) were very effectively relegating an outgoing President Bush to the status of a de facto "lame duck."

It was from this two-year Congress of Bigger Government, with its accompanying expectations and scary prospects of either Hillary Clinton or Barack Obama in the White House for the next four years, that a steadily improving Bush economy of 2006 began to stagnate and then fall apart in 2007.

Capital formation was put on hold.  New hiring dried up.  Nonsensical "cap and trade" energy policies seemed almost inevitable.  The Democrat-inspired Fannie Mae and Freddie Mac "housing bubble" burst.  Consumer and business confidence began to collapse -- and by early 2008, the entire U.S. economy was plunging headlong into the unmitigated disaster that Obama inherited in January 2009 -- not from George W. Bush, but from a "Progressively Worse" Pelosi-Reid Congress.

And while endless blame-game charges of Bush's (and now Romney's) so-called "outsourcing" of jobs to foreign countries have gotten enormous attention, virtually no mention -- almost as though the correct words do not exist! -- is ever made of:

(a) Obama's relentless "OutForcing" of jobs and capital investment, via a dozen or more disincentives and impediments listed below;

(b) his ruthless "DownForcing" of most major domestic fossil energy supplies, with a "Great LEAHP Backward" goal of Less Energy At Higher Prices; and

(c) his de facto "Cremation" of jobs by ruinous over-taxation and over-regulation, described in detail in this author's earlier American Thinker essay here.

Closely related to the graphic depiction of deficit spending presented above is the need for an equally accurate picture depicting more clearly and in multiple frames of reference the complex and often "doctored" subject of unemployment and other workforce statistics -- as displayed in the three-part ShadowStats.com trend-line chart which appears below.

As this three-level display shows, the Age of Obama has produced not a recovery, but rather the longest period of deep unemployment since the Great Depression.  Even today, more than 50 months after the 2008 recession started, the U6 unemployment rate of both unemployed and under-employed is still over 15%.

And that does not include all the discouraged workers who have fled the workforce under Obama's economic oppression.  The unemployment rate with the full measure of discouraged workers is reported at www.shadowstats.com as about 23%, which is a depression-level catastrophe -- with over 5.6 million who are long-term unemployed for at least 27 weeks, or more than 6 months. 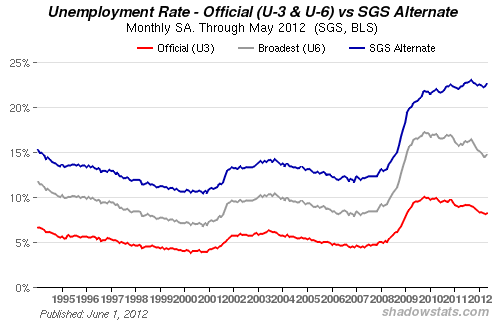 Note: If earlier figures are available, this chart should include Reagan #1 through today -- and should be updated and modified to distinguish clearly between each of the successive administrations from 1980 to the present.

A D.C.-area attorney, writer, and national security strategist, Jim Guirard was longtime chief of staff to former U.S. Senators Allen Ellender and Russell Long of Louisiana.  His TrueSpeak.org website is devoted to truth in language and truth in history in public discourse.