Warning: mysqli_free_result() expects parameter 1 to be mysqli_result, bool given in /var/www/html/americanthinker/admin/common/functions/func.general.php on line 126
 Hungary Vexed by Specter of Anti-Semitism - American Thinker
|

Hungary Vexed by Specter of Anti-Semitism

"Study has always been our religious duty as Jews. Our exclusion from society has given us an ability to adapt to others and to sense connections between things that seem diverse. But if you feel you have power, you are mistaken." -Ignatz Sonnenschein in the 1999 film Sunshine

Now that Csanád Szegedi, the leader of the controversial right-wing Hungarian nationalist party Jobbik, has resigned, it is worth looking into the complexities of Jewish life within Budapest.

Szegedi, 29, is Hungary's far-right lawmaker who stepped down last week at the request of the party's leaders.  The Anti-Defamation League has described the Jobbik Party as "openly anti-Semitic."

"Effective immediately, I resign from all my posts and functions in Jobbik," Szegedi wrote in a communiqué released last week.  "The resignation is meant to prevent further attacks against Jobbik by enemy forces."

According to Jobbik's website, party leaders asked Szegedi to step down following reports in the media that he offered someone money to conceal the news of his Jewish heritage.  While Szegedi denied this allegation "categorically" in June, it was revealed in an interview for a far-right publication that his grandmother, Magdolna Klein, was a Jewish Holocaust survivor.

Jobbik, the Movement for a Better Hungary, is a radical nationalist political party, seen by scholars and the press as fascist and anti-Semitic.  It describes itself as a "principled, conservative and radically patriotic Christian party whose fundamental purpose is the protection of Hungarian values and interests."  It is also Hungary's third-largest party.  It has aligned itself with anti-Semitic groups including one police unit that wrote in a 2009 newsletter, "[G]iven our current situation, anti-Semitism is not just our right, but it is the duty of every Hungarian homeland lover, and we must prepare for armed battle against the Jews."  This is a testament to the state of racist incitement and anti-Semitism within Hungary for which the Jobbik Party has been seen as a chief instigator.  Different incidents in the last few years have caused citizens alarm. 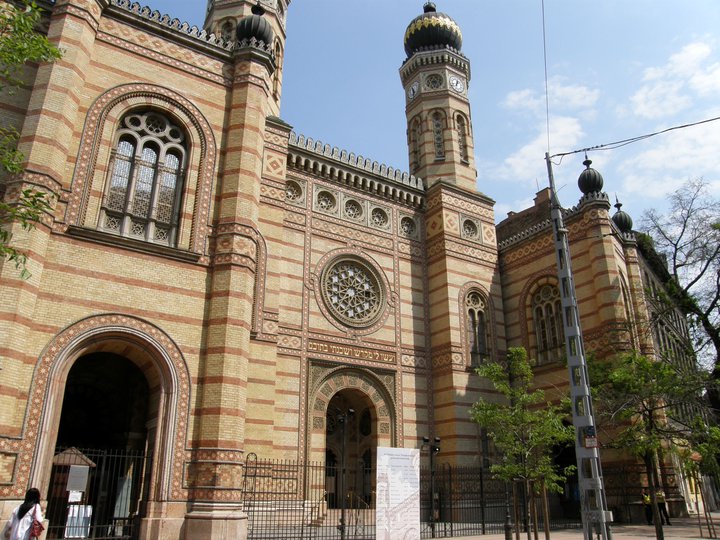 So how can one gauge the pulse within Budapest's streets regarding anti-Semitism?  In the past twenty-five years, specifically, the country has sought various ways to mend its nefarious past, as it was once a member of the Axis Powers.

"The revulsion against Jews rather pertains to those who are doing business in Hungary as investors," says Budapest native Marianna Kruppai.

"The popularity of the [Jobbik] party has significantly increased lately, which is really sad because they maintain anti-Semitism not just toward Jews, but other minorities," she added.

In July 1988, thousands of Hungarian Jews gathered for the groundbreaking at the Holocaust Memorial, commissioned by the U.S.-based Emanuel Foundation for Hungarian Culture.  At the time, several hundred people, mostly Holocaust survivors, gathered to mark the anniversary of the day Hungary officially called off the deportation of Jews.

The Holocaust Memorial, which stands behind the Dohány Street Synagogue (left), on the site of the Jewish Ghetto, is the location of a mass grave where five thousand Jews killed by the Nazis are buried.  The memorial is the unique granite and steel structure in the shape of a weeping willow, designed by Hungarian sculptor Imre Varga.  The leaves bear victims' names with the inscription "whose agony is greater than mine."  Each silvery frond has the name of a Hungarian Jewish Holocaust victim inscribed on it. 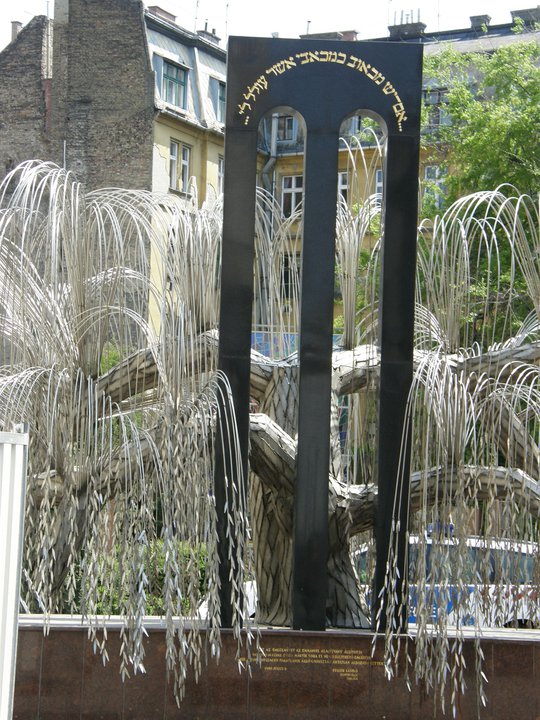 For Jewish diplomats and political leaders, Hungary remains enigmatic as to its political fate.  Although an open and pluralistic democracy, it also has a very troubling past.

"There is a concern in Israel and the Jewish world over a resurgence of anti-Semitism in Hungary," Israeli Prime Minister Benjamin Netanyahu said in a meeting with visiting Hungarian President Janos Ader.

"Such a dangerous phenomenon must be uprooted before it can spread," he added. 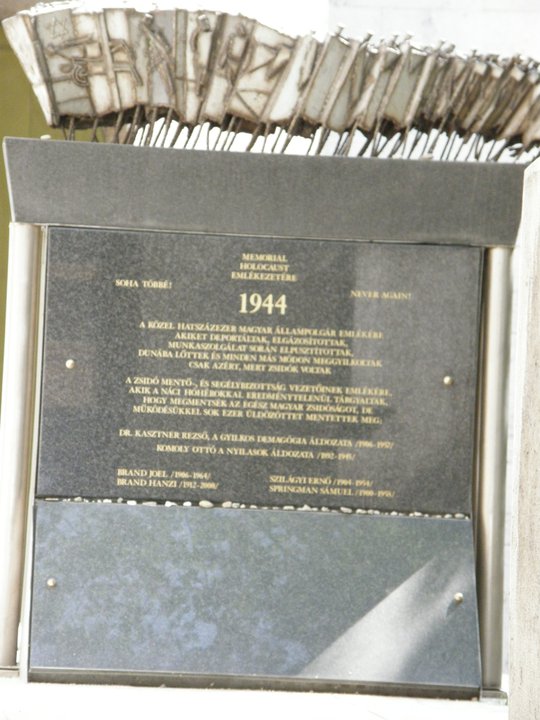 that "the problem in Hungary is not just with the worrying rise of anti-Semitic statements and incidents by extremists, but with the fact that it has become part of the common talk among the more mainstream conservative leaders."

"The fact that elected politicians in Hungary make use of the old anti-Semitic ploy by targeting the Jews as scapegoats for Hungary's ills and [that] other more mainstream leaders help to rehabilitate fascist ideologies puts Hungary in the worst position among European countries.  This brings back shocking memories from Hungary's black days in World War II."

István Szabó's 1999 film Sunshine chronicles a Jewish family who lives through the first three generations of the 20th century.  We see a sweeping epic that goes through two world wars, the Holocaust, and post-war Communism.  Each generation in the family must decide whether family and tradition is as important as prestige and status.  In Hungary, assimilation seemed like a viable option for the Jews, and yet the film suggests that their fate is de facto doomed; the dangers of assimilation can cause even greater harm to one's own soul.

Despite these troubling developments, there is still hope.

"I think that the ... Jewish population is treated in a normal way by non-Jew Hungarians," Ms. Kruppai said.  "There are many Jewish elementary and high schools, and a Jewish university in Budapest. They have synagogues and restaurants; they can keep their own traditions and I don't think there would be a confrontation with non-Jews. ... I've never noticed such a thing."

Jared Feldschreiber is a journalist and writer.  His prolific stories of interest often chronicle ambassadors, officials, and dissidents.