An odd tale of marital tension may be playing itself out before the nation's eyes, as Michelle Obama devotes herself to cajoling Americans into eating healthier food and exercising more while her husband eagerly stuffs his face out on the hustings with the junkiest of junk food.

He does it so often that Michelle's allies, The Physicians Committee for Responsible Medicine, have publicly called for President Obama to stop "eating unhealthy foods like hot dogs or pepperoni pizza that contain processed meat, or cheeseburgers or hamburgers that can contribute to obesity," in publicity photos.

Yet the president persists, flagrantly flaunting fast food Monday in Atlanta, at the V

arsity that city's temple of chili dog splendor. Andrew Malcolm of Investor's Business Daily waggishly captioned him blessing the fast-food counter clerks there.  President Obama has visually desecrated his wife's holy mission so many times, so publicly, that it has gone from being a "naughty schoolboy" rebellion to something a bit more disturbing. Mr. Obama is pu

blicly humiliating his wife, mocking the goals to which she has given her heart and soul.

It being uncouth for neighbors to gossip about the marital troubles of their friends in polite company, the beltway press stays away from probing the question of what all this theater shows a 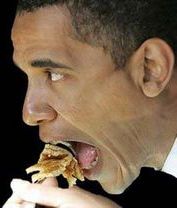 bout the emotional state of the first couple, and what it tells us about the character of Barack Obama. He is acting out a drama, and it is a story written by a narcissist.

Think back to Obama's gift of a set of movies on DVD to partially blind British Prime Minister Gordon Brown.  Narcissists often have a mean streak when it comes to people who have a weakness they don't share.  My bet is that the thin Obama likes to stick it to people who have problems wa

tching their weight and I expect that includes Michelle.  Neither of her parents seem naturally thin people and Michelle is at the age where women often have problems keeping the pounds from creeping up on them.  Because he's passive aggressive by nature and because his political goose would be cooked with many black voters if she got fed up and left him, he won't cross Michelle in person. That doesn't mean he doesn't relish rubbing her nose in the coverage of him chowing down on at greasy spoons,  as he notes that no matter what he eats he never gains an ounce.  Indeed, narcissists can be especially mean with family because in their worldview strangers exist to be wooed while  one's family has to love you no matter what you do. Imagine how strong this im 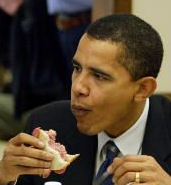 pulse can be in a politician who must constantly strive to please.

I speak from experience.  Diabetes runs on one side of my family.  I had elevated blood sugar since early adulthood and have been diabetic for decades now.  My father, his sister and several of his uncles were diabetic, as are some of their offspring.  There was a narcissist in my family who persistently demonstrated she could eat all the cake, candy and ice cream she wanted.  It wasn't ignorance.  This person knew the diabetic diet was to be heavy on fruits and green veget 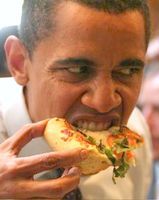 ables and limited on carbohydrates.  For the stated purpose of offering diabetic guests many choices for the starch unit at a family dinner, this narcissist's table might groan under the weight of stuffing, mac n' cheese, corn pudding, creamed peas, sweet potatoes with marshmallows, mashed potatoes with gravy and fresh made biscuits.  By contrast only one leafy green vegetable was usually offered and if fruit was on the table it was often in a dish with added sugar and fat. The narcissist would then heap their plate with all those carbs while raving about the old family recipes.  And of course there was always a dessert the diabetics shouldn't eat, especially after such a carb heavy dinner.

Nor was this behavior confined to the narcissist's own home.  As a guest in a diabetic home 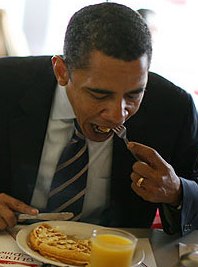 this person would insist her sweet tooth be accommodated.  When I deflected a request for "real ice cream" with the suggestion that after dinner we could walk from my place to a nearby ice cream parlor because I never stocked such things retaliation was swift.   On the next visit this person surreptitiously left behind over two pounds of regular -- not sugar free -- chocolate candy.  When I called to inquire how bags of M & Ms, Hershey Kisses and Reese's Peanut Butter cups had materialized in my pantry I was told  "I wanted you to be a proper hostess and have something on hand to offer to your guests."   By this time in my life I understood the game being played and demanded that such taunting stop, at least in my presence.  While I was no longer offered things I shouldn't eat, the stories about what the narcissist simply loved to eat did continue unabated.

The signature admonition of a narcissist is that others are so lucky to have such a wonderful spouse, par 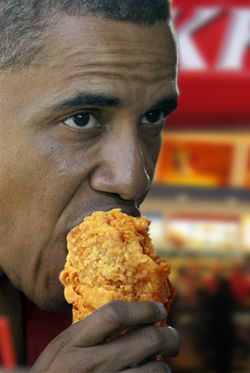 ent, boss, teacher, president, whatever. Most of the time the targets of these admonitions don't feel very lucky for trying to satisfy the narcissist is like trying to fill a bucket with a hole in the bottom.  Self destructive behavior can be alluring to those who can't or won't see that it isn't their fault that despite all that has been given what they got in return was not payment in kind but demands for even more.