Note to President Romney: On Free Trade, Start with Brazil

If Mitt Romney defeats President Obama in November, it will be in great measure because he can articulate a coherent and compelling plan for rousing America from its economic malaise.

Part of that plan will have to be returning to the formerly bipartisan idea of opening new markets for American exports -- that is, to speak bluntly, pursuing free trade.  George Bush, whatever his failings, was very strong on that issue.  Under Bush, more bilateral free trade agreements (FTAs) were enacted than under all previous administrations combined.

But under Obama's administration, only three FTAs made it through (South Korea, Panama, and Colombia).  None were new -- all had been originally negotiated under Bush, and for two years, the Democrat-controlled Congress let them languish, with Obama's tacit approval.  Only with the Republicans regaining the House of Representatives and nearly retaking the Senate did Obama belatedly move to finally push the FTAs through.

Obama, always a tool for Big Labor, bought its line that free trade "costs" America jobs.  But economists from Adam Smith on have generally agreed that free trade doesn't cost jobs; it improves them.  Free trade replaces less productive, lower-paying jobs with more productive, higher-paying ones, and society's wealth increases in the bargain.  Obama's dismal record in creating jobs and increasing social wealth should have convinced him he got the story wrong -- but it hasn't.

Romney needs to put free trade back in focus.  There is no better way for him to do this than by negotiating a new FTA, and there is no better country to do it with than...Brazil.  This would be beneficial for a variety of reasons.

To begin with, there is the sheer size of Brazil and its economy.  Brazil is a major country by any commonsense standard.  Besides being the fifth largest country on Earth geographically -- roughly the size of the continental U.S. -- Brazil is the fifth-largest demographically, with nearly 200 million citizens.  Like the U.S., it is well-blessed in terms of natural resources and a long coastline.

Also like the U.S., Brazil boasts a dynamic citizenry.  It has a work force of about 102 million people, with an adult literacy rate of over 90%.  The life expectancy for Brazilians is over 73 and rising.  Like our own country, it has a multi-ethnic population, living in a democratic republic.

It has the world's sixth-largest economy (with a GDP of over $2.5 trillion), and it is growing robustly (averaging about 5% GDP growth over the last 3 years).  It has a fairly high level of wealth -- per capita GDP being around $13,000.  And its economy is diverse, with agriculture and industry, including some very advanced industry (such as Embraer, major maker of military and commercial aircraft).

Then there is the growth of the Brazilian middle class, which is voraciously consuming American products, from Caterpillar tractors and GM cars to McDonald's food and Coca-Cola and Pepsi beverages.

Moreover, there is a natural balance of what each nation has to offer the other.  Take the most obvious example: ethanol.  We have subsidized the inefficient production of American ethanol from corn (which has driven up the price of grain), while (until recently) putting tariffs on Brazilian ethanol (produced more efficiently from sugar cane).  If there be wisdom in the use of ethanol, we should just buy it from Brazil and save money.

Historically there has been a mutual friendship and cultural affinity between the citizens of both countries, however strained the governmental relations have been on occasion.

Some may be hesitant here, because the current leftist administration in Brazil has pursued a foreign policy often at variance with our own (for example, in being friendlier to Iran than we deem appropriate).  However, this recent history of leftist government and attendant foreign policy disagreement should not make us put off pursuing an FTA with Brazil for a number of reasons. 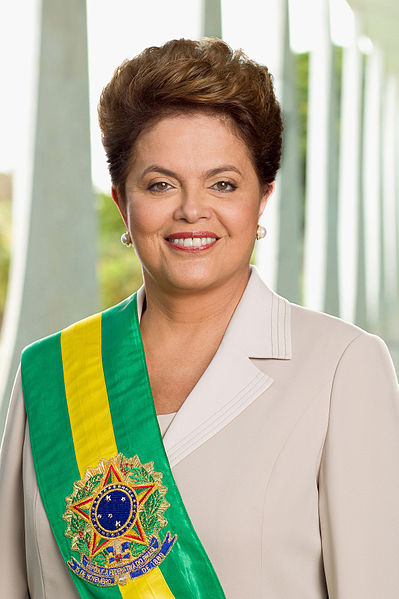 First, remember that the leftist tilt of Brazilian voters grows in great measure from the lingering memory of the right-wing military coup that occurred in 1964.  (Democracy was restored only in the early 1980s.)  This memory will take more time to die down, but die down it will as Brazil continues to move ahead economically -- middle classes rarely fall for leftist sales pitches.  In any case, it is an internal matter for Brazilian voters to worry about.

Second, while Brazil is headed by a leftist president, it is still a democracy, not at all like (say) Cuba.  In this regard, it is rather like the U.S. itself: temporarily run by a leftist administration, but likely to be more moderate in the future.

Third, one signs an FTA with another country to increase mutual trade (and thereby increase economic growth), not typically to advance a foreign policy agenda.  Free trade is an economic rather than a geopolitical concern.  We have FTAs with other countries (like Mexico and Panama) with whom we have occasional foreign policy differences.

Finally, by signing an FTA with Brazil, and thus showing our respect while increasing our mutual trade, we are more likely to get increased cooperation in other areas (such as foreign policy) in the future.

Because the Chinese managed to secure a recent FTA with Brazil, our own trade volume with Brazil, while still growing, has been eclipsed by Chinese trade.  China overtook the U.S. last year as the biggest trader with and investor in Brazil.  But the Brazilians have been disappointed with the results.  We can reclaim that lead.

It is important to note that Mercosur, the free trade block that includes Argentina, Paraguay, Uruguay, and Brazil, has been aggressively trying to negotiate FTAs.  Mercosur concluded an FTA with Israel in 2008 and one with Egypt in 2010, and is currently in negotiations with Canada, India, Mexico, and South Africa.  We need to join the party.

No doubt newly elected President Romney will have his hands full undoing ex-President Obama's numerous mistakes.  But Romney may want to consider expanding trade abroad if he has a spare moment.  He should look south.

Philosopher Gary Jason is a senior editor of Liberty and author of the new book Dangerous Thoughts.