Warning: mysqli_free_result() expects parameter 1 to be mysqli_result, bool given in /var/www/html/americanthinker/admin/common/functions/func.general.php on line 126
 Militant Nurses March for Something - American Thinker
|

Militant Nurses March for Something

Trade unionism of the clenched fist variety is a stretch for the feminine half of the population, but they do try on occasion.  Since nurses are overwhelmingly women and it would be clearly sexist to use the minority of male nurses to provide the clenched fists.  The woman have to do their best.

National Nurses United is an association of American nurses' unions.  In Canada a similar organization is more directly called the Canadian Federation of Nurses Unions. 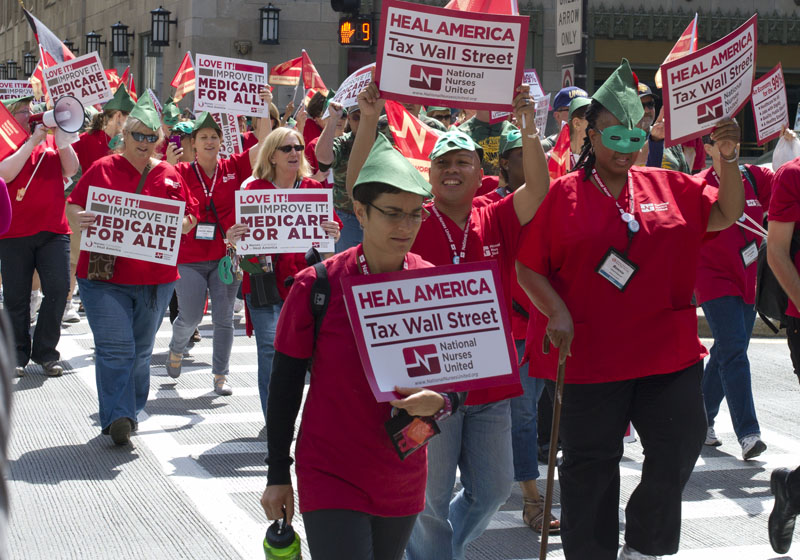 On May18, 2012 National Nurses United held a protest march and rally in Chicago as part of the generalized protests leading up to the NATO meeting.  Ostensibly the nurses were supporting the Robin Hood tax.  Robin Hood of course stole from the rich and supposedly gave to the poor.  The Robin Hood tax is a .05% tax on financial transactions that will supposedly raise $350 billion per year and greatly help the government's shortage of money for its many worthy projects.  The nurses wore Robin Hood hats and masks during their march.

According to his associate Salvatore Gravano the mafia don John Gotti viewed himself as a Robin Hood, although the reality was that he was a narcissistic tyrant with a furious temper.[1] The take from the rich and give to the poor theme has been used by all types of disreputable tyrants.  The general problem is that the supply of genuine rich people is limited so the definition of rich has to be constantly expanded.

That a .05% tax on financial transactions will raise $350 billion annually is not exactly plausible.  That amount is about 3 times the profits of all insured banks in the United States.  Either people will make fewer transactions, the huge number of transactions conducted by computer for tiny profits being a good candidate, or the transactions will be moved to more hospitable locations such as Singapore.

The goal of nurses' unions is the same as that of any other union: higher wages, more job security, less work, and less accountability.  These are things with universal appeal but usually kept under control by the checks and balances of capitalism or the limitations of government budgets.

Many of the marching nurses had "Medicare for All" signs.  They are urging that all medicine be made into a government monopoly, also known by the euphemism single payer medical system.  In Canada they already have such a system and it is even called "Medicare." It is interesting to know what kind of problems the members of the Canadian nursing unions are having.

A big Canadian problem seems to be "overcapacity protocols." This means that when too many people come to an emergency room it becomes necessary to park the patients in hallways or other locations not normally used to house patients.  Another problem is nurses emigrating to the United States, a problem Canada also has with doctors.  The Canadian government, unlike the United States, has come to the realization that it has to live within its means.  As a result the medical system gives basic care, not lavish care.  A Canadian company Timely Medical Alternatives assists Canadians in traveling to the U.S. to get private medical care.  For example a Canadian needing spinal surgery may have to wait 3 years in Canada but can get the operation in 2 weeks in the U.S.  The catch is that that it will cost $7,000 or more in the U.S.  Private care in Canada is generally outlawed or suppressed. 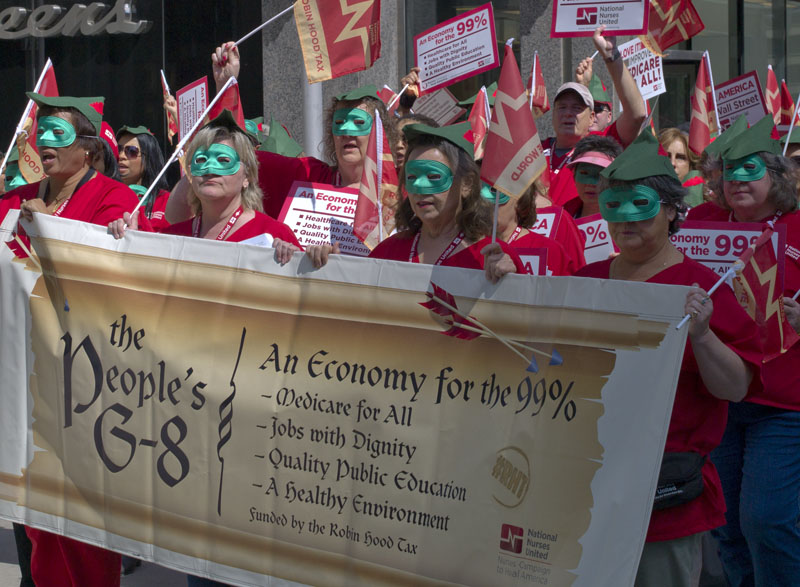 My own anecdotal experience is that emergency rooms in the U.S. used to be dreary places with long waits on hard chairs.  However things seem to have changed dramatically in the last 10 years.  My experiences accompanying others to the emergency room, in Cedar Rapids, IA or Holyoke, MA, for example, is that emergency rooms are modern wonders of high technology and they provide fast and convenient service.  Further nobody asked about payment or insurance until most of the service had been rendered.  About 6 years ago I went to the emergency room at Northwestern Hospital in Chicago for a stomachache.  I was instantly deluged with medical high technology and helpful doctors and nurses.  My insurance paid the $6,000 bill without a murmur.  Keep in mind that a high percentage of emergency room patients never pay their bills, but emergency rooms are required by law to treat everyone who walks or is carried in the door.  Apparently this works.  Emergency rooms in Miami run large billboards with an electronic sign stating the current waiting time that seems to usually be around 6 minutes.  I don't think they would be engaging in this intensely competitive advertising if they were losing money.

This is not to say the U.S. medical care doesn't have problems.  The price of a medical service depends on who is paying.  There is an official charge.  This is like the rack rate at hotels.  Only last minute guests when the hotel is booked nearly full pay this rate.  Below the medical rack rate comes the negotiated rate with insurance companies.  For example if the official charge for a certain MRI is $10,000, the negotiated rate may be $3,000.  Then comes the Medicare rate, the amount the government has decided that the Medicare system is going to pay.  This might be $1,000.  Almost no one is paying the rack rate except perhaps the king of Saudi Arabia when he comes to the U.S. for medical treatment.  If you are billed at the rack rate you should ask for at least a 50% discount.  The hospitals often call patients and offer a discount if they will only pay something.  The longer you don't pay the larger the offered discount is likely to be.  If you never pay you may be able to hide in the sea of uncollectable bills.  All the people not on Medicare are subsidizing the Medicare recipients for whom the government underpays.  This is a hidden Medicare tax.  If you try to comparison shop for medical services you will discover that no one actually knows what anything costs, although with the help of computers they do send bills.

There are pockets of capitalism in the American medical system.  There are many companies that do MRI and CT scans competing on price and service.  For example the company Medical Discounts, Inc. advertises "Discount, Cheap, Low Cost" MRI and CT scans for "people paying out of pocket with no insurance or with high deductibles." The One Medical Group in San Francisco advertises such revolutionary concepts as same day appointments, email with doctors and "no insurance, no problem."  Capitalism is peaking through the opaque, bureaucratic maze created by a well-meaning government, although Obamacare may put an end to that.

Norman Rogers is a Senior Policy Advisor at the Heartland Institute, a Chicago think tank.  He is also one of the plaintiffs in the lawsuit against the government to allow Social Security recipients to not be forced to join Medicare.