Everyone has heard of Rin Tin Tin, but Sergeant Rex is the real-life German Shepherd military dog.  By all accounts, he had a great reputation for being a superior working dog, whose duty was to patrol and detect explosives.  Two of his handlers talked to American Thinker about what makes Rex so special.  Mike Dowling wrote Sergeant Rex to honor him, and Megan Leavey never 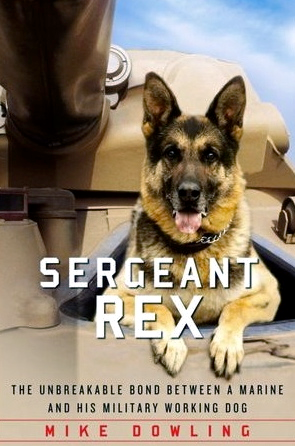 gave up her dream of being reunited with Rex after their retirement.

Rex was born in Germany in 2001, and he came to America as a puppy to go through the military dog-training program.  Mike commented that Rex had all the qualities needed for a military working dog: "Stamina, loyalty, athleticism, intelligence, and a drive to work.  In fact, he was nicknamed 'Sexy Rexy' for his handsomeness, and 'T-Rex' for his aggressiveness when necessary."

In March 2004, Corporal Mike Dowling and Rex were deployed to Iraq.  They were one of a dozen working dog teams sent to the frontlines since the Vietnam War.  Their mission was to save American soldiers' lives while enduring the dangers of trigger-happy insurgents who planted explosives.

Another informal assignment for the dog-handler team was for Rex to serve as a therapy and morale dog.  Mike told American Thinker that stress affects every single military person, yet "[t]he great thing about having Rex is that after the battle we were able to get back to the base and play with each other.  Having a dog attached to a combat unit improves people's morale.  Most everyone loves dogs, so we were immediately welcomed.  From the highest to the lowest ranks, everyone wanted to interact with Rex and talk about their own dog.  He was

able to take everyone's mind away from combat for a few minutes."

Mike and Rex were together for two and a half years, and never once did Rex forget what he was taught.  "In my book I refer to Rex as a sergeant because we as dog handlers treat our dogs as if they are one rank higher than us, even though dogs are not given official ranks.  This is to remind us that we never disrespect them.  It got to a point that I knew what Rex was going to do before he did it."  Before leaving the Marines, Mike worked with Rex's next dog handler, Megan, "giving her advice on how to handle and approach Rex."  Both Megan and Mike noted to American Thinker that they looked upon Rex not as "a dog," but rather as a Marine, a partner, and an extension of themselves, learning his mannerisms and personality.

Rex was the only dog Megan worked with, and they were together from October 2004 until December 2007.  They worked together for over a hundred missions during their two deployments to Iraq.  Megan's time with Rex was very different from Mike's because of the harrowing experience they had together.

On September 4, 2006, Rex and Megan found a large number of IEDs.  While they continued the search for more explosives, an insurgent watcher detonated an IED while Rex and Megan were directly over it.  Megan became unconscious, bursting all the blood vessels in both ears.  As she came to, even though the atmosphere was smoky, making it hard to see, and the only sound she could hear was a ringing in her ears, one of her first thoughts was of Rex: "Thank G-d Rex was attached to my flack jacket.  I made sure Rex was all right and found that he had a severe shoulder injury, had shut down, and was very scared."  They did not leave the scene of the intense firefight, instead waiting for the detonation team to arrive.  Megan received the Purple Heart for the true 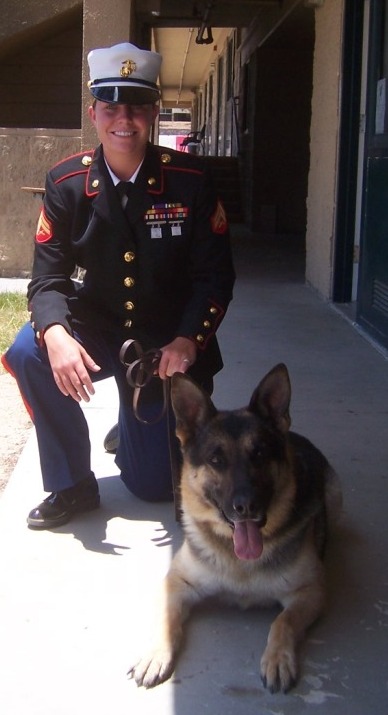 heroism she and Rex displayed.

Due to their injuries, Megan and Rex were not involved in future missions, and in December 2006, they were sent back to Camp Pendleton.  Megan's last year was spent taking Rex to physical therapy sessions and helping other Marines get ready for deployment.  In 2007, after finishing her service, she filed papers to adopt Rex.  Because Rex recovered from his injuries, he remained on active duty, so her request was put on hold.

Megan explained that military dogs are kept working as long as they are physically able because of the money invested in them (about $50,000).  She also dispelled the rumor that once a dog is no longer able to work, it is "put to sleep.  The military puts dogs to sleep only if they have a medical condition or are too aggressive and unable to adapt to pet life."

Megan felt that having Rex beside her gave her strength.  She never wavered from her determination that one day she and Rex would be together.  She stayed in touch, calling Rex's handlers on a regular basis.  A year after leaving the Marines, she visited Rex at Camp Pendleton, enjoying their time together since "everyone knew Rex was my dog.  All I wanted was to be reunited with Rex and take care of him."

By the time Rex turned eleven, Megan had enlisted the help of the public and Senator Charles Schumer to push through the adoption papers.  After supposedly being diagnosed with facial palsy, a disease that causes the left side of his face to be droopy and numb, Rex was retired and adopted by Megan on April 6 of this year.  She noted, "I had not seen Rex in three or four years, and as soon as I took the leash, we just picked up where we left off.  It seemed like no time had passed between us."

Unfortunately, dogs do not receive veteran benefits, so Megan would have had to pay for all of Rex's vet bills.  However, she told American Thinker that guardian angels by the names of Mindy and Randy Levine, the Yankees president, came forward, paying for her trip to pick up Rex in California, as well as paying for all of the veterinary bills, both current and future.  She plans on taking Rex to the best vets in New York, where she resides, to get a second opinion about his condition.  Meanwhile, Rex is adjusting well to his new environment, living with his special person and her two other dogs -- Patriot, a Chocolate lab, and Rocky, a Shiba Inu.

It is very obvious in speaking to Megan that she and Rex have a unique bond.  "I love Rex.  We almost died together.  He helped me get through the hardest time in my life.  In his last few years he can relax, play with his toys, and we are together."

After speaking with Megan and Mike, it is apparent that they are both lucky to share a portion of their life with Rex, a special dog who is loving, loyal, protective, and amazing.