Leave it our friends in the Mainstream Media to find ways of publishing accurate numbers to create fake stories.  It's the other side of Dan Rather's fake-but-accurate coin.

A guy could stay busy simply fact-checking the fact-checkers.  In today's exercise, I look at three specific "news" articles published in recent days.

We're killing innocent men!  I'll start with a story from CBS News, headlined "Study: 2,000 convicted then exonerated in 23 years."  In case you have any doubt about whose agenda that might help, know that it was picked up and expounded upon in the Communist Party USA's People's World, under the headline "Thousands Wrongly Convicted."

There is actually nothing wrong with this AP article, factually, at least as far as I know.  The numbers are "873 exonerations" plus "nearly 1,200 other exonerations" per the story.  That totals up to "nearly" 2,073 exonerations "in the United States in the past 23 years."

Now let me give you the last sentence of the AP article:

Researchers estimate the total number of felony convictions in the United States is nearly a million a year.

I congratulate the AP for including this sentence.  (I could not find that information in the People's World, strangely enough.)  That means 23 million felony convictions over 23 years, of which nearly 2,073 have been exonerated.

Frankly, I'm glad someone is looking into this.  I don't want to be one of that 0.01%.  But I'm also relieved to see that the wrongful conviction rate is so low.  (But I would be concerned that trying to blindly reduce that rate would increase the rate of wrongful acquittals.  As an engineer, I know errors will be made.  Our choice is mostly what type of error: letting bad guys go free, or putting good guys in prison.)

However, the terms "death sentences" and "death penalty" showed up these articles.  A casual reading of these articles would alarm the reader to the effect that innocent men are being executed.  The real news should be that our felony conviction system appears to be 99.99% accurate (on the conviction side), a number and concept that shows up nowhere in these articles.

We're killing innocent men at work!  This story came from MSNBC, under the headline "More Americans died in workplace in '09 than during entire Iraq war."

First, that statement could have its wording reversed and remain just as true: Fewer Americans died in the entire Iraq war than died in one year in the home-front workplace.  But I don't think that makes the point MSNBC was trying to make.

The MSNBC story started, as virtually all media stories do, with an anecdote: "Nicholas Adrian Revetta of suburban Pittsburgh died in an explosion at a U.S. Steel plant."  It goes on to say that the latest numbers are up: there were 3% more workplace fatalities in 2010 than in 2009.

What do you think they are getting at with such a story?  Here is how the series of stories is explained in a sidebar:

[S]tories exploring threats to workers - and the corporate and regulatory factors that endanger them[.]

Corporations, bad!  Regulations, good!  Get it?

The story actually comes from The Center for Public Integrity, yet MSNBC reports it as if it were MSNBC's own.  This is pure journalism by press release.  But they use only press releases from left-wing propaganda machines, apparently.

Here are the raw data from the Bureau of Labor Statistics. 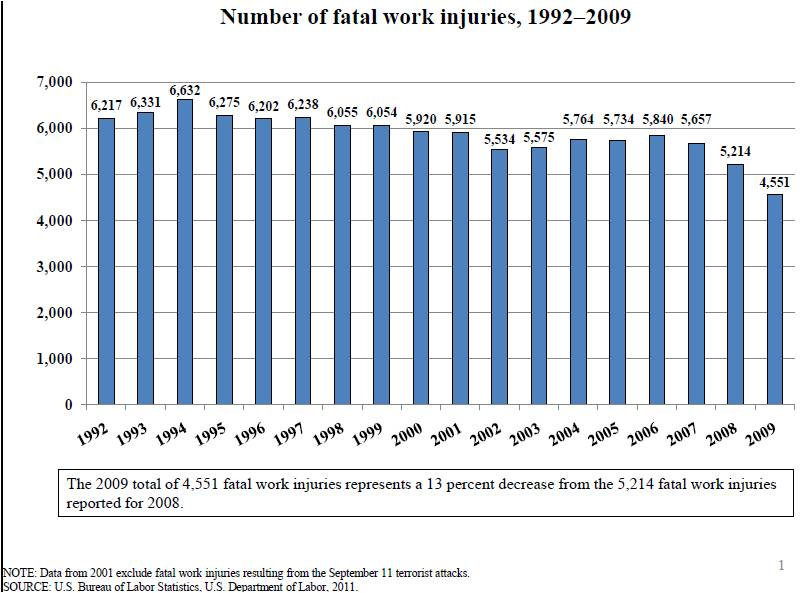 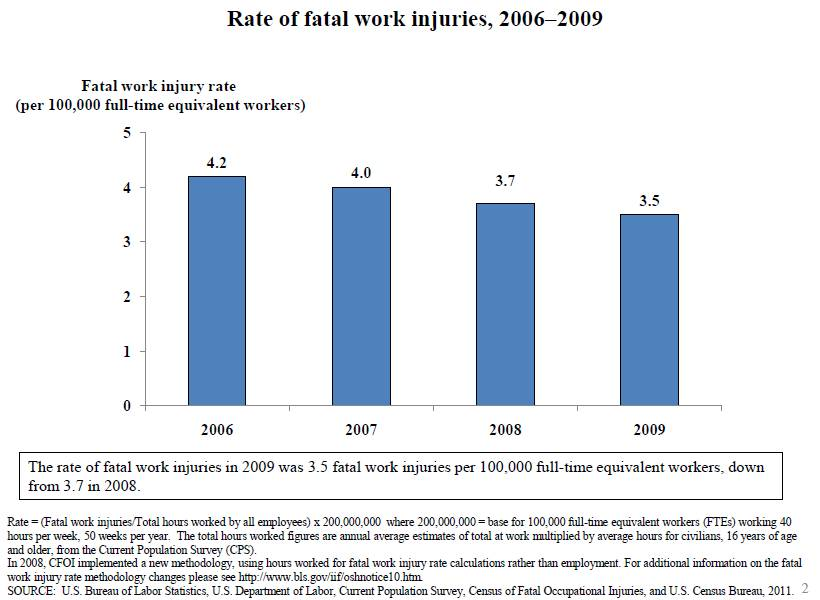 The number of workplace fatalities has been trending down for years and decades, both in absolute numbers and in the rate per worker.  While the MSNBC story reports a 3% increase in raw numbers from 2009 (peak recession year) to 2010, it fails to mention the much larger decrease of 13% the previous year (2008 to 2009), or that the numbers have been variable year-to-year on a similar scale.

Moreover, the single anecdote of the MSNBC story involved a workplace explosion.  Explosions represent less than 2% of all workplace fatalities.  How do people die at work?  The biggest cause is transportation incidents: 39% of all workplace deaths, most of which are highway accidents.  Right after that is murder in the workplace: 18%.

Like the previous story, what is actually good news is treated as bad news.  The real news is that workplace fatalities are trending down (just as they were prior to OSHA's existence -- see chart below), to the point where the things that kill people at work are the same things that kill them when not at work: vehicles and violence. 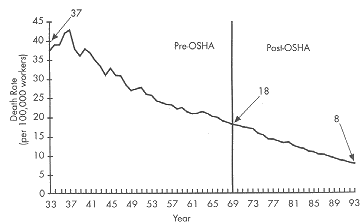 You're killing me!  Now for the whopper of all whoppers.  This one comes from Marketwatch, headlined "Obama spending binge never happened."  It comes with charts and everything.

To check on this story, simply use the White House's own Office of Management and Budget data.  As we can see in Table 1.1, federal spending in 2012 is expected to be almost $3.8 trillion.  That is the highest in history, peacetime or wartime.  In fact, it is more than the cumulative total of all years from 1789 through 1974 -- the first 186 years of our country's existence.

Of course, we need to account for inflation.  For that, let's use Table 1.3.  In inflation-adjusted dollars (2005 constant dollars), federal government spending in 2012 is expected to be (drum roll) the highest in history, peacetime or wartime.  In fact, it is more than three times what was spent in 1945, the peak year of World War II spending.  It is 25% more than was spent in 2007, the last fiscal budget written by a Republican-controlled Congress.

But that still isn't quite fair, because both the population and the economy grew over that time.  So let's look at federal government spending as a fraction of Gross Domestic Product (Table 1.3 again).  At 24.3% of GDP, federal spending in 2012 is not the highest in our history -- only the highest in peacetime prior to Obama, or from 1946 through 2008.

The author of the story, Rex Nutting, tortured the data until it told him what he wanted it to.  He did not look at absolute spending levels, but at the rate of spending, over carefully selected years.  Feel free to look at his charts, but also look at this one. 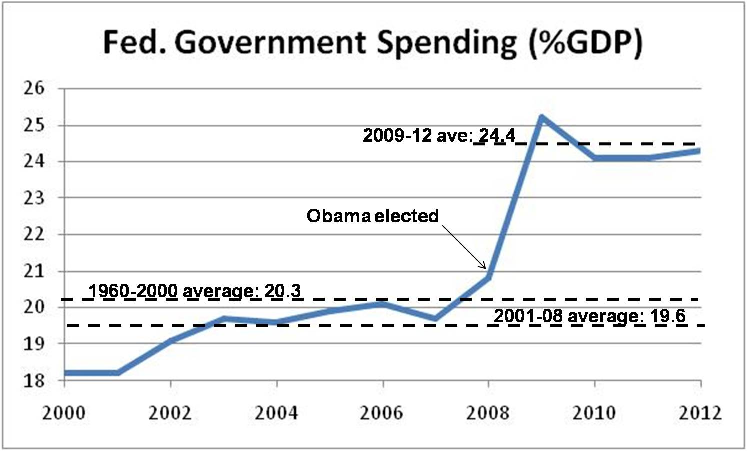 Since 2009, that annus horribilus, federal spending has been flat as a fraction of GDP.  What is left out of the story is the huge jump up in 2009.  That jump was huge any way you measure it: half a trillion dollars, an increase of over 17%, and an increase of 4.4% of GDP.  There has been no real increase of over 17% in a single year since the Korean War (1952).  And that increase has been made permanent.  (That was the crisis that wasn't wasted.)

And to whom did Mr. Nutting assign responsibility for 2009?  President George W.  Bush, of course.  You see, in Mr. Nutting's universe, Bush is responsible for a 4%-of-GDP increase in spending in a year he was in office for less than three weeks.  Meanwhile, President Obama is declared innocent for simply maintaining this huge level of spending.  See?  No increase these last three years.

What is left out of that story?  (1) Democrats took control of both the House of Representatives and the Senate in 2007, writing the budgets for both 2008 and 2009.  (They don't write them anymore; they don't need to.  They are locking in their gains.  The new normal is a federal government that's the biggest it's been in peacetime.)

(2) George W. Bush left office January 20, 2009, or less than three weeks into 2009 and less than four months into FY 2009.  Within two months of Bush's leaving, the Democrats finished the FY 2009 budget (which Bush had not signed) for an additional $410 billion and passed Obama's $825-billion stimulus.  You think maybe that Democrat-authored spending had a little bit to do with that sudden half-trillion-dollar increase?

The real story is that current federal spending is at an historical peacetime high, as it's been since Obama's inauguration.  And that massive (half-a-trillion-dollar) step up over the historical norm came when Democrats took over budgeting.

To paraphrase the late, great, and somewhat ethically challenged Uncle Walter: "and that's the way it isn't."