Warning: mysqli_free_result() expects parameter 1 to be mysqli_result, bool given in /var/www/html/americanthinker/admin/common/functions/func.general.php on line 126
 Catholic Lawsuits and the Establishment Clause - American Thinker
|

Catholic Lawsuits and the Establishment Clause

The other shoe has officially dropped.  Forty-three Catholic plaintiffs have brought twelve lawsuits charging that the ObamaCare abortion pill mandate violates their free exercise rights.  So perhaps it's time to have some fun with the issues that have been put in play.

For starters, there's the delicious irony of outfits like Notre Dame getting kicked to the curb as their reward for playing ideological footsie with a president who reeks of liberation theology.  Obama's phony offer to let the Catholics off the hook only compounds the irony: health plan providers who took the individual mandate bait are now being strong-armed into offering contraception and abortion coverage "for free."  That's a transparent scam because contraceptives and abortions will still be covered in violation of Catholic doctrine, and the cost will be passed through to the Catholics.  But the real humdinger is Health and Human Services' claim that we can trust power-crazed bureaucrats to distinguish between church-affiliated organizations with a "secular" mission -- parochial schools, Catholic colleges, Catholic medical centers, and Catholic charities -- and organizations whose mission is the "inculcation of religious values."

Just to set the record straight, I'm not a Catholic -- but I'm rooting for them, even though I have my doubts about their chances.  There's a very good reason why the ACLU and its Supreme Court enablers like William O. Douglas, William Brennan, John Paul Stevens, David Souter, and Sandra 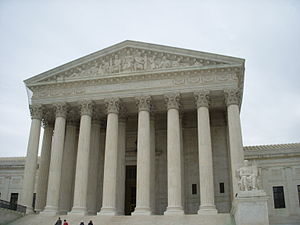 Day O'Connor serve up their free-exercise-for-atheists burgers on establishment clause buns: in an establishment clause dispute, there's no need to prove coercion or present empirical evidence of any kind.  Speculation will do just fine.  Gin up an advisory opinion that a concealed purpose to endorse religion is trampling non-adherents' free exercise rights, and bingo! -- case closed.  No real-world effect need apply.

Real free exercise suits are a whole different ballgame.  To help put the establishment clause on steroids, the Court found it useful to starve the free exercise clause into a kick-sand-in-my-face weakling.  So it would be almost shocking to see a free exercise complaint about something besides unemployment benefits -- a social justice issue that pushes its very own progressive hot button -- actually succeed [i].  Given the Court's notorious stinginess in rewarding such quixotic efforts in the name of religion, a win for the Catholics might be downright game-changing, like the new muscles in bodybuilder ads on the back covers of comics when I was a kid.

It makes perfect sense, then, that our primary source of irony is not the free exercise clause, but progressive establishment clause dogma.  For starters, the standard HHS uses to distinguish "secular" from "religious" organizational missions would never pass muster in an establishment clause setting.  According to HHS, it's the organization's service to, or employment of, non-Catholics that counts, not its affiliation with the Catholic Church or its devotion to Catholic values.  Kathleen Sebelius might as well have grabbed sixty years of progressive establishment clause dogma by the tongue and flicked it inside out.  The Court's progressives have spent decades beating it into our heads that precious little -- if any -- evidence of faith is required to establish a purpose to advance religion -- but under the HHS mandate, the "secular" mission magically trumps church affiliation the moment a non-Catholic surgeon is hired or operates on a non-Catholic patient.

A laughably narrow definition of "inculcate" -- one that mirrors Obama's habitual substitution of "freedom of worship" for "freedom of religion" -- seems to be the cause of this misalignment.  If the Supreme Court's progressives have done nothing else, they've worked overtime to sell the notion that virtually any religious expression that might possibly be construed as an "endorsement" of religion "inculcates" religion by coercing religious minorities.  So at a bare minimum, for a Catholic medical center to be "secular" by progressive establishment clause standards, it would have to indiscriminately treat and employ not only non-Catholics, but non-Christians; its board of directors could not be dominated by -- or possibly even include -- members of the Church hierarchy; it could not accept financial assistance from or provide financial support to the Church; it could not refuse to prescribe contraceptives or perform abortions and sex-change operations for religious reasons; it could not display a crucifix, a statue of the Virgin Mary, the Ten Commandments, or any other universally recognized Christian symbol; it could not provide a chapel for meditation and prayer; and its employees could not be permitted to mention God or discuss His blessing with patients and their loved ones.

That's a tough standard, one that leaves precious little room for genuine church-affiliated organizations that don't "inculcate" religious values.  But it's not an exaggeration.  It's really quite easy for progressives to discover a purpose to "inculcate" religion -- especially really smart ones like progressive Supreme Court justices.  Here's how David Souter "proved" that the legislature's "actual" purpose was to endorse religion in McCreary County v. Kentucky ACLU, a 2005 decision that kicked the Ten Commandments out of a Kentucky courthouse:

At the ceremony for posting the framed Commandments in Pulaski County, the county executive was accompanied by his pastor, who testified to the certainty of the existence of God.  The reasonable observer could only think that the Counties meant to emphasize and celebrate the Commandments' religious message [ii].

This "proof" has some interesting implications.  For instance, according to Souter, any religious expression at a public event necessarily implies an official purpose to endorse religion, ceremonials and boilerplate included.  Stranger still, to establish legislative purpose, religious expression doesn't have to come from the state legislature as a whole, an individual state legislator, or even a state legislator's family and friends.  Guilt by association, even once or twice removed, will do just fine.  And best of all, the legislature's "actual" purpose is established retroactively, just in time to strike down the law.  That's pretty hot for speculation based on anecdotal evidence.

Given that expressions of religious faith are anathema to progressives, and that almost any religious expression can establish a purpose to inculcate religion, the HHS mandate is a recipe for oppression.  No Catholic medical center could afford to accept Obama's compromise and then wait in terror for the rules to change and Cass Sunstein-style "nudging" to begin.  After all, who wants to become the next Notre Dame?

And no one should have to.  Any Catholic organization that refuses to provide coverage for contraceptives, abortion, and sex-change operations for religious reasons is by definition inculcating religion.  The Supreme Court told us so, because as the mandate's defenders have dutifully reminded us, denying such coverage in the name of moral conscience not only "endorses" religion, but "coerces" hapless women to be Catholics.

As the courtroom drama unfolds, we can amuse ourselves with the ObamaCare mandate's fractured logic and the president's utter disregard for the truth.  But what I'd really like to see is an establishment clause suit brought against HHS by the insurers.  After all, it's just not fair that secular corporations should have to pretend to foot the bill for maintaining the illusion that Catholics are obeying Church doctrine.  It would be downright fun to hear Solicitor General Verrilli defend HHS's position on that one.  The establishment clause would never be the same.

[i] As Chief Justice Burger pointed out in Bowen v. Roy, workers' unemployment benefits were one area where free exercise complaints met success, partly because the decisions focused on "protection against unequal treatment rather than a grant of favored treatment for the members of the religious sect" (476 U.S. 693, [1986], 708.  Emphasis added.).  According to Burger, decisions like Thomas v. Review Board of Indiana Employment Security Div. (1981) were not controlling in "normal" free exercise cases like Bowen because the states required former employees to show "good cause" why they were no longer working.  "[T]o consider a religiously motivated resignation to be 'without good cause' tends to exhibit hostility, not neutrality, towards religion." (Id.)