Here is how it works: a federal agency reinterprets its job to encompass whole new areas of the economy.  For example, the EPA says that the Clean Air Act allows it to create a whole new cap-and-trade system, or to outlaw the lead in bullets.  Never mind that such ideas weren't even hinted at in the Clean Air Act or in any of the laws that created the EPA.

Or the Fish and Wildlife Service decides that a lizard that lives in an area that perfectly matches the Texas Permian Basin oil fields is endangered, thus turning the west Texas oil business into paperwork chaos.  Or the Department of Health and Human Services mandates that some Catholic hospitals have to begin dispensing contraceptives or abortion pills.  Or the National Labor Relations Board decides to sue if a company moves its manufacturing plant to a location the NLRB doesn't like.

At that point, any Republican office-holder who gets elected, hoping to be there and vote against stuff like this when it happens will have already lost.  There won't be any vote.  Federal bureaucrats, like people secure in their bunkers, need not worry about any vote on what they are doing.

Enter the Texas Tea Party's favorite GOP Senate candidate, Ted Cruz.  "These bureaucracies," Cruz recently e-mailed me, "must be reined in.  Instead of allowing the people to participate in the democratic process, the bureaucrats create the rule and then declare that it will benefit society, sidestepping the constitutional legislative process.  That's why we must re-establish the proper role of the federal government.  To do that, we need new leadership in the U.S. Senate."

Pass the popcorn -- it will probably be a good show when Ted Cruz gets onto those Senate oversight committees, shaking things up.  He probably can't wait for the oversight of these bureaucracies.

Ted Cruz has a history of shaking things up in a big way.  As the author of 70 Supreme Court briefs as Texas solicitor general, Cruz was instrumental in several U.S. Supreme Court decisions, including District of Columbia vs. Heller, which held that the 2nd Amendment defines an individual right to gun ownership, as opposed to a "collective right" for a state-run militia.  That was a huge win for gun owners.

Also, in Medellin vs. Texas, Cruz led the defense of Texas against not only the Bush administration, but also the World Court, the United Nations, and 90 other nations when they attempted to pressure Texas against executing a rapist/murderer who was tried and convicted in Texas.

Recently Cruz has been stirring things up on the Justice Department's "Fast and Furious" scandal, calling for impeachment and possible prosecution of Attorney General Eric Holder.  Not exactly your average go-along-to-get-along politician.  In fact, it sounds pretty obnoxious. 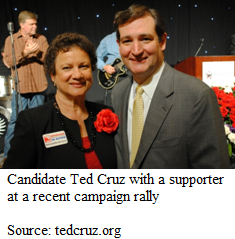 But I say that as a compliment.  See, we conservatives need all the obnoxious representatives we can get.  How many times does a candidate promise to get tough, only to succumb to the usual big-money Washington politics?  Someone always seems to be scratching someone else's back -- contributions are made, and the stupid people who follow the rules, we citizens, get stuck with the bill.  That is what brought about the Tea Party movement in the first place.  Early in the big-spending days of the Obama presidency, watching bailouts, rescues, and giveaways from "Obama's stash," our limit was reached.  Enough is enough.  Time for a correction.

My personal favorite Ted Cruz campaign issue is his approach to ObamaCare, which has become a mantra of his campaign: "I will work to repeal every word and every syllable of ObamaCare."  Sounds kind of like a Matthew 24, not-one-stone-left-upon-another approach, which is exactly what will be needed for the ObamaCare monstrosity.

Cruz's main opponent in the Republican nomination battle will be current lieutenant governor and establishment GOP favorite David Dewhurst, who also pledges to repeal ObamaCare.  But in a recent filing with the Federal Elections Commission, Dewhurst was shown to have accepted donations from Pfizer, Humana, Harden Healthcare, the American Hospital Association, and AstraZeneca, so he probably cannot be taken seriously on that issue. 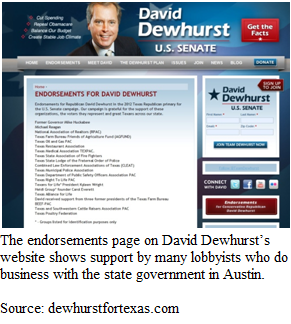 And although Dewhurst was recently endorsed by Texas Governor Rick Perry, Dewhurst's website lists endorsements of many lobbyists and political action committees that have had dealings with the Texas government, which also doesn't look good.  Not exactly a stranger to the type of political back-scratching that happens with lobbyists.

One recent controversy in the campaign was whether in 2005 Dewhurst proposed a "wage tax," as opposed to an income tax, which is outlawed by the Texas constitution.  Allegedly such a tax would have raised a small amount of money for Texas schools.

Cruz said that Dewhurst did in fact make such a proposal, and Dewhurst denied it.  As evidence, the Cruz website presented a Wall Street Journal editorial published at the time, and an interviewer who heard Lt. Gov. Dewhurst actually make the proposal back then.  To be fair to Dewhurst, he isn't proposing any tax hikes in Washington now.  No sane Republican candidate in Texas would.  (Oh, be still my beating Californian heart -- these Texas guys are arguing over who might fudge a zero state income tax while the knuckleheads in Sacramento are battling over whether to raise California's top rate to 11% or to 13%.)

But every argument like this means a lot to Texas conservatives in this heated Senate nomination race.  FEC filings show an uphill battle for Cruz, but things can change.  While Dewhurst has raised more than twice what Cruz has raised, almost $12 million to about $5 million, the current cash on hand figure, about $3 million, is about the same for both candidates.  And a recent poll shows Ted Cruz inching closer to David Dewhurst for the May 29 Texas primary.  With national conservative supporters, including not only Tea Party Senators Pat Toomey, Mike Lee, Jim DeMint, and Rand Paul, but also

endorsements from the Club for Growth, FreedomWorks, and the Eagle Forum, things are looking up for what could be the Senate's next conservative senator and Tea Party bunker-buster.

Tom Thurlow is an attorney who practices law in the San Francisco Bay Area and manages the blog napawhinecountry.com.  He lives in Napa County with his wife Martina and daughter Rachel.  FULL DISCLOSURE: Thurlow has endorsed and contributed to the Ted Cruz campaign.