Warning: mysqli_free_result() expects parameter 1 to be mysqli_result, bool given in /var/www/html/americanthinker/admin/common/functions/func.general.php on line 126
 'A Struggle Ensued': Lynch Mob Justice In Florida - American Thinker
|

From time to time the U.S. is engaged in its popular, charming pastime, following criminal cases. Once the special hobby of retirees who flooded the courthouses, since cable TV and the Internet, anyone can participate in these modern versions of morality plays.  The latest episode is the Trayvon Martin/George Zimmerman one, a story that shows how a media rife with malpractice and incompetence, a black grievance industry supported by a corrupt Attorney General , and a special prosecutor in a difficult re-election fight can twist facts and put to jeopardy a man already cleared of wrongdoing despite the lack of persuasive, dispositive new evidence sufficient to meet the  state's burden of overcoming a claim of self-defense.

American Thinker has already published a short course on how media malpractice turned an ordinary, everyday incident into a nationwide racial dispute.

More detailed day by day breakdowns of the media's manipulation of the facts in the case, were made by Tom Maguire on Just One Minute. Here are some of the running accounts:

NBC and MSNBC were the worst offenders, but no major news outlet was spared the ignominy of sloppy reporting, sometimes followed by subtle, unannounced corrections of the record, and often simply perpetuating the false accounts  when the facts they reported were proven untrue.

Here's a typical analysis by Tom  based on a video NBC and MSNBC played of George Zimmerman's appearance at the Sanford, Florida police department soon after the shooting:

If NBC's non-investigation of five appearances of the bogus Zimmerman 911 edit isn't enough, let's poke at this mystery - what "enhanced" police video did MSNBC air last month, what did it really show, and where is it now?

Bob Somerby of the Daily Howler called this out on April 4 but we can illustrate it with a screenshots.  Over to Bob:

Last Thursday afternoon, MSNBC played videotape of Zimmerman's apparent injuries which was much more "enhanced," much more clear. See THE DAILY HOWLER, 3/30/12.  Martin Bashir referred to this tape as "an extended and newly released surveillance video" which showed "new angles, never seen before, of George Zimmerman being brought into the Sanford police station." This suggested that MSNBC had received a second tape from the Sanford police video system-that this was not the same old tape others had aired before.  Bashir's tape did provide a much clearer look at the back of Zimmerman's head. It seemed to show a rather large goose-egg style bump on the back of his head, with a rather clear abrasion atop it. 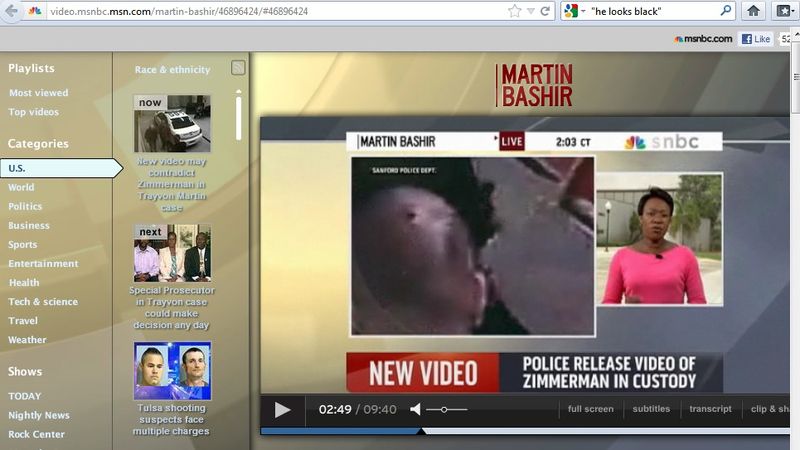 This tape is much more "enhanced" than the ABC tape. And it has now disappeared.

He linked to a March 30 post which included this:

What videos does NBC have in its archives, and which are authentic?  Inquiring minds want to know.

Most strikingly, this new video showed close-ups of the back of Zimmerman's head-footage which hadn't been shown Wednesday night. Rather clearly, these close-ups seemed to show a fairly substantial goose-egg style lump on the back of Zimmerman's head, with a fairly clear abrasion at its crown, You too can watch this "extended and newly released surveillance video," with its "new angles, never seen before." To do so, just click here. The new close-ups are shown four times, starting at 2:45.   As you watch these close-up shots, you will hear [Martin] Bashir and his guest, Joy-Ann Reid, as they keep stating the party line: There is no sign of injury to Zimmerman on these tapes! In fairness to Reid, and this is important: Reid wasn't present in the studio. We would assume that she wasn't able to see this new videotape.   Why did Bashir say the things he did? Go ahead! You explain!

I have followed the links, listened to the Kafka-esque dialogue, and saved the screen shot above which appeared during the 'no apparent injury' discussion.

Where is the video now?  Was it authentic and buried?  Was it fake, and if so, why run it? Or, why ask why?

By way of comparison, Al Sharpton of MSNBC recently presented without comment a different video. Back to Bob:

As usual, Sharpton, Coffey and Padowitz were echoing each others' views. To watch the full segment, click here.   For us, a rather shocking moment occurs around 11:45 on this tape.  At that point, without comment from Sharpton, new videotape of Zimmerman appears. It offers a very large close-up of the back of his head as he arrives at the Sanford police station on the night of the killing.  This close-up isn't grainy. And wow! In this close-up image, the back of Zimmerman's head seems to be completely pristine. There isn't the slightest sign of any blemish or injury.  There isn't a stub of a hair out of place. There is no sign of any injury. To judge from this new close-up view, Zimmerman didn't suffer the slightest wound or abrasion on the night of the killing-just exactly as we libs have been told. (See the second comment to Drum, above.)

Mr. Sharpton doesn't say "no sign of injury", nor does he explain whether the video is enhanced or not; ABC News exhausted that topic.

An accurate review of the public evidence of the case, in sum, is far different than the media portrayal.

B.  Hoodies to Bounty Offers to the Appointment of a Special Prosecutor.

It doesn't take a great deal of insight to see how the killing of Trayvon Martin, whom the media almost uniformly inaccurately presented as a younger, much smaller child( sans his tattoos and gold  teeth grill) than he was when killed and smaller than George Zimmerman, was the vehicle for another stab at a national race war. Sometime earlier Zimmerman had taken actions to protest that very Police Department's failure to act when the son of a Sanford police officer had beaten a homeless black man. Others stepped forward to credibly establish he had no racial animus towards blacks whatsoever.

To keep fanning the flames, the media invented a new ethnic/racial category "white Hispanic".  (A Hispanic-Black fight and murder apparently was unacceptable to the story line they wanted.) Despite CNN's effort to claim to the contrary and the outrageous doctoring of the transcripts of the 9ll call transcripts to support such claims, nothing in Zimmerman's 911 calls preceding the incident indicated he was stalking Martin with an intent to harm him, nor that his suspicions were aroused by anything except Trayvon's own behavior on that night at the Twin Lakes housing complex, where there had been 18 crimes in the prior year and where Zimmerman served as a volunteer Community Watch captain.

After the State Attorney Norm Wolfinger refused to issue a warrant for Zimmerman's arrest, believing the police had turned up insufficient evidence to disprove his claim of self-defense and warrant a criminal charge, it is clear that the Martins' lawyer, Benjamin Crump contacted the media, NBC  consultant and race baiter Al Sharpton and Jesse Jackson, Jr, with his version of the events , a version which to this day is so prevalent despite being inconsistent with the evidence it is hard to imagine how -- should the case go to trial -- an impartial jury can be found. The New Black Panther Party offered a bounty on Zimmerman, he and his family had to go into hiding, he lost his job and was expelled from community college for safety reasons. The President blew on the embers saying, " If I had a son, he'd look like Trayvon."

Thousands of people went on the march often with hoodies expressing support for Trayvon   (who had worn one on that fateful evening) and demanding Zimmerman's arrest and trial. The Attorney General did not seek to punish the NBPP for their illegal bounty offer. Instead he announced an investigation to see if <b>Zimmerman </b>had violated some civil rights law. Doubtless fearing an eruption of violence throughout the state, engendered by the inflammatory and false accounts of the events, the  governor appointed a special prosecutor, Angela Corey, a prosecutor in a tough re-election fight because of her decision in another matter to try a 12 year old murderer as an adult

This week, in what seemed a re-election campaign speech, State Attorney Angela Corey announced she was charging Zimmerman with Second Degree Murder. In her press conference she inexplicably revealed her close relationship to the Martins.  The only thing missing was Oprah and Dr. Phil.  The affidavit she has filed in support of this claim reveals she has no new evidence of a dispositive, persuasive nature to justify overruling Wolfinger's action.  No reference is made at all in the document to indicate she considered the self -defense claim or evidence, the beating of Zimmerman that preceded the shooting is concealed in the artful, if dishonest, language : "a struggle ensued."   Such a charge means she must prove he acted with a "depraved mind," something there is no public evidence of whatsoever.

Contra CNN's distorted reading of the 911 tapes, in the affidavit of probable cause state investigators swear under oath that Zimmerman did not make racist remarks. Nothing else in the document indicates any racial motivation.

The affidavit is so thin that commentators  both left (Professor Alan Dershowitz) and right (Mark Levin) have been critical of Corey and skeptical that the state can ever make its case, even assuming 12 jurors who are sentient and untainted by the media coverage can be found . Under Florida law, Zimmerman can raise the self-defense claim at a preliminary hearing scheduled April 20 and, should he lose there, he can re-raise it at trial.

To get a notion of how the self defense claim has been handled in other Florida cases, on January 5 of this year a teen who stabbed to death a classmate was not charged with a crime when the judge found that the murder victim had first struck him in the back of the head and continued to punch him . That sounds awfully like Zimmerman's assertion -- supported by physical evidence and witness testimony-- that  Martin punched him in the nose and banged his head against the sidewalk, doesn't it?

In sum, it appears to me an innocent man has been railroaded by the press and the race baiters, aided by an unethical, irresponsible special prosecutor and a racialist President and Attorney General.  I haven't seen a shred of credible evidence to the contrary. Nothing good can come of this.