Warning: mysqli_free_result() expects parameter 1 to be mysqli_result, bool given in /var/www/html/americanthinker/admin/common/functions/func.general.php on line 126
 Going Too Far in a Good Cause - American Thinker
|

Going Too Far in a Good Cause

"Causes," and those who support them, play a vital role in society, often helping society to redirect its focus away from hurtful attitudes or policies and toward more humane or politically sound positions.

However, sometimes even the best causes go too far and, in the process, actually damage support for the issues for which they advocate.  Unfortunately, too often truly good causes -- including important conservative causes -- are undermined by the very single-minded vigor of their advocates, especially when those advocates adopt bullying tactics to enforce public compliance with their insular position.

This has just happened in a country with a population no larger than that of San Francisco -- but thanks to the ubiquity of the internet and the global nature of major news outlet, the damage done has been to this cause worldwide.  As reported by the New Zealand Herald and the Today Show, this kind of self-righteous meltdown has just happened in New Zealand.  There, the country's La Leche League -- a group that advocates for breast-feeding -- lost sight of the fact that protecting infants from exposure to secondhand smoke is just as righteous a cause as their own.  They launched a vicious mass-e-mail campaign attacking the non-smoking ad; in doing so, they went too far, demonstrating the kind of pitfall that awaits any good cause when it gets caught up in self-righteousness.

Here are the facts: the New Zealand government recently featured popular rugby star Piri Weepu in an anti-smoking public service TV commercial that included a two-second clip of Weepu cuddling and bottle-feeding his six-month-old baby daughter -- a touching image that subtly highlights the dangers of secondhand smoke.  It also sends a subliminal message about the important role fathers should play in infants' lives.  Considering the prevalence of out-of-wedlock births, this is an important conservative, family-values message that should not be ignored. 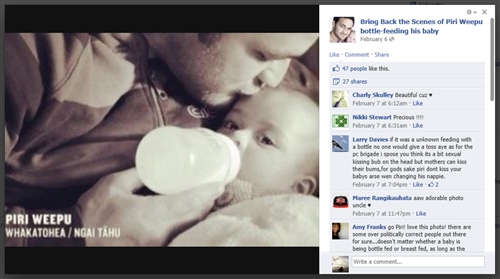 However, shocked at the "evil" of a father bottle-feeding his infant daughter, the La Leche League organized a strident e-mail campaign and -- claiming that that the image "didn't mesh with its core message: that breastfeeding is best for children" -- publicly forced the New Zealand's Health Sponsorship Council to back down and remove the "offensive" image.

Their message couldn't be any clearer: Our position is the only valid position.

From the La Leche League's shrill response, one might think that someone had spit on their flag or accused their mothers of prostitution.  By forcing public officials to purge an innocent message, just because it didn't embrace one group's position -- even on behalf of a totally unrelated cause -- this group came across as stiff-necked, bullying, strident, and out of touch, so self-centered that they can't see that there are other positive messages out there that don't involve them.  This unwelcome image now brands the La Leche League not just in New Zealand, but throughout the world.  This story has appeared on the Today Show, on MSNBC's website, and on more than 6,000 internet sites around the world, tarring La Leche Leagues worldwide with an extremist brush.

While it "won" the issue, New Zealand's La Leche League is now caught up in a publicity firestorm.  It's too soon to know just how much this has hurt the cause of breastfeeding -- not to mention the advocate groups' ability to raise money, in the U.S. and around the world, as well as in New Zealand.

This is sadly typical of the behavior of one-issue people -- not only do too many of them think their issue is right and important (and it often is), but they also believe that others aren't allowed to challenge that view -- even in cases like this, where others aren't really challenging that view.

While conservatives are not immune to this tendency toward blinkered self-righteousness, 40 years' experience in the advocacy field has shown me that this attitude is more often found among liberal cause groups.  This New Zealand incident in many ways parallels what Planned Parenthood did to the Komen organization a few weeks ago.  In both cases, when the "cause group" felt it had been crossed, it unleashed a massive e-mail campaign which intimidated people who had no desire to become wrapped up in a political controversy, and who therefore caved to the orchestrated pressure.  In both cases, these groups "won" without realizing how the public perceives these bullying, self-centered tactics.

The La Leche League issue is no longer about breastfeeding.  It's about a strident group that feels justified in imposing its narrowly focused values on others.  It's about stifling public discourse surrounding an issue having nothing to do with breastfeeding.  It's about the damage a group can do to itself -- and its cause -- when true believers don't look beyond their own passion and realize how foolish they look.  And it's about how badly a group can hurt themselves when they publicly act self-centered and entitled.

In the public arena, good-cause groups must be allowed to offer their own messages to the public without being bullied into silence or compliance by a self-righteous group, just because an image doesn't advance those bullies' own agenda.

Ned Barnett is CEO of Barnett Marketing Communications (www.barnettmarcom.com) in Las Vegas.  The author of nine books and an adjunct professor at two universities, Barnett has managed strategy and media for three presidential campaigns -- in South Carolina and Nevada -- and in 2010, he served as communications director of both the Clark County/Las Vegas and Nevada Republican Parties.  Since the mid-70s, he has managed issues advocacy campaigns for not-for-profit employers and clients and is a frequent speaker and author on subjects related to such causes.