Warning: mysqli_free_result() expects parameter 1 to be mysqli_result, bool given in /var/www/html/americanthinker/admin/common/functions/func.general.php on line 126
 Obama on Energy: An Exercise in Nuance - American Thinker
|

Obama on Energy: An Exercise in Nuance

Once upon a time, Al Gore invented the internet.  Now, it seems, Barack Obama is the one who invented hydraulic fracking.

To be specific, President Obama is channeling our old VP by taking credit for things he did not invent or create.  What's worse, though, is that Obama has let his claims affect his energy policies.

For example, Obama's "Green Energy" policies are based on the global warming hoax.  His decision to cancel the Keystone XL Pipeline project pleased environmentalists, but at the cost of 20,000 jobs.  And "global warming" is Obama's scare tactic.  During his State of the Union (SOTU) address on January 24, 2012, Obama applauded his administration for increases in oil and natural gas production in the U.S.  He also claimed that the federal government, under his watch, invented hydraulic fracturing and horizontal drilling.

To wit: at the 27:13 mark of the SOTU, Obama said, "And by the way, it was public research dollars, over the course of 30 years, that helped develop the technologies to extract all this natural gas out of shale rock -- reminding us that government support is critical in helping businesses get new energy ideas off the ground."  He actually said that!  (For the record, fracking was first used in 1947, before Obama was even born.)

The Institute for Energy Research (IER) data shows that oil and gas production increases occurred in spite of Obama's policies, not because of them.  The IER said, "The increase in production is occurring on private and state lands, the use of which is much harder for the President to restrict. Meanwhile, production on federal lands is decreasing significantly[.] ... [Obama's] administration did not hold a single offshore lease sale in fiscal year 2011."  The offshore leases were not sold when the Obama administration decided not to pursue a new 2010- 2015 Outer Continental Shelf (OCS) lease plan.

The Deepwater Horizon oil explosion/spill occurred on April 20, 2010.  After that, Obama suspended all new drilling in the Gulf of Mexico and then, after the ban was lifted, made it so difficult to get new permits that oil companies moved their drilling rigs to less politically intransigent regions of the world.

Exxon-Mobil, Conoco-Phillips, Chevron, and Shell announced in February 2011 that the development of a Marine Well Containment System (MWCS), capable of controlling oil spills like the Deepwater Horizon accident, had been completed.  Said the IER, "Since the Marine Well Containment System was crafted in conjunction with government regulators in order to meet strict specifications, there is no reason for the Obama Administration to continue preventing responsible energy companies from returning to the Gulf."

Let's see.  February 2011 is within FY2011, so upon what basis did the Obama administration decide not to hold a lease sale?

To further illustrate how Obama's rhetoric and reality do not track together, let's look at his claim and what actually occurred: 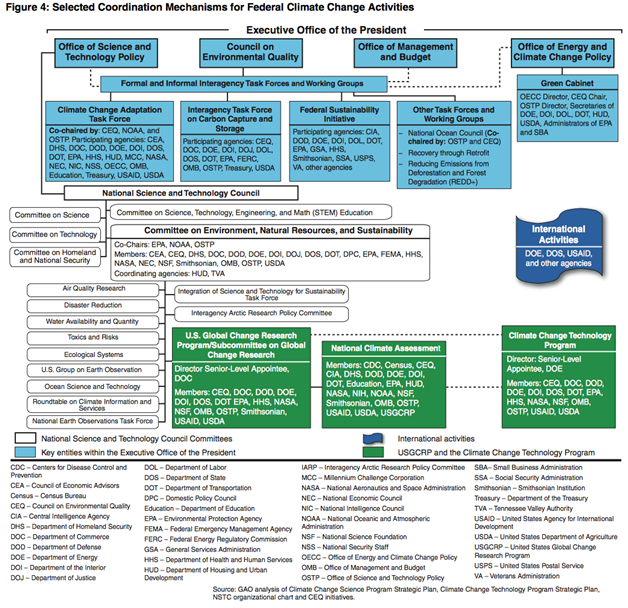 In January 2009 when Obama was inaugurated, the U.S. produced 5,154,000 barrels of oil per day.  In November 2010 (the last month for data), the U.S. produced 5,874,000 barrels per day -- an 8.8% increase.  The increase occurred entirely on private and state lands.  From the table above, it can be seen that oil production increased by 1% from 2009 until 2010.  And the same table shows a 9.7% increase in gas production.  It should be emphasized that both increases occurred on state and private land -- that is, land that Obama cannot easily control.  While it is technically correct that oil and gas production has increased during the Obama administration, the increase occurred in spite of his policies.

Obama said, during the SOTU (again, at the 27:13 mark), that "we relied less on foreign oil than in any of the past 16 years."  Again, technically true.  But he failed to mention that with high unemployment, the rising gasoline price, and a slow economy (all of which in 2008 he promised to correct), oil consumption is down.  Again he claimed credit for something that occurred with which he had nothing to do.

During the SOTU (at the 3:37 mark), Obama said, "[A]nd everyone plays by the same set of rules."  When it comes to his energy policies, Obama is lying; he is doing the exact opposite of what he claims to support.  Does anybody remember Solyndra?  And from the Department of Energy (DOE) itself, we learn that "[t]he Department of Energy's Loan Programs enable DOE to work with private companies and lenders to mitigate the financing risks associated with building out commercial-scale clean energy projects, thereby encouraging the broader and more rapid growth of the sector."  (Emphasis mine.)

Regarding subsidies, let's examine subsidies (via the tax code) in dollars per unit of energy for wind, coal, natural gas, and petroleum liquids (gasoline) for FY2010, well within the Obama administration.

Yes, you read correctly: coal, gas, and petroleum liquids receive only 1.14% of the subsidy that wind energy receives.  Further, the "subsidies" are actually tax breaks available to anyone, not subsidies in the form of money and/or loan guarantees given to wind energy producers that just happen to be Obama cronies.  So much for "and everyone plays by the same set of rules."

So it appears that we need to, as with Clinton, examine everything Obama says, ascertaining why what he says is technically true in order to discover when he is not out-and-out lying.  We need to look for, as Paul Harvey used to say, "the rest of the story."

Dr. Beatty earned a Ph.D. in quantitative management and statistics from Florida State University.  He was a (very conservative) professor of quantitative management specializing in using statistics to assist/support decision-making.  He has been a consultant to many small businesses and is now retired.  Dr. Beatty is a veteran who served in the U.S. Army for 22 years.