Newt Gingrich is a failure.  A flawed, failed, weak human being.  But then again, isn't everyone?  When we are finally called to meet our Maker, there isn't one human being who has ever lived who can lay claim to perfection.  Well, there is One.

But that's not Newt.  He's true-blue human frailty to the core.  And everyone knows it.  Newt's "baggage" has been dissected, discussed, debated, and droned about on network news and cable shows since before he announced his candidacy.  His supporters respond with glowing praise of his agile intellect, debating performance, innovative ideas, and knowledge of the Washington power structure.

But for some Republicans and conservatives, Newt is definitely not their guy.  They could never vote for him, no matter how smart he is.  No matter if he could defeat Obama in a landslide or put America back on the track to prosperity.  Not even if he could tame the tax code, modernize and shrink the federal government and bring American sensibilities back to the White House.  It's a "no go."  Newt just has too much baggage.  Two affairs.  Two failed marriages.  Boom.  He's out.

But, according to Newt, he's changed.  He's older.  Wiser.  A grandfather now.  And he's answered every question about his past with grace and dignity while openly acknowledging his failures.  He's found a relationship with God.  And has sought God's forgiveness. 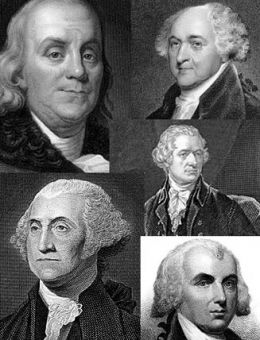 than perfect.  Washington, Jefferson, and Madison held slaves.  Adams was highly abrasive and had an explosive temper.  Benjamin Franklin fathered an illegitimate son and was quite the ladies' man as America's first ambassador to France.  More modern leaders have fared no better.  John F. Kennedy, Richard Nixon, and Bill Clinton were all deeply flawed human beings.

So, at what point does a candidate or president's personal, human frailties cross the line and disqualify him or her to run for the highest office in the land?  What level of moral perfection should we demand from our presidents?  How far back into their lives should we dig?  And is there any room for those who seek the presidency to ever be forgiven for their mistakes?  Or will Americans continue to follow political hatchet-men and media manipulators who destroy the character of good men and women who seek public office?

These are questions that American voters need to seriously consider.  If a "perfect" and unblemished presidential candidate is ever found, you can be sure that he/she has been manufactured and groomed by media consultants and political operatives.  What you see definitely won't be what you get.

And is that what America really wants?  A candidate who has never faced adversity and lost?  American history is built on stories of those who have failed and then risen to overcome seemingly insurmountable odds.  The American Revolution itself hinged on just such a story.  Bruised and battered, shoeless and shivering, George Washington's army crossed the Delaware River on December 25, 1776 to attack and rout the surprised Hessian forces at Trenton, NJ.  This single act saved the American Revolution.  Adversity and failure were no strangers to Washington in 1776 and were essential ingredients in his development as a general and American political leader.

"Experience is the father of wisdom."  So goes the saying.  Some believe that wisdom comes with age.  Yet the world is full of young and old fools alike.  Experienced and inexperienced.  Wisdom is not easily discovered.  It must be earned.  Not through academic study, professional expertise, or time served on the planet.  But through hard truths taught by potent and profound mentors.  The humblers of prideful men.  Pain.  Loss and failure.

Newt Gingrich has had his share of pain and loss.  And failure.  In a way that most Americans will never experience.  His errors cost him two marriages.  He's paid the price in his personal life.  Many times over.  His personal failings have been widely publicized, editorialized, and embellished.  Most of us cannot imagine the level of pain and humiliation involved when one's personal and private failures are made public and laid bare for all to see.  Newt has lived it.  And, by all appearances, he's a better man today because of it.  Smarter.  More insightful.  And wiser.  Pretty good traits for a president to have.

As human beings we all share the same, inherent defect.  We are not perfect.  We all sin.  With that in mind and for those who may feel that Newt Gingrich is not qualified to be president, based solely on his personal failings, a word from a very wise man.  "He who is without sin among you, let him be the first to throw a stone..."

If God, against whom all sin is committed, can forgive Newt Gingrich, maybe America can and should, too.

Jay Clarke is a businessman, writer, and lifelong conservative from Southern California.  Write him at americanheirs@gmail.com, follow him on Twitter @AmericanHeirs, or visit his blog at americanheirs.wordpress.com.