Warning: mysqli_free_result() expects parameter 1 to be mysqli_result, bool given in /var/www/html/americanthinker/admin/common/functions/func.general.php on line 126
 Sierra Club at the Metropolitan Club - American Thinker
|

Sierra Club at the Metropolitan Club

My dirty secret is that I'm a member of the Sierra Club.  I joined at the $15 rate for retired senior citizens and received a bonus shoulder bag.  The Sierra Club idolizes nature and demonizes man.  It glorifies economic parasitism and practices junk science.  I joined because I am investigating the environmentalist movement, and I wanted to get their e-mails.

The Sierra Club has an $84-million budget and 1.4 million members.  Probably most of the members are more interested in singles hikes than in environmental extremism.  I attended a presentation

featuring Michael Brune, the club's recently appointed executive director.  The presentation was held at the exclusive Metropolitan Club on floors 66 and 67 of the Willis Tower in Chicago.  The Willis Tower is the tallest building in the United States (110 stories) and was formerly known as the Sears Tower.

It seems a bit odd that Michael Bloomberg, a Wall Street insider and an advocate of large-scale development, would be giving money to the Sierra Club.  The Sierra Club is a relentless opponent of practically everything, including large-scale development.  But Bloomberg is perpetually toying with the idea of running for president, and the $50 million may be political protection money as well as an attempt to buy the 1.4 million votes of the Sierra Club members.

The Sierra Club campaign against coal is motivated by a desire to reduce CO2 emissions to prevent global warming. But since global warming skepticism and global warming fatigue are widespread, the club has opted for a junk science approach to reach its goals.  The club tells people that their babies will die, or at least get asthma, if coal plants continue to operate.  Although the cause of asthma is not known, it is suspected that it is related to the high levels of cleanliness in advanced countries that denies children and their immune systems exposure to the dirt and filth found in primitive places.  This is known as the hygiene hypothesis.  The incidence of asthma is about 50 times higher in developed countries compared to rural Africa.  For all the Sierra Club knows, coal plants may prevent asthma.  Given the hygiene hypothesis, that seems plausible.

With junk science, it is easy to scare people.  There are many things that are bad for us that are present at low levels in the environment -- for example, mercury, lead, radiation,  or tobacco smoke.   The junk science approach to trace toxins is to claim that if a high level of the bad thing would cause X people to get sick, then a level 10,000 times smaller must cause 1/10,000 as many people to get sick.  Given 300 million people in the country, this math can give you thousands of people getting sick from low levels of mercury, lead, radiation, or secondhand tobacco smoke.  This approach is known as the linear no threshold hypothesis.

The Sierra Club and its ally, the Environmental Protection Agency, lean on the small emissions of mercury from burning coal to work up a calculation of deaths from coal.  They minimize the fact that much of the mercury falling on the U.S. comes from China, volcanoes, or even from burning dead bodies with mercury-based fillings in their teeth.  Mercury pollution becomes an excuse to get rid of coal.  Arguing the science behind such claims often degenerates into a paper chase about statistics and what studies are good or bad.  From the bureaucratic point of view, the linear no threshold hypothesis is wonderful because it means that problems are never solved and there is always a need for more bureaucratic activity.

The panelists at the presentation included Karen Weigert, a Democrat political operative and currently chief sustainability officer of the city of Chicago; Jason Zielke from the Clean Energy Trust; and the Sierra Club executive director, Michael Brune.  If you look at their biographies, these panelists are examples of people who have well-paid careers promoting global warming, green energy, and environmental regulation.  The basic source of the money for such activity is government programs and, to a lesser extent contributions to non-profit organizations such as the Sierra Club.  The green economic sector -- for example, windmills, solar energy, and electric cars -- is entirely dependent on government subsidies and mandates.  Green economic interests are a potent political force for the continuation of green subsidies.  Junk science and scare stories are a basic tool for the pursuit of green political goals.  Without the vast government subsidies and mandates, the green sector would shrink to almost nothing, and people like the panelists would have to get jobs in the productive sector of the economy.

The program of the Sierra Club is well-described in executive director Michael Brune's book: Coming Clean: Breaking America's Addiction to Oil and Coal.  The book is filled with speculative and factually wrong statements.  His theme is that we can replace fossil fuels with windmills and solar energy at reasonable cost and at the same time create an economic boom.  This is pure fantasy because green power (including associated expenses for backup power and transmission lines) often costs 5 to 10 times more than coal or nuclear power.  Further, the reduction in CO2 emissions from adopting green power would be of little consequence because China, where coal consumption is increasing at a breakneck pace, is the leading emitter of CO2.  After the presentation, I asked Brune what he thought should be done about the China CO2 issue.  His principal suggestion was that we should demonstrate that green energy works here, and then the Chinese will copy our example.  This laid-back approach is hardly consistent with the depiction of global warming as an urgent problem.

One of the most vexing problems for the Sierra Club is that windmills kill birds.  The birds have trouble getting out of the way of the blades, which may be traveling at 200 miles an hour.  The effect on the bird population is probably minor, but the publicity about birds killed by oil spills has raised the profile of things that kill birds.  The bird kill problem was raised several times at the Metropolitan Club.  It was quite amusing to watch the panelists squirm under the verbal assaults of the bird-lovers. 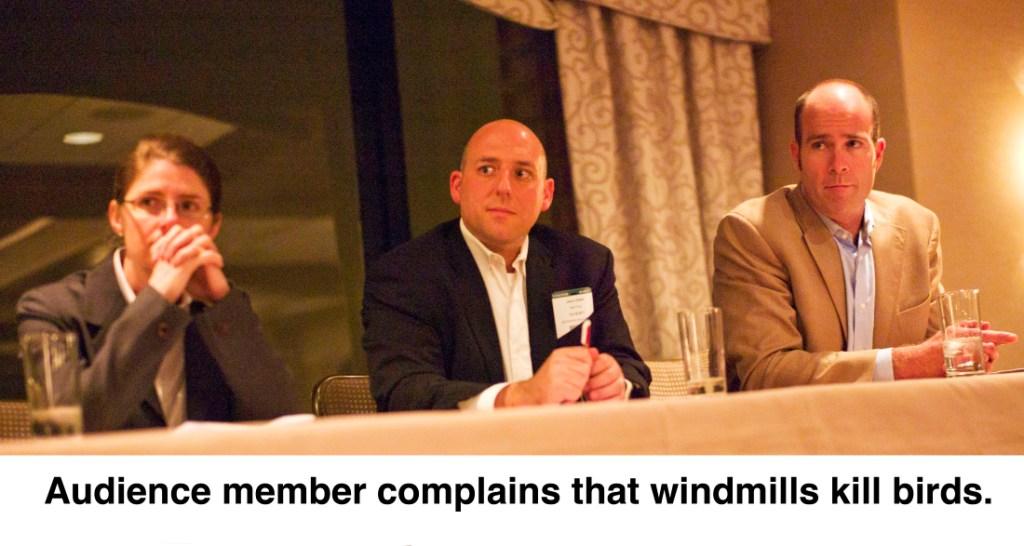 Green energy is a parasitic sector of the economy.  It exists through political influence and connections.  There are green jobs -- for example, the jobs of the panelists.  The burden of supporting green jobs falls on the rest of the economy because green energy requires large subsidies.  If the green energy promoters really believed their own story, they would far more concerned about CO2 emissions from China and far more willing to utilize CO2-free nuclear power.  It's more convenient to ignore the China problem because that is an intractable problem.  It's more convenient to ignore the benefits of nuclear power than to admit that environmentalists have been wrong about nuclear power for 50 years.

Panelist Karen Weigert was a producer for the global warming propaganda film Carbon Nation.  See this film if you enjoy being patronized by people who don't know what they are talking about.  The film suggests, unscientifically, that sea level will rise by 20 feet and create millions of climate refugees.  We are urged to support green industry lest China develop a larger parasitic sector than we have.

Countering the green energy movement will not be easy.  Not long ago, I attended a reception for a Republican freshman congressman who is anxious to get re-elected.  After I gave him a lengthy speech as to why wind energy is a waste of money, I found out that the gentleman silently standing next to us was a professional lobbyist from the wind energy association, and that gentleman was well-acquainted with the congressman.

Norman Rogers is a physicist and a senior policy advisor at the Heartland Institute.  He maintains a website, www.climateviews.com.