"Economic justice" and "income inequality" are rallying cries of today's liberal left.  They claim that income disparity is one of the greatest injustices in our country.  Equality, however, is meaningless when it comes at the cost of prosperity.

Group A has economic equality.  Group B has severe economic disparity.  Which group is better off?  Which is more prosperous?

A liberal friend responded to this hypothetical: "You forgot about how one person in group B cheated the other out $24,999,993." Without realizing it, he presented a perfect case study in the perception of wealth by liberals vs. conservatives.  At the risk of being simplistic, liberals believe that the rich become rich by exploiting others.  This exploitation creates an unfair inequality, and this inequality must be remedied.  Never mind that it's nearly impossible for someone to become wealthy without providing a desired good or service -- this isn't much of a concern for those who see inequality as a primary evil.  Capitalism, like socialism, involves the redistribution of wealth, but capitalism conducts this redistribution through personal choice, while socialism does it through government mandate and confiscation.

I've seen the rock band Skillet over 35 times and have bought almost every piece of music they've produced.  When I buy one of their albums, I'm exercising my free will -- trading a portion of my life's efforts (for which I've been compensated with money) in exchange for a portion of the efforts of many others -- songwriter John Cooper, the producer, the musicians, the marketing team, the people who developed and maintain iTunes, the people who manufacture the guitars, the microphones, the computer software, the ones who make the computers that run the software, the trucks that deliver the computers to the stores, the rubber used in the tires that go on the trucks...nearly an endless lineage of businesses, workers, and ancillary products, all coming together to make a piece of digital music available for me to purchase or pass on, based on my own preferences against the price offered.  This is the "freedom" in the free market.

At some point, the left concluded that this freedom was not a primary good, or at least, not as much a good as equality.  Sadly for them, freedom creates inequality -- and, at times, severe inequality.  When the left sees inequality as a primary problem, they seek to remedy it by moving away from freedom and toward government compulsion -- without worry that doing so will sharply curb the overwhelmingly positive effect capitalism has on the quality of life of every individual in the civil society.

The passing of Steve Jobs marks one of the most profound deaths of a world-changer in my lifetime.  Nearly every post I read on Facebook that day involved some comment about how his mind and products irreversibly changed the world.  Even the most liberal of my friends expressed a sense of loss upon his passing and yet, he was a virtual poster-boy for the free market.  Make no mistake: Steve Jobs was a billionaire who shipped jobs overseas, capitalized on tax loopholes, and probably traveled in a corporate jet.

Steve Jobs, however, gave millions of people products that forever altered the way they interact with music, telecommunications, and the internet.  This is to say nothing of the tens of thousands of people who earn a living working for Apple and the many companies that make parts and accessories for its products.  And yet, the left complains about individuals like Steve Jobs "paying their fair share."  Conservatives are right to call them out for such ridiculous comments.  Not only do the corporations pay taxes, but they pay incomes to their employees (which are taxed), which allows those employees to buy products and homes (which are taxed), not to mention the products they are directly involved in making (which are taxed).  Liberals speak as if cracking down on corporations will bring in a flood of tax revenue, without considering how this would effect employment at those corporations or the tax revenues associated with those employees.  Thomas Sowell has called this "Stage One thinking," and it is unfortunately common in America, particularly among the left.

If a company earns millions in profit because it develops a revolutionary medical device that saves thousands of lives, has it not paid its fair share?  If a company produces a chemical that kills 99.5% of bacteria in farms, has it paid its fair share?  If Ford creates a car so safe that it prevents 80% of otherwise fatal auto accidents, has Ford not done enough?  If a grocery chain brings us a bounty of diverse, healthy foods we can purchase without the cost and effort of growing them ourselves, do we think we're also entitled to the profits it brings that chain?

Tell me again -- who is being greedy?

Liberals have constructed entire campaign platforms around how much less America's poor have in comparison to America's wealthy.  This is apparently the great problem with capitalism -- but it's only a problem when economic equality is considered a primary good.  They pose the question, "how moral can capitalism be when one man has so much and another man has so little?"

When talking about economic philosophy, however, it is more helpful to compare America's poor to the poor in other countries -- particularly, those with economic systems that trend away from capitalism instead of toward it.  The "poor in America" is so comparatively wealthy to the developing world's poor that it requires scare quotes.

Recently a friend posted an anti-capitalist tirade on the internet.  He did it using an iPhone made by Apple, using wireless service by AT&T and a social network by Facebook.  He did this while drinking a coffee made by Starbucks, paid for with money he keeps in Bank of America, which he makes by working for Warner Brothers.  He wears shoes made by New Balance, drives a hybrid made by Toyota, fueled by gas that comes from Exxon, BP, Arco, or whoever has the cheapest price.  When he's feeling particularly green and anti-capitalist, he commutes to work with a bicycle made by Schwinn, after a breakfast prepared with organic ingredients purchased at Whole Foods.  He misses the point that without capitalism, none of these life-enhancing products would be available to him.

My friend's tirade inspired me to create a small Photoshop image pointing out the inherent hypocrisy in the Occupy protests.  I shared the finished image on my Facebook page and on Mark Levin's page.  Within 24 hours, the image had been shared some 20,000 times and was featured by the one politically sensible host of The View. 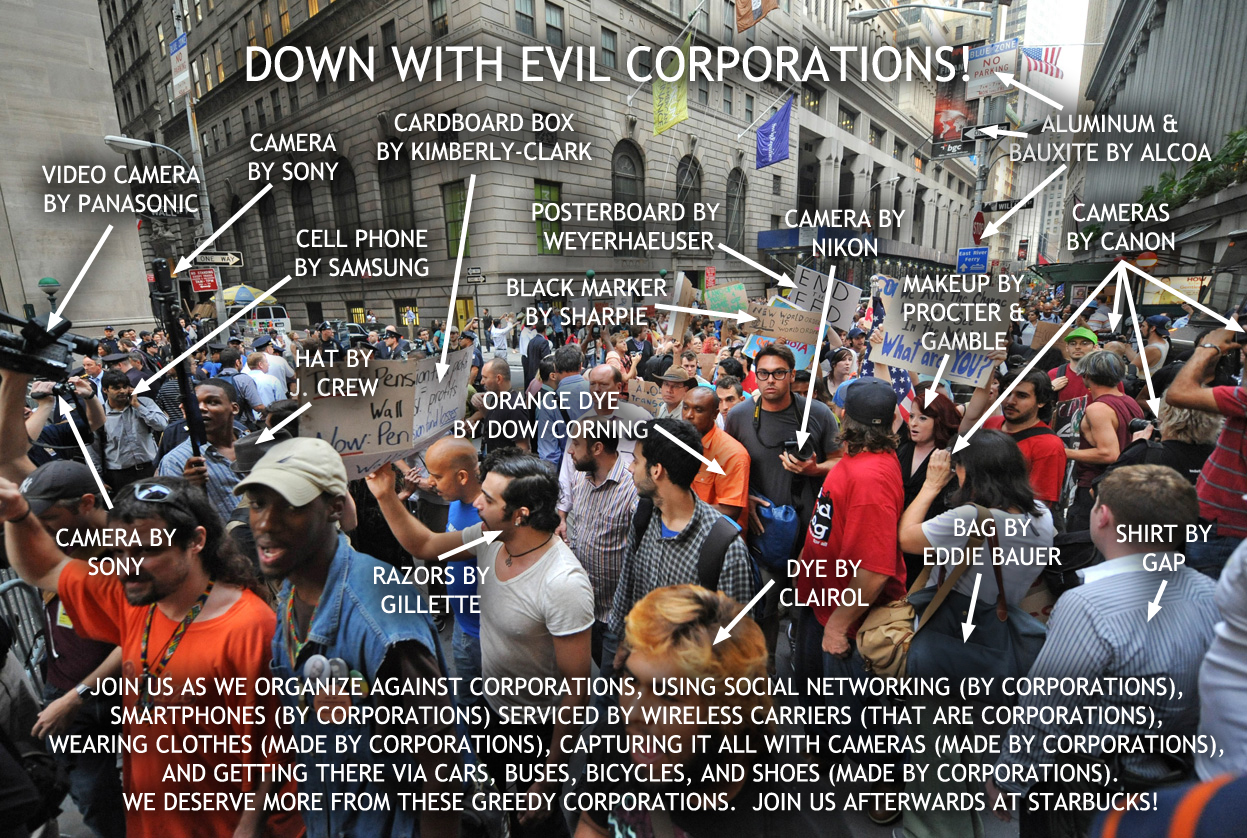 Perhaps there's some hope for America after all.

Chris Corrado is a 2nd assistant director in Los Angeles, California, whose credits include Atlas Shrugged and Indiana Jones and the Kingdom of the Crystal Skull.  He currently spends most of his time writing, in the event that his political beliefs cost him his job.