Warning: mysqli_free_result() expects parameter 1 to be mysqli_result, bool given in /var/www/html/americanthinker/admin/common/functions/func.general.php on line 126
 Slouching toward the 1930s - American Thinker
|

Slouching toward the 1930s

The current economic crisis rivals the one of the 1930s.  Despite shameless propaganda by government and its cronies in the media, people understand that the situation is getting worse.  Consumer confidence continues to decline as does confidence in the future.

We are headed for an event that history will record as worse than the Great Depression.  It is unavoidable.

The Level of Debt

The principal reason for the dire prediction is the level of debt outstanding.  Current debt levels are simply not sustainable.  Assets and cash flows cannot support or service this debt.

No economic recovery can occur without massive debt reduction.  As shown below, current debt is much higher than the 1930s: 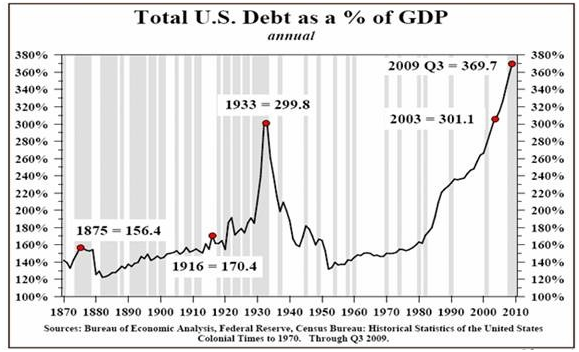 As a percentage of GDP, debt is at an all-time high.  Immediately prior to the Great Depression US debt was about 200% of GDP.  It rose briefly to 300% as a result of massive government interventions to combat the Depression.

At the beginning of the current downturn, debt was about 370% of GDP. It is about 400% currently.

To return to 150% requires a reduction of about $30 Trillion in debt. That represents about two full years worth of GDP!

After the 1930s politicians convinced themselves and the public of two things:

Both beliefs were false, but both aided politicians' insatiable drive for power and control. Once the public came to believe these myths, government owned the economy.  Any economic problem became a political one.  Economic slowdowns were no longer politically acceptable.

"Don't just stand there, do something" drove economic policy.  It was politically impossible to allow an economy to correct on its own.  Political action was required, even if such activity was ultimately harmful.  Politicians had to do something, anything! Their constituents demanded it.

The "government is responsible" attitude quickly spread.  Today, virtually any perceived problem or inequity is assumed to be fixable by government.  Government readily took on responsibility for virtually every aspect of our lives.

The madness is evident.  It is assumed that government creates jobs, educates kids, designs toilets and light bulbs. It is necessary to provide mortgages, retirement benefits and healthcare.  "Green energy" and other new technologies are assumed impossible without the assistance of government.

This litany of the presumed need for government could continue for pages.  Virtually all these presumptions are false. Worse, many in the public still believe that these "services" are "free."

Every swing in the business cycle, no matter how mild, became the responsibility of government.  Government was to step in and "fix" economic problems.  Seventy years of such "fixes" preceded our current problem.

Economic downturns are both normal and necessary.  Individual and business mistakes are remedied via economic slowdowns.   Misplaced capital and labor is freed up for more productive uses.  When this cleansing does not occur, an economy becomes less efficient and grows at a slower rate.  The mistakes remain in place and are perpetuated.

Government intervention is not corrective.  It is a cover up of prior mistakes.  The phrase "pretend and extend" describes what happens. Instead of allowing the economy to correct, government attempts to avoid the correction and the pain by covering up the mistakes.  That has been the history of much of the last 80 years.   Continued interventionism brought the economy to this crisis point.

The artificial boom that began decades ago is exhausted.  Response to the dot-com stock market bubble was the last coverup that "worked."  The system was flooded with credit and one bubble was replaced with another.   Now the housing bubble  has burst, marking the high point of "pretend and extend."

Credit expansion since 2008 has been impotent.  The real economy has stopped responding.  Economists who advocate more stimulus or credit are either ill-trained or have political motives.  Governmental stimulus and credit expansion created the problem.  Recommendations for more of the same qualify as insanity per Albert Einstein's definition.

The US is not unique.  Most of the developed world is burdened by excessive credit and government spending.  Easy credit enabled governments to grow too large and individuals to take on too much debt.  The point where markets are unwilling to provide more debt has arrived.

The position of the US, thought to be stronger than other countries, is not, as shown in this  chart: 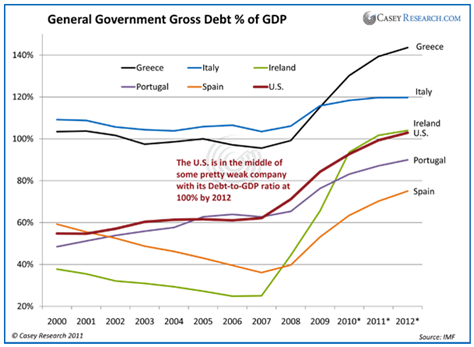 Rumors of another US credit downgrade circulate for good reason.

Governments everywhere are trying to prevent a massive economic and financial correction, but they will not succeed.  In order for economies to return to health, debt must be liquidated.  De-leveraging must occur.  Debt will be paid down and/or defaulted upon.  Normal economic growth cannot resume until excess debt is removed from the system.

The Problem With De-Leveraging

Reducing debt is known as de-leveraging.  The ramifications of de-leveraging are not widely understood.  Ray Dalio of Bridgewater Associates discussed the process on the Charlie Rose show (full transcript):

So then we begin the process in reverse as you can't spend as much you -- somebody else's income falls. And that process works in reverse.

And that goes on for a long time and that goes on for 50 or 75 years through history. We've had 50, 75-year cycles and then you reach a point where you can't anymore get more debt and the process starts to change. And you can't leverage up. Traditionally the private sector leverages up, we leveraged up then we got to a point in 2007 where we had a bubble and that same sort of bubble that happened in Japan, same sort of bubble that happened in the Great Depression, meaning we reached our debt limits. Europe's reached its debt limits.

The current credit bubble is bigger than the one that preceded and caused The Great Depression. Consumer and government balance sheets are worse than they were eighty years ago. Income is  incapable of supporting current debt levels.

Reducing debt to manageable levels will produce another Great Depression, likely greater and more painful than the original.  Debt reduction requires lower spending and higher savings. Large amounts of debt will not be paid and will be liquidated via defaults.

There is no other alternative cure for the economy other than de-leveraging.

Governments around the world will attempt to avoid de-leveraging  because of the associated pain of a Great Depression.  Unfortunately, that is not possible as Ludwig von Mises pointed out:

There is no means of avoiding the final collapse of a boom brought about by credit (debt) expansion. The alternative is only whether the crisis should come sooner as the result of a voluntary abandonment of further credit (debt) expansion, or later as a final and total catastrophe of the currency system involved.

Prior attempts to avoid corrections got us to this point. Now the supply of credit has been exhausted and taxpayers deeply indebted.  Another coverup is not possible.

The simple summary of what years of governmental intervention accomplished  is the impending economic and financial tragedy.  Politicians from the past may have gleaned benefits.  Our generation is left to pick up the pieces.

A printing press is available to most countries.  It is no solution to the underlying economic problems, but is the method that the political class will try once again.  Doing so will make the situation worse.  It steals purchasing power from the private sector.  In extremis, it will cause hyperinflation, effectively wiping out the value of savings and fixed contract obligations.

Credit creation cannot prevent de-leveraging. It merely defers it and impoverishes the citizens of a country prior to the onset of a Depression. Will the US government engage in such chicanery? Based on past history, the answer must be an unqualified Yes!  Jon Hilsenrath, sometimes referred to as the unofficial trial balloon holder for the Fed, has reported:

Federal Reserve officials are starting to build a case for a new program of buying mortgage-backed securities to boost the ailing economy, though they appear unlikely to move swiftly.

Steve Englander of Citibank describes how Europe will be set up as an excuse for more credit creation:

Policymakers in the US, UK and elsewhere are using the euro crisis as cover to ease policy. For example, the FRBNY's Dudley yesterday characterized even the improved US numbers as disappointing and pointed to further measures if growth did not improve. Chinese growth targets and policy maker comments imply that measures might be taken if there is any sign of slowing. The BoE has already expanded it QE program.

That a Great Depression lies in our near future is not at issue. Whether we are forced down the route of hyperinflation before the correction occurs is unknown.

Our best outcome is a Depression tomorrow. Better sooner than later. That is what politicians have provided. Hopefully they will not "do something" but "just stand there." The economy needs to be left alone. Their help is killing us. Hyperinflation will truly destroy.