Warning: mysqli_free_result() expects parameter 1 to be mysqli_result, bool given in /var/www/html/americanthinker/admin/common/functions/func.general.php on line 126
 Stop Calling the Tea Party Extreme. It Isn't. - American Thinker
|

The left-leaning mainstream media and liberal Democratic politicians continue to refer to the Tea Party as extreme, wacko, and out of touch with the American public.  Clear evidence indicates exactly the opposite.

Many of us are getting increasingly annoyed when we hear the Tea Party called extreme, right-wing wackos, or other unbecoming names along that vein.  Of course, almost everyone I know decidedly left of center deems him- or herself centrist.  My knee-jerk liberal neighbor thinks he's a centrist.  I have gone back through every posting on his blog, and they are all as far left on whatever subject he is writing about as one can be.

But then, he also thinks Obama is a centrist, as do large segments of the MSM, Hollywood, and other liberal groups.  Universal health care, unconditional amnesty for everyone, taxing enough life out of our valuable corporations to drive them to other countries (good riddance!  I mean, who wanted those high-paying jobs anyway?), subsidizing green energy schemes that cost a fortune and make no economic sense -- it goes on and on.  I guess that, given their viewpoint, it's no wonder they think the Tea Party is extreme.

Now, I know it's pointless to try to convince a liberal that reality isn't a whipped-cream world where all you have to do is wish and it will come true.  However, with the hope that some late arrivals to politics and those "independents" who seem to ride the fence and fall on whatever side has greener grass at the moment are open-minded and willing to listen, I will present some very obvious facts that have been dramatically confused by the various liberal cults that want to paint the Tea Party as extremist.

First, make no mistake about the MSM; they feign honesty, but their decidedly slanted viewpoint denies them the ability to present things in a straightforward manner.  There are some who argue that they purposefully distort the truth and paint those on the right side of the aisle as loonies, either directly or subtly.  I choose to believe that, being in the news business, they are merely hopeless liberals without a clue about reality, and believe they are representing the news fairly.  Regardless, they have the ability to affect opinions.  Depicting the Tea Party as extreme is an issue that really needs to be exposed.

So, exactly what does it mean to be extreme?  We all know, but I will present a definition anyway from Dictionary.com (with some minor editing):

1.  of a character or kind farthest removed from the ordinary or average.

2.  utmost or exceedingly great in degree.

3.  farthest from the center or middle; outermost; endmost.

4.  farthest, utmost, or very far in any direction.

5.  exceeding the bounds of moderation.

6.  going to the utmost or very great lengths in action, habit, opinion, etc.

So what exactly is extreme about the Tea Party?  Just how are they "of a character or kind farthest removed from the ordinary or average"?

Let's analyze their viewpoints.  The Tea Party is not an official organization, but from the TeaParty.net website, the main "planks" are:

A recent Rasmussen poll (from US News and World Report) indicated that considerably more respondents believe the federal government has too much power as opposed to too little.  According to the survey:

And from a January ABC News article:

On this issue, the Tea Party is decidedly centrist.

A December 2010 poll from Rasmussen Reports clearly shows how important individual freedoms are for Americans; "[a]mong moderate voters, a plurality (48%) agrees with the conservative perspective with a focus on protecting individual rights."  Interestingly, "[t]he widest gap as is often the case is between the Political Class and Mainstream voters.  Seventy percent (70%) of those in the Mainstream say the primary role of a government is to protect individual rights.  Fifty-one percent (51%) of Political Class voters say insuring fairness and social justice should come first."  Wow.  A whopping 70% of the Mainstream class!  Those are big numbers.

On this issue, the Tea Party is decidedly centrist.

While polls asking the direct question of how important personal responsibility is in general are hard to find, specific polls show Americans believe in the concept.  From a Gallup poll on the subject of personal responsibility in the matter of health care, "89% of Republicans, 64% of independents, and 61% of Americans overall say Americans themselves -- rather than the government -- have the primary responsibility for ensuring that they have health insurance."  Fairly large numbers support the Tea Party position.

Hardly anything that can be called extreme.

No surprise here.  According to a GlobalScan poll, the free-enterprise system and free-market economy together decidedly constitute the best system on which to base the future of the world.  In the U.S., this opinion is shared by 71% of the people surveyed in contrast to 24% who disagree.  (Worldwide polling shows 61% agreement as opposed to 28% who disagree.)  Concurrence again.

So, concerning all four "planks" of the Tea Party, the majority of the public is clearly in agreement.  However, as we know, the Tea Party is vocal in its support or opposition to other specific issues as well.  Regarding some of their more important issues: 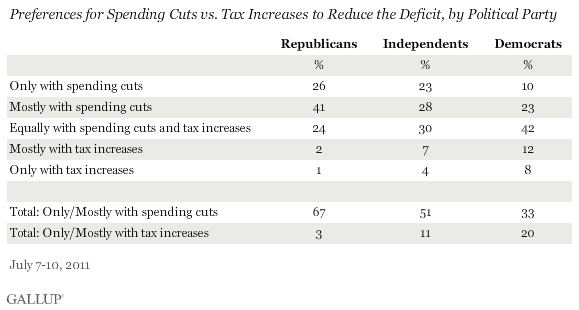 So how is it the Tea Party is labeled extremist when, on virtually all their important issues, the evidence is clear that most Americans are in substantial agreement with it?  And why did a Gallup survey conducted April 20-23 of this year find that only 30 percent of Americans describe themselves as Tea Party supporters?

Clearly, the American public has been mislead by the MSM and by the propensity of liberal politicians who customarily preach the left-wing viewpoint to hurl charges of racism or other unflattering words at anyone who does not agree with them.  Serious misunderstanding of the Tea Party and the American people is apparent in Nancy Pelosi's famous comment referring to the Tea Party movement as astroturf instead of grassroots.

The result of this misrepresentation is the marginalization of the Tea Party to segments of the American public who pay little attention to politics and believe what they hear on the 6:00 news at dinnertime.  It's time the "teabaggers" passionately disclaim the extremist label.  People who make that claim should be stopped in their tracks immediately, and the conversation should cease until that claim is contested.

No, the Tea Party is not extreme.  It is merely the "Silent Majority" no longer being silent.