Warning: mysqli_free_result() expects parameter 1 to be mysqli_result, bool given in /var/www/html/americanthinker/admin/common/functions/func.general.php on line 126
 A Response to Rabbi Shmuly Yanklowitz - American Thinker
|

A Response to Rabbi Shmuly Yanklowitz

Shmuly Yanklowitz, who wears the title of "Rabbi" and is a Hillel director at UCLA, has penned an essay in the Jewish Week against the anti-sharia movement.  He takes the time to mention me by name.  This is my response.

For example, the essay begins with two paragraphs of pure polemics using such descriptors as a "slight discomfort," which magically came over him while in a cab in Paris with a Muslim driver -- why?  Because "American religious fanatics had succeeded at convincing me to be afraid."  He goes on to tell us that "fear and hate" are a part of Jewish communal discourse as well.  So, the table is set.  Truth and peace on the one side versus hatred, fear, and religious bigotry on the other.

Then, in the third paragraph, we learn that we know of this ugly anti-sharia movement because the Orthodox Union and the Anti-Defamation League have told us about it.  But Yanklowitz does not tell how they know this.  Are the rabbis of the OU expert in sharia?  Do they understand its jurisprudential principles?  Do they understand its pedigree and the implications for jihad and national security?

Is Abe Foxman of the ADL such an expert?  Or, more tellingly, does Abe Foxman and the ADL have the character and integrity upon which to base such an argumentum ad verecundium reliably?  Was it not Abe Foxman's ADL that was successfully sued for over $10 million for defaming a Colorado couple accused of bigotry?  A judgment confirmed by every court that reviewed it, and a judgment ultimately but grudgingly paid by the ADL?  The largest defamation judgment in the history of the State of Colorado...paid by whom again? Yes, the Anti-Defamation League.

After my cameo appearance in the fourth paragraph as presumptively the paradigmatic Jewish religious bigot, Yanklowitz attempts a caveat by conceding a bit of concern over violence and extremism in the Muslim world.  But even here, another caveat: he assures us that this extremism is isolated, and moreover, he reminds us that we must not discriminate against sharia as the baby in the dirty bath water.  The problem in this caveat of a caveat is that Yanklowitz assures us that this concern over Islamic violence and intolerance is not really a threat.  But Yanklowitz's assurances are merely gestures in the air.  What are the facts?  The facts, not something you'll find in Yanklowitz's essay, are these: the World Public Opinion Survey in 2006 of Muslim attitudes in the Muslim world (where 98% of the global 1.2 billion Muslims live), found that between 50% to 70% (depending on the specific country) of Muslims surveyed desired a regional if not global caliphate and an al-Qaeda-like sharia. 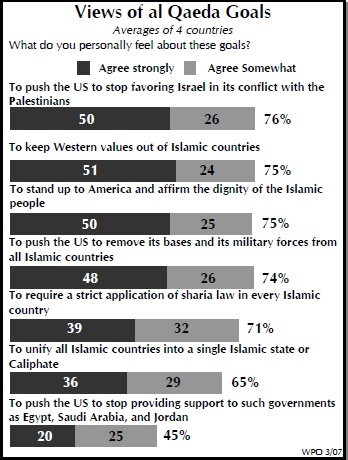 In 2010, Pew conducted its own survey of Muslim attitudes in the Muslim world, and lo and behold, we learn that Muslims in the main approve of al-Qaeda, Islamic political order, and death for apostasy.  Yanklowitz knows what apostasy is, surely -- it is what we call in the West "freedom of religion." 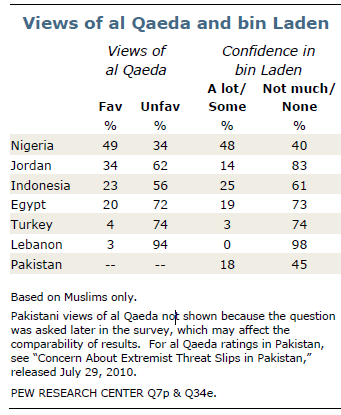 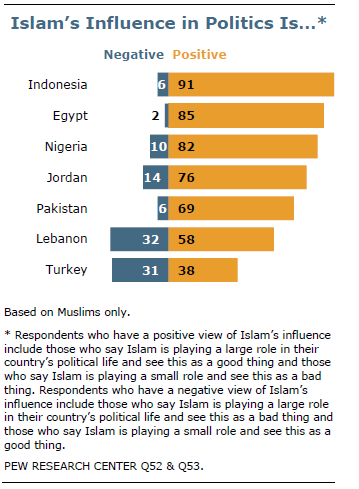 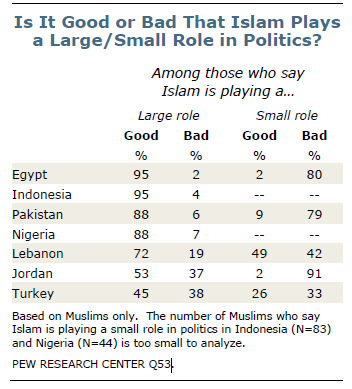 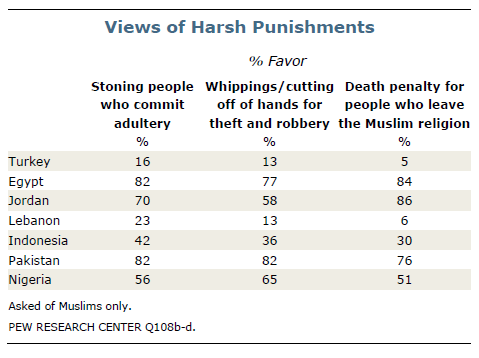 Having argued that we ought not discriminate against political evil of the sort promulgated by the majorities in these surveys, Yanklowitz then attempts to drag Maimonides (the Rambam), the greatest Jewish legal codifier and philosopher since Moses, into his polemical diatribe.  We're informed by this "Rabbi" (I'm curious where Yanklowitz earned his rabbinical ordination) that the Rambam not only ruled that Islam was free of idol worship (one of the gravest sins in Jewish law), but also that we might learn much from Muslim thought.

Let's assume this is Yanklowitz's first real effort at substance -- Jewish law and philosophy, subjects a rabbi ought to know something about.  Unfortunately, Yanklowitz seems to know little more than what he might have picked up with a quick Google search.  Indeed, the citation to Maimonides' work (more properly set out as Mishne Torah, Sefer Kedusha, Hilchot Ma'achalot Asurot, ch. 11, halacha 7) does in fact rule that Islam is not idol-worship.  So what?  Islam was not unique in this regard; Rambam mentions it because it is the dominant religion in his world.  In that particular legal reference, the consequence of Islam's monotheism simply means that a Jew may enjoy a benefit from a Muslim's wine but not drink it, which is the case for the wine of any non-Jew who doesn't worship idols.

Nowhere in this reference or anywhere in Rambam's legal works is there praise for Islam or Muslims.  Indeed, in the uncensored penultimate chapter of this great legal work, Rambam points out that while Christianity and Islam were prophesized by Daniel to be tests for the Jewish people, they both had the benefit of spreading the belief in one G-d ([Hebrew] Rambam L'Am, Sefer Shoftim, Hilchot Melachim, ch. 11, halacha 4, pp. 415-416).  But beyond the correctness of monotheism, what does Rambam say of Islam and its founder, Mohammed?

One of Rambam's most well-known public letters is his letter to the Jews of Yemen (available in Hebrew at Rambam L'Am, Igrot, "Igeret Teiman [or] Petach Tikvah," pp. 103-193), who were suffering during the "Golden Age," as it is so often called, of Islam.  Just as Rambam had been chased out of Andalusia (Spain) by marauding Muslim armies from the Maghreb, the Jews of Yemen were being persecuted by the Muslim mujahideen in the Arabian Peninsula.  In this famous letter, Rambam terms Mohammed the psychopath (Meshugah) and describes the ugliness and the viciousness of the Muslims toward Jews as the worst the Jews had experienced since the Exile.  Indeed, Rambam, who most certainly understood the theology of Islam, points out in this letter that Islam was theologically corrupt as well, having taken the Jewish Torah and effectively rewritten it for its own purposes.

Presumably, Yanklowitz did not mean to cite Rambam's legal work or his epistle of encouragement to the Jews of Yemen, written in Rambam's role as a Jewish leader.  Maybe, when Yanklowitz tells us that Rambam thought we might gain something from Islamic thought, he was referring to Rambam as Jewish philosopher and, notably, as author of Moreh Nevuchim, or Guide to the Perplexed.  But even here, Rambam has no good words for Islam or Islamic philosophy.  What Rambam does appreciate and pay respect to are a handful of Muslim neo-Aristotelians, notably Alfarabi (especially as noted in Rambam's letter to Ibn Tibbon [see, e.g., Moses Maimonides, The Guide of the Perplexed, trans. by Shlomo Pines, v. 1, "Translator's Introduction," pp. lxxviii-cxxxii).  But the Muslim neo-Aristotelians -- those who sought to apply Reason to Revelation -- lost out.  Islam thoroughly rejected such innovations and never adopted Reason.  Thus the end of the "Golden Age."  Al Ghazili, Ibn Taymiyyah, and their progeny -- the Muslim Brotherhood, the Wahhabis, and the Deobandis, among the Sunni -- were the theological, legal, and social victors, especially as we scan the contemporary surveys noted above.

So it is that Yanklowitz appears to know little of Rambam's writings or Islamic history.  But his essay moves on to the area of the contemporary legal effort to "ban Islamic law" -- an effort I am presumptively leading (but cf. American Thinker).  Unfortunately, no one of substance in the anti-sharia movement is trying to ban Islamic law.  Yanklowitz is simply wrong on the facts once again.  What the anti-sharia movement is doing -- at least those elements which have passed the American Laws for American Courts draft legislation I crafted (Tennessee, Louisiana, and Arizona) and which have promoted ALAC in dozens of other states, where it is in the legislative process for enactment -- is prohibiting state courts from applying any foreign law or judgment (sharia being only one of many possible offending foreign laws) which violates fundamental constitutional liberties like due process and equal protection.

What part of due process and equal protection does Yanklowitz not like?  If two Muslims want to apply sharia to work out their personal problems, so be it.  But if you go into court afterward and ask the state to use its authority to enforce that sharia ruling, you'd better be certain that the law as applied does not violate fundamental constitutional liberties.  Specifically, you'd better be certain that a Muslim woman is not being treated as chattel, which is often the case.  For example, sharia allows a man to divorce his wife with but a verbal expression not permitted to the wife.  Further, after a young age, children are awarded to the Muslim father, irrespective of the best interests of the child.  A women's testimony is worth but half of a man's.  This list goes on, but you get the picture.

Alas, Yanklowitz concludes his essay with a plea to embrace unconditional love and to abandon any vestige of hatred, presumably even hatred of the mujahid who seeks to murder the Jew and his family.  Indeed, Yanklowitz beheads his straw man with a jihadist-like stroke of polemical penmanship -- but should he find himself in the company of real jihadists, it won't be the straw man's skull separated from its perch.