A Ridley Scott Movie for Conservatives

For maybe a decade now, I've been conducting a one-man boycott of Hollywood.  Even so, I eventually see some new movies on cable, but I don't pay to see them in the theatre.  And now that I have my 1080p Vizio HDTV, not seeing flicks in the theatre isn't a big deal.  The reason I'm not supporting Hollywood (by buying first-run movie tickets) is that I'm put off by Hollywood celebrities who use their privileged station in society to espouse their wacky and un-American views.

My boycott isn't absolute, however, as I make exceptions for movies I want to support.  For instance, as a fan of novelist Cormac McCarthy, I saw No Country for Old Men in the theatre (and the Coen boys did a great job of adapting the book).  Despite such exceptions, I've probably been seeing less than one movie a year in the theatre over the last decade.

So my boycott has kept me until just recently from seeing the 2010 movie I'm recommending to conservatives: director Ridley Scott's Robin Hood.  Some may think that another treatment of Robin Hood wouldn't appeal to American conservatives.  After all, with his "take from the rich and give to the poor" ideology, Robin had an unwholesome tendency to redistributionism.  But sin 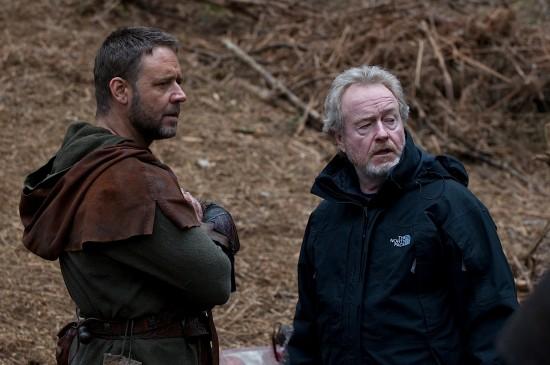 ce no one knows if Robin existed, Scott had license to put a twist on the story, and that he's done.

Instead of being some proto-socialist, Scott has transformed Robin into an original classical liberal, what we in America now call a "conservative."  The twist in the story is the origins of the Magna Carta (1215).  The Magna Carta was the genesis of English democracy; it codified what was the first limitation put on monarchic power anywhere.  For constitutionalists and those who believe in limited government, the Magna Carta is like the Pentateuch -- the first text, the original document.  So what the devil does Robin Longstride ("a common enough but noble Saxon name") have to do with the Magna Carta?  Well, you need to screen the movie.  But Scott distills the essence of the Great Charter in the scene in the hamlet of Barnsdale, where King John addresses a band of nobles and commoners who can no longer tolerate his abuses:

KING JOHN: The king does not bargain for the loyalty that every subject owes him. Without loyalty, there is no kingdom, there is nothing.

KING JOHN: Speak, if you must.

ROBIN LONGSTRIDE: If you're trying to build for the future, you must set your foundation strong. The laws of this land enslave people to its king, a king who demands loyalty but offers nothing in return. I have marched from France, to Palestine and back, and I know: in tyranny lies only failure. You build a country like you build a cathedral -- from the ground up. Empower every man and you will gain strength.

KING JOHN: Well, who could object to such reasonable words?

ROBIN LONGSTRIDE: If your majesty were to offer justice, justice in the form of a charter of Liberty, allowing every man to forage for his hearth, to be safe from conviction without cause or prison without charge, to work, eat, and live on the sweat of his own brow and be as merry as he can, that king would be great. Not only would he receive the loyalty of his people, but their love as well.

KING JOHN: So, what would you have, hmm, a castle for every man?

ROBIN LONGSTRIDE: Every Englishman's home is his castle. (Cheers.) What we would ask, your majesty, is Liberty -- Liberty by law.

If you are not moved by these words, then you need to hear Russell Crowe deliver them.  Another reason conservatives should like Robin Hood is because a central element in the story is taxation.  King John's taxes bled England, and brought the barons to rebellion.  "Loyalty means paying your share in the defense of the realm."  Sound familiar?

But a dramatic movie can't just be about ideas, however compelling those ideas may be.  A movie needs to connect emotionally.  It needs to have a story, characters, arresting visuals, and a fine musical score.  On all these counts, Robin Hood succeeds.  Scott had Brian Helgeland rewrite the screenplay and here's a quick gloss of the story:

The story begins in 1199 A.D.  King Richard I, back from the Crusades, is killed laying siege to Châlus Castle in France.  Robin, an archer for the king, goes back to England to inform Richard's mother, Eleanor of Aquitaine, of her son's demise and return his crown.  Eleanor immediately pronounces John king.  Robin then repairs to Nottingham to return the sword of a fallen knight to his father, Sir Walter Loxley.  In a delicious ruse, which I won't spoil for you, Robin is persuaded to remain with Sir Walter, and this is the sweet center of the flick.  The other part of the story concerns the traitorous marauder Godfrey, who plots with Philip of France to take over England, and this all comes to a head near the end with a battle on Dover Beach.

History sticklers may take exception to Robin Hood, but at least it makes a nod to history.  On that score, it reminds me a bit of Antoine Fuqua's 2004 King Arthur.  (One historical figure in the film is William Marshal, who also appears in Shakespeare's King John.)

Visually, Robin is stunning.  The candlelit scenes at Loxley Hall, with roaring fires in the hearth, are gorgeous.  The musical score by Marc Streitenfeld is terrific, and supports rather than dominates.  In addition to the conservative elements, the film has action, intrigue, suspense, and romance.  There's also a lot of humor, as when Marian retires for the night: She lets out a blood-curdling whistle, and then stomps off upstairs with all the hounds and setters following her in tow.

When Scott's film came to theatres in 2010, I didn't realize that it was much more than the usual "men in tights" stuff.  Ridley Scott's Robin Hood is one of those movies for which a conservative can break his boycott.  There's a Director's Cut out in Blu-ray, and HBO is showing it tonight at 11 PM Eastern Time.