Warning: mysqli_free_result() expects parameter 1 to be mysqli_result, bool given in /var/www/html/americanthinker/admin/common/functions/func.general.php on line 126
 Catch-22 on Poverty and Welfare - American Thinker
|

Catch-22 on Poverty and Welfare

Behold poverty's Catch-22: The left wails about poverty, demands ever more trillions of dollars in government spending to fight it, and then ignores that spending when counting the poor.

How did we get here?

To the average American, the word "poverty" implies significant material deprivation, an inability to provide a family with adequate nutritious food, reasonable shelter, and clothing.

Activists reinforce this view, declaring that being poor in the United States means being "unable to obtain the basic material necessities of life."

The mainstream media amplify the idea: Most news stories on poverty feature homeless families, people living in crumbling shacks, or lines of the downtrodden eating in soup kitchens.

But the actual living conditions of America's poor are far different from -- read: better than -- what these media images convey. 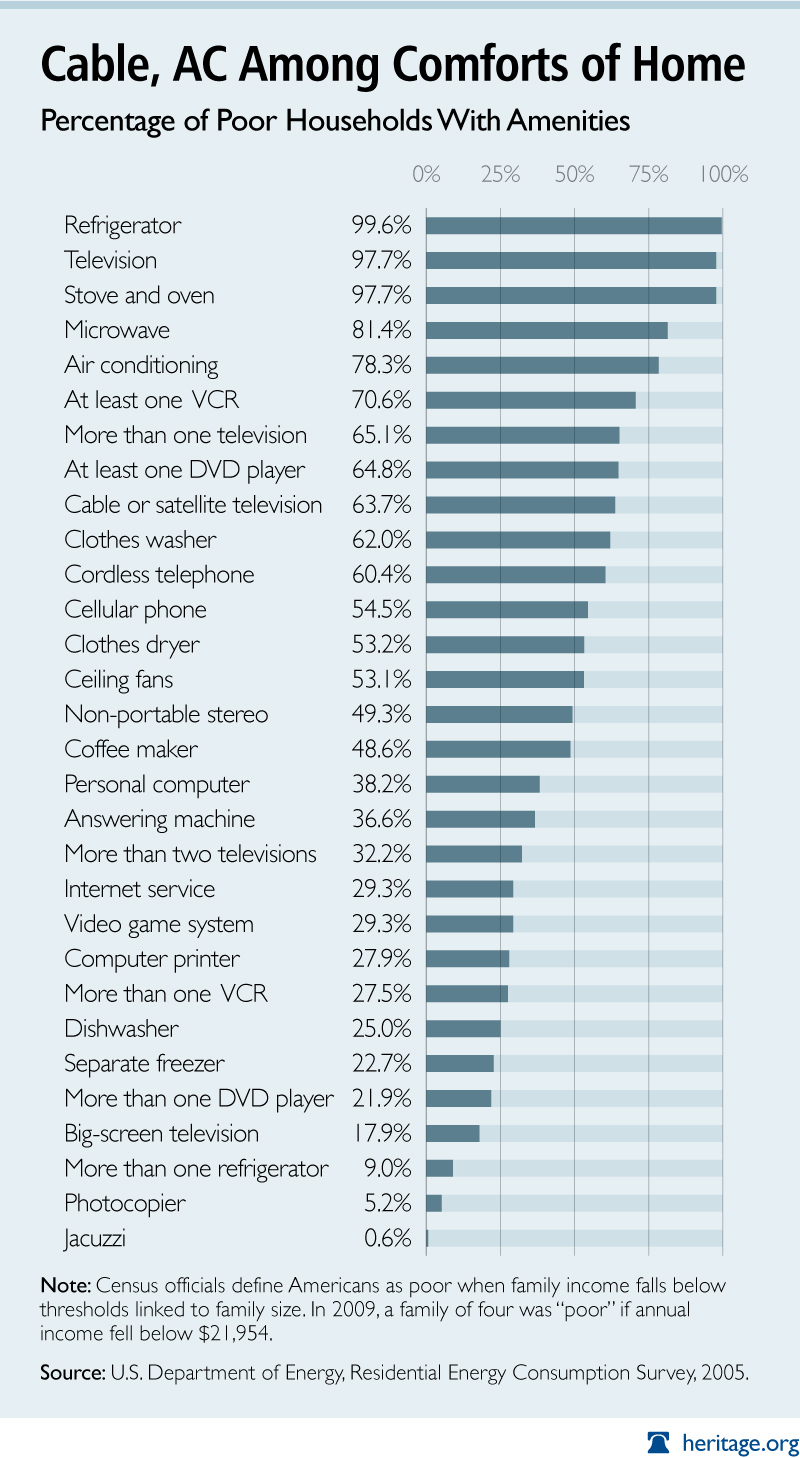 Which is a big relief, since nearly every year for the past two decades, the U.S. Census Bureau has reported that more than 35 million Americans were living in "poverty."  In recent years, the agency has concluded that one in seven Americans is poor.

What does it mean to be "poor" in America?  I write about it in a new paper from The Heritage Foundation: "Air Conditioning, Cable TV, and an Xbox: What is Poverty in the United States Today?"  According to the government's own non-census data, in 2005 the average household defined as poor by the Census Bureau lived in a house or apartment equipped with air conditioning and cable TV.

The family had a car (a third of the poor have two or more cars).  For entertainment, the household had two color televisions, a DVD player, and a VCR.  If there were children in the home, especially boys, the family had a video game system such as xBox or PlayStation.  Their kitchen had a microwave, refrigerator, and oven and stove.  Other conveniences included a clothes washer and dryer, ceiling fans, cordless phone, and coffee maker.

The home of the average poor family was in good repair and not overcrowded.  In fact, the typical poor American had more living space than the average European.  (That's average European, not poor European.)  The family was able to obtain medical care when needed.  When asked, most poor families stated they had sufficient funds during the past year to meet all essential needs.

By its own report, the family was not hungry.  Indeed, the average intake of protein, vitamins, and minerals by poor children is indistinguishable from children in the upper middle class, and, in most cases, is well above recommended norms. 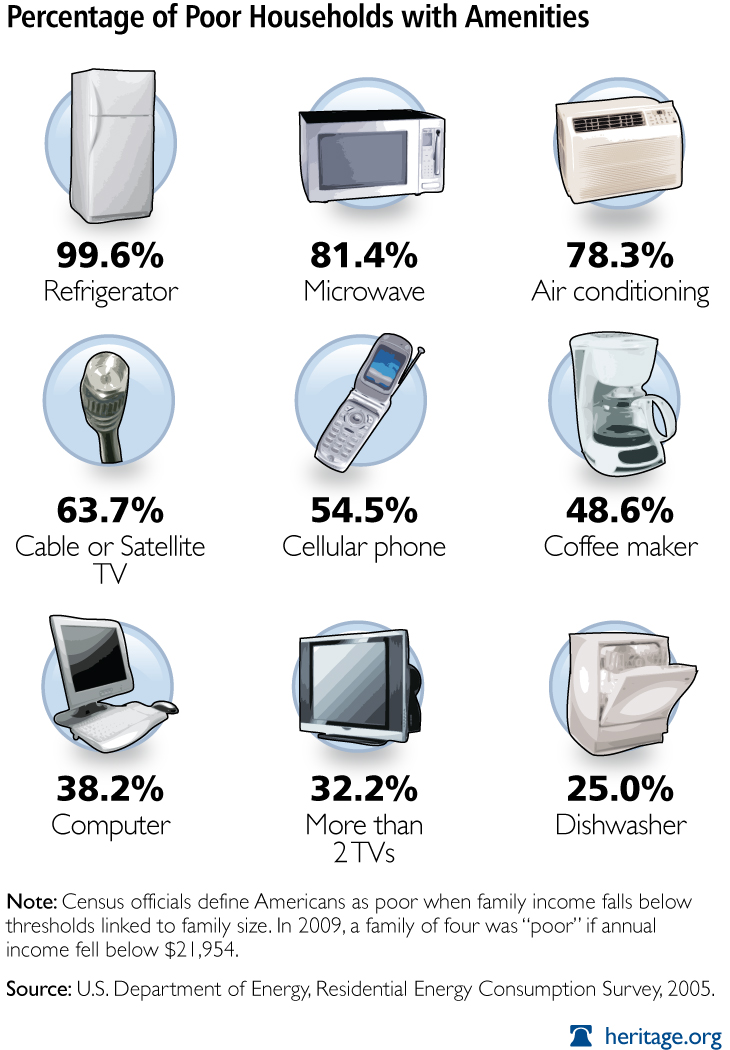 At age 19, young men defined as "poor" by the government are actually taller and heavier than were young men from the middle class in the late 1950s.  They're a full inch taller and 10 pounds heavier than U.S. soldiers who fought in World War II.

The major dietary problem facing poor Americans is eating too much, not too little; the majority of poor adults, like most of us, are overweight.

Needless to say, most Americans do not think persons living in such conditions are "poor."  So why does the Census Bureau insist that one in seven lives in poverty, even though most do not appear to be poor?

In part, it is a statistical gimmick.  Census asserts a family is "poor" if its reported "income" falls below specific thresholds.  The threshold for a family of four was $22,350 in 2011.

But when they count "income," census officials ignore most welfare programs such as: food stamps, public housing, energy assistance, and the earned income tax credit.

Last year, government spent $684 billion on means-tested aid programs providing cash, food, housing, and medical care to poor and low-income Americans.  But census officials count only about 6 percent of this as income for purposes of measuring poverty.

No surprise that the U.S. Bureau of Labor Statistics reports that low-income Americans spend at least $1.87 for every dollar of income that the Census Bureau says they have.

This, then, is the Catch-22: The left insists that the government spend more and more to fight poverty, only to ignore that spending when counting the poor.

The same Catch-22 shapes the class warfare debate.  The left shrieks about inequality -- the gap between the rich and poor.  In response, the rich are heavily taxed and hundreds of billions in resources are transferred to the poor.  But, amazingly, few of those transfers are counted when the government next measures inequality.

It's a rigged game the taxpayer can never win.

The government's statistical sleight of hand when measuring poverty and inequality is no accident.  The Census Bureau's poverty report was created at the beginning of President Lyndon Johnson's War on Poverty in 1964.  Bureaucrats designed the poverty report as an advertising tool for expanding the welfare state.

Measuring poverty is the welfare state version of Three Card Monte.  The taxpayers (known in the trade as rubes or marks) fork up hundreds of billions to help the poor through anti-poverty programs.  But when it is time to count the poor, the money magically disappears.

Since the beginning of the War on Poverty, the taxpayers have sunk more than $16 trillion into this bottomless pit.

Even worse, most of that government spending actively undermines LBJ's original goal.  Johnson (unlike the permanent bureaucracy) emphatically did not want to increase dependence and welfare enrollments.  Instead, he sought to make Americans prosperous and self-sufficient.

But most anti-poverty or welfare spending erodes work and marriage.  As result, after $16 trillion in spending, low-income Americans are less capable of self-support than when the War on Poverty began.

The government's answer?  You got it.  Spend more money.

Robert Rector is senior research fellow in domestic policy studies at The Heritage Foundation and co-author of the new report "Air Conditioning, Cable TV, and an Xbox: What is Poverty in the United States Today?"