Call Democrats Out for Racist and Anti-Semitic Connections

The Republican campaigns of 2006 and 2008 consisted of long litanies of dropping the ball when it comes to the Democrats' vulnerabilities.  I refer specifically to John McCain's and Rick Santorum's inexcusable failure to call their opponents out for indefensible racist, anti-Semitic, and/or anti-Catholic connections.  Casey's acceptance of MoveOn.org's support should have disqualified him, especially in a state with a large Catholic population.

In 2006, I joined Jan Poller and Robert Goldberg in exposing MoveOn.org's exercise of editorial control in favor of anti-Semitic, anti-Catholic, and other forms of hate speech at the organization's prized but now disgraced Action Forum.  A good summary of the arguments appears here.  MoveOn.org's Eli Pariser argued that the group did not know about the hate speech, which is interesting because the Action Forum's FAQ page said the moderators read each entry twice to get ideas for MoveOn's agenda.  He also said the organization removed the hate speech as soon as it was discovered, but I found and posted online literally dozens of such entries weeks later.

MoveOn.org had therefore been caught red-handed in easily disproven lies that should have resulted in its outright destruction as a viable organization.  Had Abraham Foxman (Anti-Defamation League) and the National Jewish Democratic Council not used their Jewish identities to whitewash MoveOn.org at all costs, the group would probably have ceased to exist in 2006.  As matters stand, MoveOn.org had to disable its prized Action Forum permanently to control the spreading damage, and it has far less influence today than it did in 2006.

MoveOn.org also published a photomanipulation of Pope Benedict waving a gavel in front of the U.S. Supreme Court, a picture that could have easily been modeled on the anti-Catholic cartoons of 19th century cartoonist Thomas Nast (also the creator of the Republican Elephant and Democratic Donkey).

Bob Casey refused to repudiate MoveOn.org's endorsement even though he was presented with ample proof that MoveOn knew about, tolerated, and even welcomed the hate speech.  Although I urged Santorum's team repeatedly to use this against Casey, it sat down in Unterkunft and, from where I sit, threw its man's Senate seat away.  Jim Gerlach on the other hand followed our advice to use Lois Murphy's acceptance of this group's endorsement against her, and he did so successfully.

Republicans must revisit MoveOn.org's sorry track record, to which it added a defamatory insult to General David Petraeus ("General Betray Us," a puerile phrase that could have come straight from Beavis and Butthead), during the 2012 elections noting that Barack Obama also accepted this group's support.  To this I can add Obama's open association with and promotion of the country's most vicious racists and anti-Semites.

Most people know that Barack Obama's pastor called on God to damn America.  It is also a matter of record that Jeremiah Wright published a blood libel of the United States by accusing it of developing the AIDS virus, i.e. using biological warfare to murder countless people around the world.  The Trinity United Church of Christ's official bulletin of June 10, 2007 added a blood libel of Israel and South Africa: "Both worked on an ethnic bomb that kills Blacks and Arabs."  I downloaded the TUCC's bulletins before the church "disappeared" them.  For example: 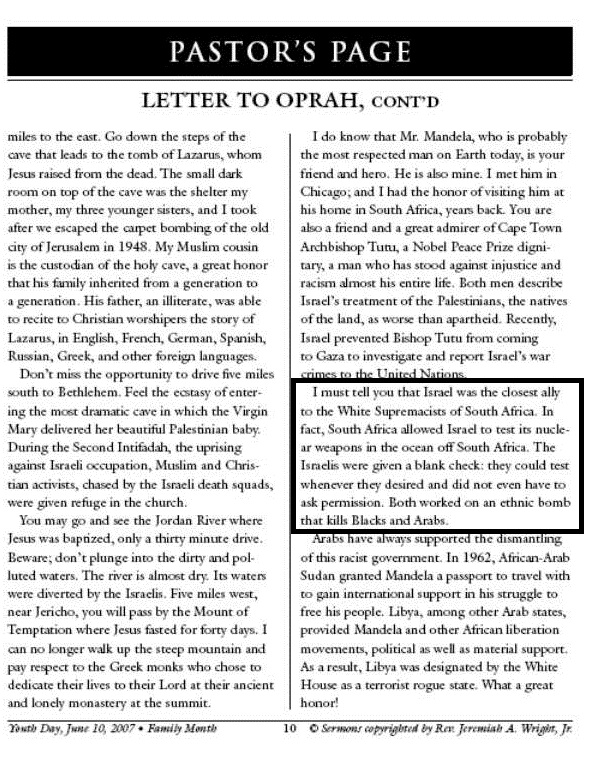 I also downloaded screen shots of Jeremiah Wright's and Michael Pfleger's testimonials on Barack Obama's official campaign site before the campaign threw them under the bus.  Pfleger exulted at TUCC with regard to Hillary Clinton's defeat in a primary, "There were a whole lot of white people crying!"  The people with whom the Obamas went to church for 20 years, and to whose influence they exposed their children, gave this specific statement a standing ovation that can still be seen on YouTube.

Aesop spoke correctly when he said birds of a feather flock together.  Guilt by association, as used by Joe McCarthy, involved suspicion of people for merely being in the same room with a Communist.  Barack Obama was not merely in the same room with vicious racists and anti-Semites, he has spoken at their organizations and posed arm in arm with them.

In 1995, the National Action Network, while acting under Sharpton's leadership and supervision, paraded around a Jewish-owned store while shouting racial and anti-Semitic epithets such as "Don't give the Jew a dime," "greedy Jew bastards," "make the cracker suffer," and "white interloper."  The latter was from Sharpton himself, and it obviously set the example for his followers.  A deranged individual then acted on this hate speech by setting Freddy's Fashion Mart on fire to kill seven employees.  A Google search on Sharpton's name and the Crown Heights riots also is instructive.

Barack Obama appeared at the National Action Network, and arm in arm with Mr. Sharpton, on no fewer than two occasions (2007 and 2011).  In the latter case, he lent the prestige of the office of the President of the United States to a professional hate monger and a proven (by its actions at Freddy's Fashion Mart) hate organization.

The National Jewish Democratic Council unwittingly supported this case against Obama when it condemned Mitt Romney for appearing at the museum of Henry Ford, a long-dead ex-anti-Semite (noting that Ford retracted and repudiated The International Jew).  What, then, are we to say of Barack Obama's open association with and promotion of a live and unrepentant one like Sharpton?  Our response to NJDC is that of King Henry V: "You must not dare for shame to talk of mercy / For your own reasons turn into your bosoms / As dogs upon their masters, worrying you."

Republicans need to say plenty about Sharpton, Wright, Pfleger, MoveOn.org, and the racist content of Obama's Dreams from My Father for which I can supply exact page numbers in contrast to the urban legends that diluted the truth in 2008.  To this I can add racist content from Michelle Obama's thesis.  We can either sit down in collective Unterkunft or we can send Obama and his enabler Bob Casey packing next year, and send MoveOn.org to the ash heap of history.