Warning: mysqli_free_result() expects parameter 1 to be mysqli_result, bool given in /var/www/html/americanthinker/admin/common/functions/func.general.php on line 126
 The Unified Theory of Obama - American Thinker
|

The Unified Theory of Obama

For as long as I can remember scientists have been trying to put together a Theory of Everything which would explain and connect all the knowledge we have of physical phenomena. So far they haven't been successful, but they keep trying.  I wondered if it would be possible to explain the many contradictions of Obama and the mystery of his origins and incomprehensible nature of his domestic and foreign policies to better understand him and predict why he seems to be steering the ship of state onto the shoals

I think I've finally got it, though a night of watching old movies  -- "The Man in the Iron Mask" and "The Prince and the Pauper" -- helped me along.
Barack is not one person.  The man we know as Barack Obama is really two people, identical (possibly conjoined at the head Janus-like but later separated) twins. Don't laugh. I'll explain.

The Mystery of His Birth
As Donald Trump is reminding everyone, we have no proof that Obama was born in the United States, where, when or to whom. People have offered up a variety of theories to explain why he has spent so much time and money trying to prevent us from seeing his birth certificate, something apparently only he can get released from the Hawaiian birth records sealed vaults. But I believe that the clue we need to unravel the mystery has been hiding in plain sight all along:

Why does he have this incredibly long scar that covers the  sides and back of his head?
We've never seen his medical records, to my knowledge, and he's given no explanation for this phenomenon that I can see, but see for yourself. Something most odd has caused a scar from one side of his head to another curving up over the crown: 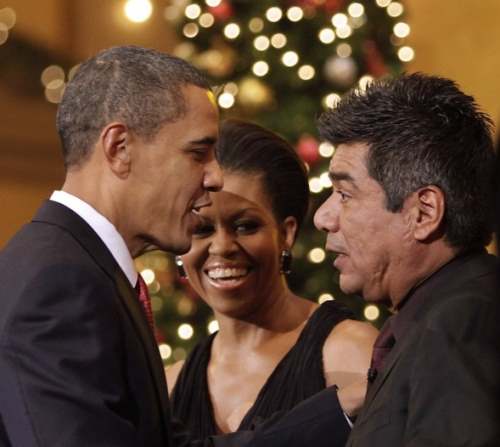 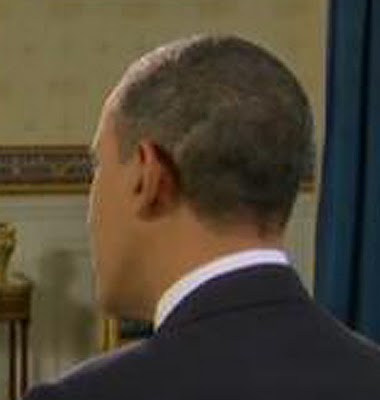 Let's suppose that he was born a conjoined at the head twin and the surgery left its mark, that in fact one twin got the rhythm and cool -- let's call that one "Candidate Obama" -- and he was the one who so charmed people who should have known better like Peggy Noonan and David Brooks. The other was thicker witted and needed folks like Bill Ayers and his own smarter twin to pull him through. Let's call that one "President Obama." 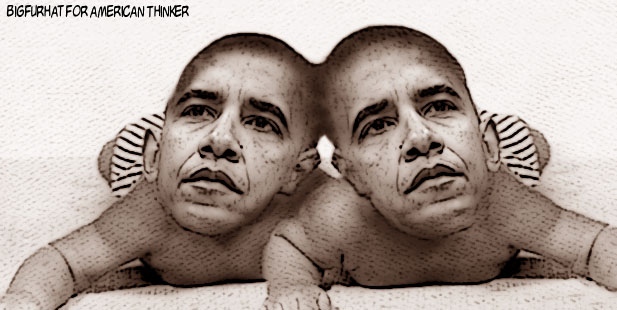 His Intelligence
As is the case with most Democrat politicians, the press has repeatedly assured us that he's a genius of the first order, but like Jack Cashill, I have to wonder about that, particularly as he has not even mastered his native tongue nor learned basic geography. And yet we are told (we haven't seen proof) that he graduated from Columbia University, Harvard Law School and passed the Illinois bar and is listed as a best selling author of two books.
Assume as I do that the author thing is a lie, and that one book was written on the sly by Bill Ayers and the other by some far less gifted ghostwriter, we still have an academic mystery to consider.
But what if he were twins? One of them (Candidate Obama) could sit in an adjoining room writing up the answers from an open book while the other (President Obama) walked back and forth without arousing the proctors' suspicions.  Maybe they even took turns each semester, with one doping up and having fun while the other worked.  Perhaps that explains how he can claim he attended Columbia for two years when that school has records of him being there for only 9 months. One twin just forgot to sign in  the year when it was his turn.
Why Does He Rely Over Much on the Teleprompter?
Simple. Neither one of them can think and talk (or write) at the same time, so one types the words in on the teleprompter and the other reads them. Proof of this is that on those occasions when there's been a glitch in the teleprompting whichever Obama twin is speaking is struck immediately dumb.
Watch and see what I'm talking about:

Is He a Sociopathic Liar or A Hypocrite?
People who pay attention to what he says note that there is not a single promise he made as a candidate he hasn't broken.  Indeed, even his oldest and staunchest allies are complaining that he's turned his back on them.  If anyone can find Code Pink and Mother Sheehan it would be interesting to find out their views on Libya.

Maybe Candidate Obama is in the dungeon with his head in an iron mask and they are keeping him company there.  Surely the press who followed them about when Bush was President and they were treated like paragons on the issue of military actions has been looking for them to find out what they think.  No?
I for one have no notion what he had in mind when he announced we were doing whatever we are doing over there, but then I'm not alone.  It appears neither the Secretary of State nor the Secretary of Defense has any idea either, nor do our purported allies in this move, nor NATO. So why should it bother me that I'm lost?
It seems like just yesterday he was saying that  trying to force  out of power a murderous dictator was a "dumb war" and such a move should be  opposed.  But then again are we trying to force out Gaddafi?  Are we trying to help the rebels?  Who are the rebels and why should be help them?  What is the fighting force?  What are their orders and who is commanding them? I feel like the old man in "Moonstruck" wandering about  saying,  "I  am so confused."
And each day deepens my confusion.
The Libyans aren't confused; they're hightailing it out of that mess as fast as they can.   My friend Rick Ballard makes clear why:

The Italian press is reporting that only 40 recipients* of the UN R2P kinetic humanitarian aid were completely overcome by the experience. I'm sure that the President will be presenting the chart (prepared by l'École polytechnique) showing lives saved or created by his actions within just a few days and we all know that preparing delicious omelets must begin with cracking a few heads eggs.
*That's 40 for Tripoli only. No believable count for the rest of Libya is currently available due to minor disruptions caused by continuing delivery of kinetic humanitarian aid.

I suppose since the kinetic action was announced when one of the Obamas was on a gig in South America the dumb brother got us into this mess.
On the other hand maybe neither one of them has his head on exactly straight.
I mean look at his energy policy -- it's just as jumbled, as  another Just One Minute Poster, JMH notes:

Obama Energy Plan A:
As consumers are priced out of the gas market, force them to buy cars they can't pay for without government subsidies we can't afford which run on batteries that don't exist yet which our electrical grid can't accommodate.
Plan B:
Cut oil imports 1/3 by "investing" in Brazilian production, thus forming a "partnership" which allows us to buy oil from ourselves. And pay for it twice.
Plan C:
After successfully implementing Plan B, recycle Plan A.
Plan D:
Punish folks who won't relocate to densely populated urban areas with public transportation by imposing a gas mileage tax to pay for inter-city high speed rail -- with train stations they'll have to drive hundreds of miles to get to.

I mean on whom can we blame for this one? I think both of them . Sometimes two heads are definitely not better than one.
|