Warning: mysqli_free_result() expects parameter 1 to be mysqli_result, bool given in /var/www/html/americanthinker/admin/common/functions/func.general.php on line 126
 Truth and Science and Facts vs. Unwashed Hillbillies - American Thinker
|

Truth and Science and Facts vs. Unwashed Hillbillies

President Obama explained us to us as follows:

And so part of the reason that our politics seems so tough right now, and facts and science and argument does [sic] not seem to be winning the day all the time, is because we're hard-wired not to always think clearly when we're scared. And the country is scared, and they [sic] have good reason to be.

(Just my unwashed observation: We have a president who knows what our brains are hardwired to do and can describe the emotional state of an entire country, but he can't get subject and verb to agree and pronoun and antecedent to agree in just two sentences not read from a teleprompter. Good thing he didn't say "refudiate.")
Not missing the memo, Bloomberg took up on the president's insight.

A Bloomberg National Poll conducted Oct. 24-26 finds that by a two-to-one margin, likely voters in the Nov. 2 midterm elections think taxes have gone up, the economy has shrunk, and the billions lent to banks as part of the Troubled Asset Relief Program won't be recovered.
"'The public view of the economy is at odds with the facts, and the blame has to go to the Democrats,' said J. Ann Selzer, president of Selzer & Co., a Des Moines, Iowa-based firm that conducted the nationwide survey. ‘It does not matter much if you make change, if you do not communicate change.'"

There we go again: failure to communicate.
Senator John Kerry (who served in Vietnam) blamed it more directly on us, those whom Katie Couric might call "this great unwashed middle of the country" or whom Bill Maher might call "the ignorant hillbilly half of the country."

It's absurd. We've lost our minds. We're in a period of know-nothingism in the country, where truth and science and facts don't weigh in. It's all short-order, lowest common denominator, cheap-seat politics.

What a coincidence: John Kerry and President Obama both mentioned "science" and "facts" in completely independent speeches. Funny how great minds think alike.
OK. Here are some facts. The two charts below show real GDP (a measure of the overall economy) and job growth during recovery, compared to the beginning of the recession (as called by the NBER) for all eleven postwar recessions. 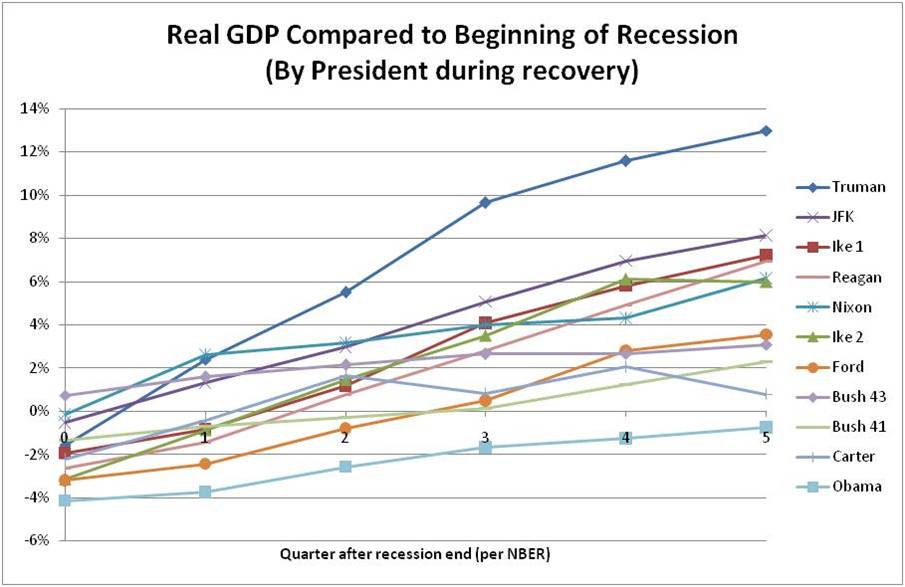 Source:  St. Louis Fed/FRED, GDPC96 and PAYEMS series.
Say all you want about how Obama inherited this recession; he wants credit for the recovery. So let's give him the recovery. Look at how it compares to all the other postwar recession recoveries. To us ignorant, unwashed hillbillies, it sure looks like Obama's "recovery" is going nowhere slowly.
Out of eleven recession recoveries, Obama's is the only one that did not go above its pre-recession GDP peak by the third quarter of recovery. It is still not there even by the fifth quarter. It is one of only two in which there were fewer jobs fifteen months into the recovery than at the beginning of it. Yes, the hole was slightly deeper this time, but there is little evidence that we are even crawling out of it.
I think I know what some of you might say: Obama is only on the bottom of those charts because he started out in the deepest hole. Sorry, but even the rate of improvement in this recovery is historically anemic. The growth in GDP is the third-slowest of the eleven postwar recessions, and the growth in jobs is the second-slowest.
Just so you have all the data (as I am not one to cherry-pick), below is a table of GDP and job growth during the eleven postwar recession recoveries. These reflect the paces of the recoveries, regardless of how deep the original hole was.

I think what Obama means by his "communication" or "message" problem is that he is not trumpeting the news that there actually was one recession recovery even slower than his: George W. Bush's. And we know how President Obama is so hesitant to blame anything on his predecessor.
But I have a few things to say about that particular comparison.

Senator Kerry claimed that "truth and science and facts don't weigh in." So let me weigh in with some more facts. Here is one fact: what President Obama said about his health reform in July 2009.

I think it's important for us to bend the cost curve [down], separate and apart from coverage issues, just because the system we have right now is unsustainable and hugely inefficient and uncompetitive.

Then, when it turned out that Obama's health care reform would bend the cost curve in the wrong direction, Jake Tapper took notice. That gave us another fact: what President Obama said about his health reform in September 2010.

Tapper: "... CMS study from February predicted a 6.1 percent increase, and now post-health care 6.3 percent.  So it seems to have bent it up."

Obama: "No -- as I said, I haven't read the entire study.  Maybe you have.  But -- you know, if -- if you -- if what the reports are true, what they're saying is, is that as a consequence of us getting 30 million additional people health care, at the margins that's going to increase our costs, we knew that.  We didn't think that we were going to cover 30 million people for free.  But that the long-term trend in terms of how much the average family is going to be paying for health insurance is going to be improved as a consequence of health care.  And -- and so our goal on health care is if we can get instead of health care costs going up 6 percent a year, it's going up at the level of inflation, maybe just slightly above inflation, we've made huge progress."  [My emphasis.]

Those words mean two things to this unwashed hillbilly: (1) I have doubts that Obama is "the smartest guy ever to become President," and (2) he lies.
When Obama was trying to sell the plan, he said it would bring the cost curve down. Once his plan was signed into law, he said he knew that it was "going to increase our costs." At least that sure looks like a lie to this ignorant know-nothing. Maybe there's some nuance I don't understand. Or does "down" mean "up" in actuarial science? Maybe Katie Couric could enlighten me; she knows pretty much everything about climate science.
Here is what I think I know about the big achievements of the Obama presidency.

Putting it all together, at the very time that we should be reining government in, Obama is using every means at his disposal to expand it as far in every direction that he can. When we should be trying to avoid the obvious pitfalls of European welfare states, we are doing everything we can to imitate them. If there are facts and science that I'm missing, please enlighten me.
I think I speak for many of us unwashed hillbillies when I say that.
Randall Hoven can be contacted at randall.hoven@gmail.com or via his website, randallhoven.com.
(Primary data sources:  St. Louis Fed/FRED, GDPC96 and PAYEMS series.)
|