Being desirous of pleasing Barack Obama and John Kerry, I will endeavor to stick to facts, science, truth, and argument. The challenge I present in this article could kill three birds with one stone. I propose a single experiment to test two political hypotheses and to solve the Social Security insolvency problem -- all in one fell swoop. (I try to be productive even on my days off.)

Hypothesis 1: Democrats do not expand government in order to solve problems; they use problems as an excuse to expand government.
Hypothesis 2: Republicans only talk about reducing government; when in office, they expand it.
Now, some of you might think both hypotheses have already been proven true multiple times over. But according to the scientific method, you cannot prove a theory true; you can only falsify it. The more tests a hypothesis passes, the more it becomes a "theory." And if a theory keeps passing tests, it gets promoted to a "law." So we should keep testing.
Here, then, is an experiment to test both of these hypotheses at once:
Propose a bill to adjust initial Social Security benefits by consumer prices.
(You might think that's already the way it works. But bear with me.)
According to my hypotheses, if such a bill were introduced, the Democrats would fight it, and the Republicans would fail to support it. But if my hypotheses are wrong and the bill passes, it would have the side benefit of fixing the entire Social Security insolvency problem.
Regarding my proposed bill, we all hear that Social Security is in trouble. That is true, and the Congressional Budget Office confirms it:

Once those trust funds run out, current law says benefits must be cut to the level of revenues from those programs. If DI and OASI are combined in order to "save" the DI portion, the combined fund will run out in 2039.  The graph below shows what will happen. 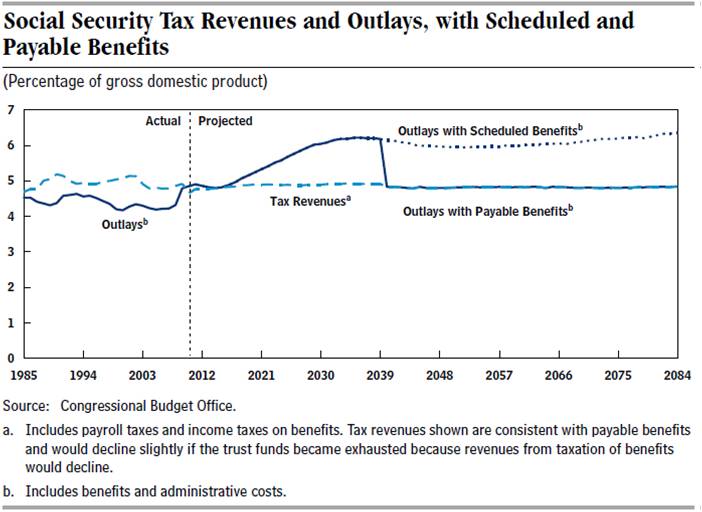 Anyone getting Social Security checks in 2039 (and if you are over 38 right now, that means you) will experience a sudden cut of about 20% which will last for the remainder of his or her life at that point. And anyone not yet receiving SS checks by 2039 will get only 70%-80% of his or her "scheduled benefits" upon retirement.
(By the way, the "trust fund" is money raised by other government borrowing or taxing at that time. The trust fund is not real money squirreled away in a lock box or vault or investments of some kind. It is IOUs from one side of government to the other. All of it comes from future taxes of one kind or another.)
So doing nothing means a 20% or more haircut for everyone who makes it to age 67. Call that Option A.
What are the other options? The CBO identified and scored thirty of them. Importantly, none of the options listed cuts initial benefits for anyone who is already 55 years old. The CBO defines the problem as 0.6% of GDP, and it scores solution options by that same measure. Here is the CBO's list of options and how far they go toward fixing the 0.6% problem. 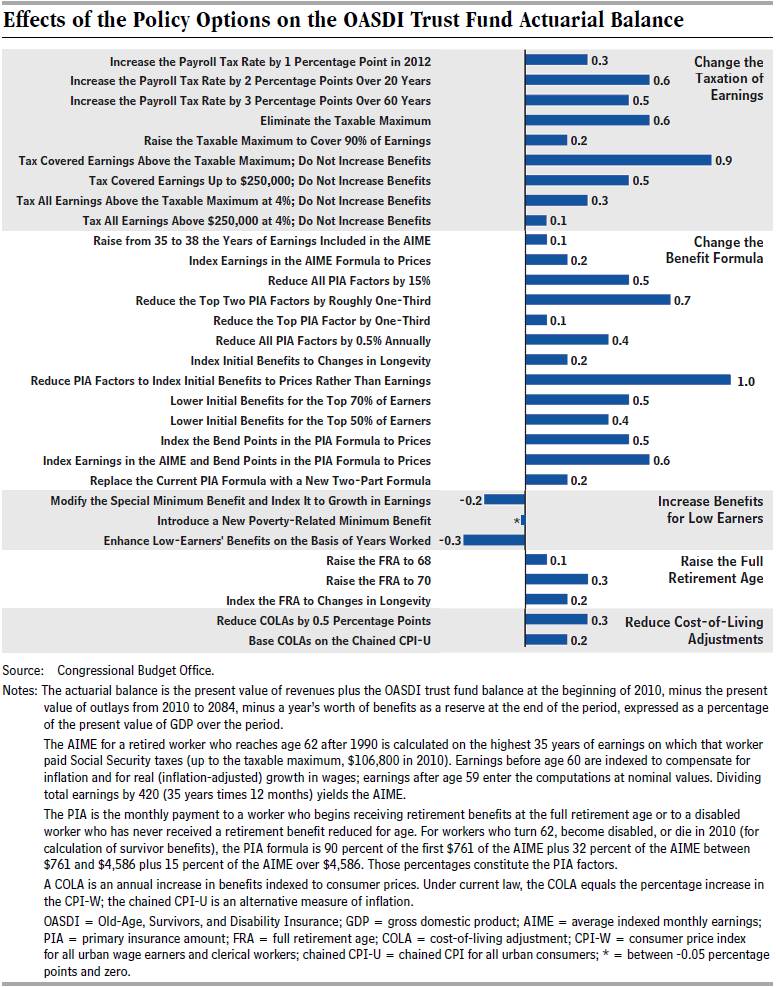 Look at the option that goes farthest to the right, all the way to 1.0% of GDP, meaning it more than solves the problem, with a comfortable 40% margin. That option is called "Reduce PIA [primary insurance amount] factors to index initial benefits to prices rather than earnings." Here is how the CBO explains it: "Beginning in 2017, average initial benefits for newly eligible retirees would increase with prices rather than with prices and real earnings."
So initial benefits, for new retirees, would go up with prices. Didn't you think it already worked that way? I did. Annual cost-of-living adjustments would continue to be indexed to consumer prices, just as they are now.
What are the ramifications of such an option?

For my money, this is about as painless a solution I could ever dream of. With that 0.4% of GDP left over, they could probably delay the fix beyond 2017, perhaps for those now 50 or even 40. The "pain" of this solution is all but undetectable.
So your options could be:

A. A 20% across-the-board cut in benefits for everyone, starting in 2039.
B. The Social Security solvency problem solved with no tax increases or real benefit cuts.

But according to my hypotheses, the Democrats will scream that we are murdering Grandma; it is a "benefit cut," compared to current law, for those who retire in 2017 or later. They won't mention that it affects no one over 54 right now or that the alternative to this nearly imperceptible cut is a 20% or more cut for everyone after 2039.
Democrats will propose, if anything, options that increase taxes. They never cut government; they only expand it, per my hypothesis. They will call increasing the payroll tax from 6.2% to 8.2% a simple "2% increase" rather than the 32% increase it would really be. Or they will simply remove the income cap on payroll taxes without also increasing the benefits for those who pay them.
(Here, by the way, is where I disagree with the CBO. The CBO uses static analysis, which assumes tax increases have no impact on economic behavior. I think such tax increases would destroy growth, and the government would not collect anywhere near what it thinks it would; it might even collect less. That is, like the Stimulus, these tax-raising options will not fix what they are supposed to fix.)
Actually, the Democrats won't do anything, because 2039 is 29 years away. That is fourteen elections away for representatives and four elections away for senators. And if my second hypothesis is correct, Republicans will be happy to oblige. "Hands off my Social Security," says the GOP's favorite voting group. After some gnashing of teeth, both parties will choose Option A by default.
So can one of you 435 House members propose this fix, maybe one of you new guys? In one fell swoop, you can test the seriousness of your fellow statesmen and maybe even solve one of our major entitlements problems.
You don't need a Deficit Commission to cover for you; the CBO already did all the heavy lifting. Pretend it's your job. Do it instead of, say, proposing a Potty Parity Act or designating a day to celebrate motherhood in the U.S. or doing whatever other important stuff Congress does. Take a day and fix Social Security. That still leaves 364 days in the year for fundraising.
Social Security is easy. Medicare/Medicaid/SCHIP/ObamaCare reform is hard. If you can't do easy, we know you can't do hard.
But here's the rub. My real hypothesis is that government is broken. The Democrats of 2010 could not even write a budget at all. That is one of Congress's few defined tasks, and the Democrats blew it off. No one will even try to fix Social Security, one of the bigger problems we have, but with one of the easiest solutions. It was a third rail, it is a third rail, and it will remain a third rail until, oh, 2039.
Please, prove me wrong.
Randall Hoven can be contacted at randall.hoven@gmail.com or via his website, randallhoven.com.
|