Media Demands, 'Take Us to Your Leader, Sarah Palin!'

Is Sarah Palin the leader of the Tea Party Movement? This is asked as a "gotcha" question by the liberal mainstream media of every spokesperson of the Tea Party Movement. The liberal mainstream media is so far out of touch with the majority of Americans that their rationale is that if they can get tea-partiers to say a wacko like Palin is their leader, then it will confirm that the movement is nothing more than a bunch of extremist fringe loonies.

In their arrogant, elitist, bi-coastal, ACLU-joining, New York Times-reading, and "smarter than common Americans" minds, the liberal mainstream media cannot grasp the concept that Sarah Palin is the voice of most Americans. Thus Tea Party patriots' great love and admiration for her. Palin is the conservative voice America has been waiting for.
Palin boldly speaks out against political correctness and stands up for conservative principles and values. Not since Ronald Reagan has a politician so unapologetically championed conservatism. With all due respect to her femininity and beauty, Sarah Palin is the long-awaited John Wayne of the conservative movement. If only more of our "walk on eggs, careful not to offend, and pandering to political correctness" male conservative politicians would take a cue from this extraordinary woman.
No, Palin is not the leader of the Tea Party Movement -- but not because she is unqualified. Sarah is extremely qualified. She is not the leader of the Tea Party Movement because it does not require a leader at this time. Self-appointed leaders are frauds. True leaders are selected by the people. If, or when, the Tea Party movement demands a leader, Palin is a very strong contender.
I witnessed firsthand the power of Palin's presence and the emotional effect she has on patriots. I toured nationally on the Tea Party Express. Sarah Palin spoke at our Boston rally.
Our thirty-member team was positioned on the side of our Tea Party Express bus. The plan was for Palin to pose for a picture in front of our team after her speech.
Talk about the best-laid plans gone awry. When Palin came down from the stage, all heck broke loose. Paparazzi were jockeying for a position to take pictures. People swarmed to Palin like bees to honey. They were screaming for Sarah to look in their direction and autograph things. While the police did not have a problem controlling the crowd, the patriots' excitement level bordered on frenzy. They loved her.
While being pushed from both sides by other photographers and Palin fans crushing our Tea Party Express team, our photographer managed to shoot a picture. Not the one we intended, but a picture. 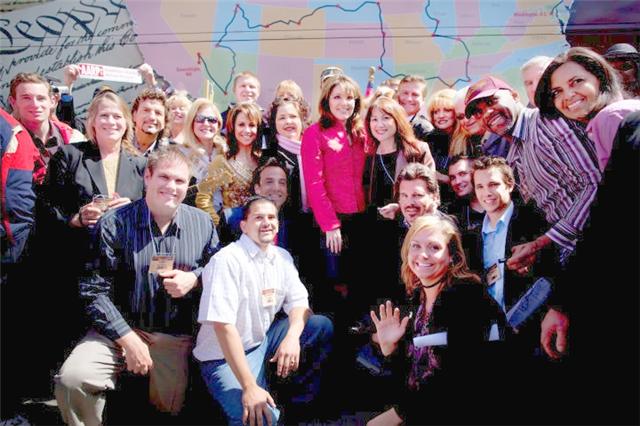 So why is Sarah Palin the liberal mainstream media's great white whale, an obsessive target whom they are fanatically and irrationally committed to destroy? Sarah Palin equals America as our Founding Fathers intended it to be: built on godly principles, freedom, and respect for individual rights. The liberal mainstream media are disciples of the religion of progressivism promoting their new vision of America: gay marriage, anti-God, anti-capitalism, anti-individual, and pro-government totally controlling our lives. Not only is America under attack by Islamic religious zealots, but we are being attacked by progressive religious zealots as well.
Think of Palin as baby Moses and the liberal mainstream media as Pharaoh. They must destroy Palin because she just might set her people free. So yes, politically, "Sarah Palin must die!" is the battle cry of the liberal mainstream media.
I will take it a step further and say the campaign against Sarah Plain is really a battle of good versus evil.
I remember in response to Palin's 2008 VP nomination acceptance speech, Hollywood actress Pamela Anderson said, "[Palin] can suck it!" Why such a passionate, angry, and vulgar response to a woman who epitomizes what Hollywood feminists claim to want for women -- success in and outside of the home?
The truth is anyone espousing good, wholesome American values and a love for her country is as repulsive to America-hating progressives as displaying the cross is to vampires.
Driven by their contempt, the liberal mainstream media will continue pestering tea-partiers: "Admit it, Sarah Palin is your leader!" They just don't and never will get it. This is why it is foolish for conservative politicians and Tea Party spokespersons to water down our message in a futile quest for "positive" media coverage. Remember, like they do Palin, the liberal mainstream media desire us Tea Party patriots politically dead.
Without question, the strong woman from Alaska has inspired and continues to inspire patriots to boldly defend and fight to restore our freedoms, liberty, and culture. So progressives, be afraid. Be very afraid. With Palin, Limbaugh, Beck, Hannity, Levin, and others leading the charge, and with God on our side, we will take back America.
Lloyd Marcus (black) Unhyphenated American -- lloydmarcus.com -- Spokesperson/Entertainer of Tea Party Movement & Tea Party Express -- The American Tea Party Anthem CD/album -- Confessions of a Black Conservative
|