Warning: mysqli_free_result() expects parameter 1 to be mysqli_result, bool given in /var/www/html/americanthinker/admin/common/functions/func.general.php on line 126
 Laff It Up, Tax-Lovers - American Thinker
|

The national debt problem has become so apparent that it is recognized even in San Francisco now. Would raising taxes help?

In January 2009, I wrote, "We have less than 10 years to get our mess straightened out."  Here is what the San Francisco Chronicle reported fifteen months later, on April 5, 2010.

They should have called me.
But how do we solve this problem?  Can't cut Medicare; we don't want Grandpa to die. Can't cut Social Security; we don't want Grandpa eating dog food. Can't cut interest payments; Grandpa needs to cash in his government bonds every so often to afford his utility bills. And within those critical ten years, I become Grandpa.
Entitlements themselves eat up every bit of revenue. To pay for national defense, courts, highways, etc., we have to borrow -- all of it. If you want to cut the defense budget in half, like the Communist Party USA and George McGovern do, that would still leave a deficit of over $1 trillion last year and this.
If you think I'm exaggerating, look at the numbers. The CBO reports that total revenues in 2009 and 2010 were $4.28 trillion. But outlays were $7.042 trillion. Revenues are paying only 61% of our bills; the rest is borrowed. On the other hand, entitlements plus interest on the debt accounted for 65% of spending in 2009 and 61% in 2010. In short, every bit, and then some, of current revenues is totally used up by entitlements and interest. Every dollar spent on national defense, highways, courts, veterans, energy, education, etc., etc. is 100% borrowed.
So to save Grandpa and still do the few remaining constitutional functions, we'll have to raise taxes, right? The Democrats already raised them about $500 billion with ObamaCare. Or at least they think they did.
There is this little thing called the Laffer Curve. It states the obvious: If tax rates are zero, government collects zero money. If tax rates are 100%; government collects zero money. (If everything you produce is taken from you, you starve and die, even if you are forced by slavery to work for nothing.) In between, government collects something. The maximum collection point is somewhere between 0% and 100%.
While some have disputed the Laffer Curve concept, what they really disputed was where we are on it. The concept itself is a truism. If we are on the "left" side of the peak, government could raise tax rates and collect more money. But if we are on the "right" side, government just loses more money the more it raises tax rates.
So where are we on the Laffer Curve? A couple of economists (Harold Uhlig and Mathias Trabandt) figured it out and published the results last August.
The chart below shows their curve for taxes on "labor" (i.e., wages). (The multiple curves are for differing technical assumptions, but all results are similar. The two ends do not go down to zero because other, non-labor, taxes would still exist in the assumptions of this chart. The vertical axis is total government revenue, with 100 being what the government collects now, or did in 2006.) 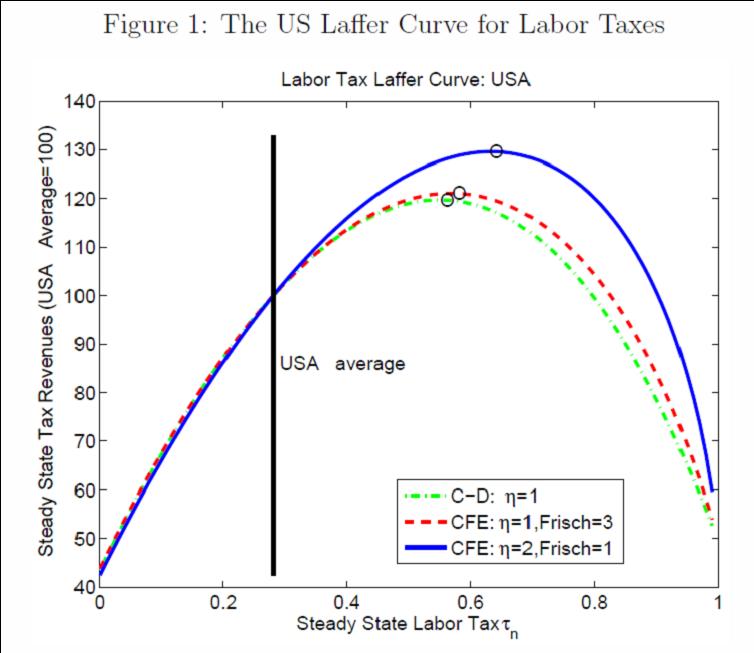 That graph says that our wages are taxed only at 28%, but the government would maximize its revenue by raising our tax rates to about 60%. If the government did that, it could raise its revenues by 30%. Bad news: We are looking like a hamburger to a starving man.
Taxes on capital (capital gains, dividends, interest) are a slightly different story. If government raised them from the current 36% to about 65%, it could increase its revenues by only about 6%, everything else equal.
This might sound ridiculous, but it passes a certain smell test. From 1986 though 1992, Sweden collected 61% to 63% of its GDP in taxes. Yet its economy did not die then. In that same time period, its real GDP grew 2.6% per year -- not great, but not terrible, either. A modern Western country can apparently survive a tax bite above 60% of everything and keep treading water.
Now, some folks are trying to use these results to make Laffer Curve enthusiasts eat crow and confess that tax increases would really raise revenue. Reagan was wrong!
Not so fast.
Our economists also looked at what would happen if we changed tax rates on both labor and capital together. Their result is summarized by the chart below. 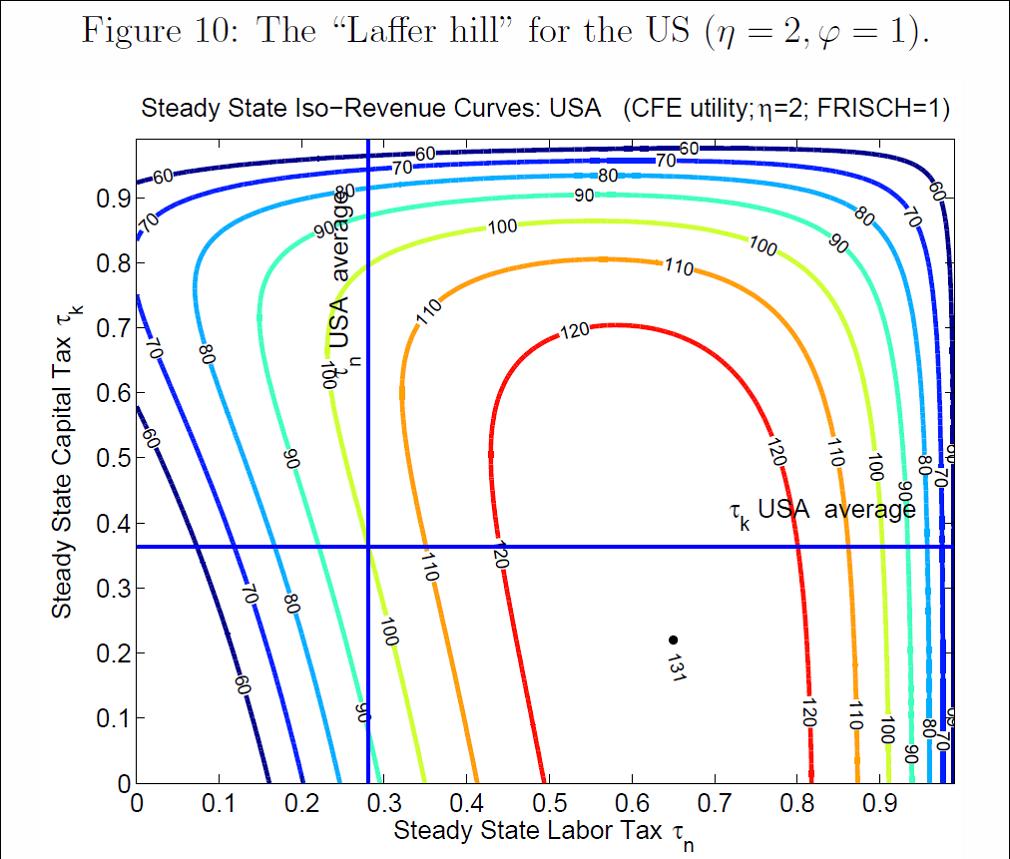 Look at it as a contour map of a hill, with the hill's peak being that little point that says "131." At that point, the government would raise 31% more than it does now. That means that the government would actually make more money by cutting taxes on capital and raising them on labor. The best place to be for a ruthless revenue-maximizer is a tax rate on labor of about 65% (from the current 28%) and a tax rate on capital of about 22% (from the current 36%).
That's not something tax-lovers want to hear. If they want to buy the "good parts" of this Laffer Curve story, they also need to buy the part that says that Warren Buffet and others who don't "earn" their income should get their tax rates cut by over a third, while those who work for a paycheck should have theirs more than doubled. Sell that to the AFL-CIO.
If you read that chart correctly, tax rates on capital make little difference on what the government actually collects. At most points on that "hill," you have to go a long way "north" (higher tax rates on capital) to get much higher up the hill (more money to government). Yet go too far "north" in many places, and you actually go downhill.
In short, taxing "unearned income" buys just about nothing, and could even cost you, even if you are ruthless in maximizing government revenue.
That leaves taxes on labor. If our ruthless revenue-maximizers double them, they could increase revenues by 30%.
But what does that mean? First, it is very limited. For the last several decades, the federal government raised about 18.3% of GDP on average. If our ruthless federal revenue-maximizers went all-out in raising taxes, they could raise maybe 24% of GDP. That is not quite salvation when the federal government is spending over 24% of GDP right now! (And it plans to spend that much forever. See that CBO report again.)
So even taking all this Laffer Curve analysis as absolute truth, as good as it might appear to our ruthless revenue-maximizers, it still only gets you to almost cover current spending. Almost! And to get there, you'd have to more than double tax rates on people who earn paychecks.
You Democrats keep selling that story.
It gets worse. When our ruthless revenue-maximizers raise tax rates in such a way that the CBO calculates that the government will collect $1, it will really collect only 49 to 68 cents, depending on whether labor or capital is taxed. That is, our economists concluded that "dynamic scoring" is real.
So when the CBO calculated that the government would collect about $500 billion in various taxes and fees with ObamaCare, these economists say it will collect only maybe $250 to $340 billion. There goes the entire deficit reduction that the Democrats advertised with ObamaCare. (And that's why they fought tooth and claw against the CBO using dynamic scoring.)
If you tax-loving folks want to rub our noses in this Laffer Curve analysis, you must also admit to a few little things I'm betting you don't want to advertise.
There's a reason you haven't heard of this analysis. The supply-siders don't want to hear that we are on the left side of the Laffer Curve. And the tax-lovers don't want to admit all that stuff about tax cuts for the rich and "still not enough."
Reality just keeps biting. As Maggie Thatcher said, "eventually, you run out of other people's money." "Eventually" will happen within the next ten years.
Randall Hoven can be contacted at randall.hoven@gmail.com or via his website, randallhoven.com.
|