Warning: mysqli_free_result() expects parameter 1 to be mysqli_result, bool given in /var/www/html/americanthinker/admin/common/functions/func.general.php on line 126
 Obama to Israel: 'Drop Dead' - American Thinker
|

It took a while -- fourteen months, to be exact -- but both the ADL and AIPAC have issued very solid statements condemning the president's new verbal war on Israel. The organizations are further asking for the administration to curtail the public berating of its supposed ally and work with Israel in a more diplomatic fashion on both the peace process and Iran.

What is disgraceful is that so far, exactly one elected Democrat in Congress has done the same: Congresswoman Shelley Berkley of Nevada. Sadly, Democrats seem to care far more about passing health care legislation this week than protecting the U.S.-Israel relationship from Obama's assault. It's apparent that indifference of (i 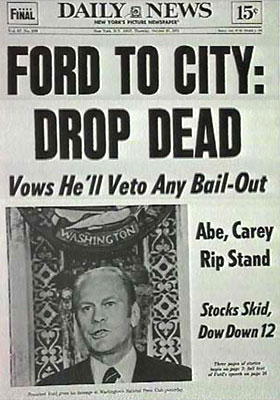 f not hostility to) Israel's survival is at work. The infamous New York Daily News headline about Gerald Ford's response to New York's fiscal crisis was less fair to him (he never said these words) than the title of this article is to President Obama.
It is interesting that David Axelrod, who blasted Israel on network news programs on Sunday and is a proud standard-bearer of the Millard Fillmore label when it comes to the history and politics of the Middle East conflict (for the record, Fillmore headed the Know Nothing Party back in the 1850s), will be honored by the NJDC (National Jewish Democratic Council) at a coming event. Axelrod has pretty much a perfect record of having avoided any connection with any pro-Israel or Jewish communal activity in his long political career, with the notable exception of raising money from Jews for Democratic candidates.
This Obama does well, too. In Obama's case, the handwriting as to his sympathies in the Middle East conflict (not to be confused with his lies delivered to AIPAC conferences) was pretty well-documented well before he was elected --  the twenty years he listened in rapture to the sermons of Reverend Wright; all those dinners and babysitting and chit-chat with Rashid Khalidi and Ali Abunimah; the close friendship with Samantha Power (who sought an international  force to invade the West Bank and liberate it from Israel); and the years spent in the most anti-Israel hothouses in America -- the neighborhoods where elite colleges are located.
Martin Peretz has it right that America elected its first third-world president, and Obama is behaving accordingly. His sympathies lie with the Palestinians. He is, after all, a redistributionist on all issues, and he will always favor the group or state he perceives as weaker. The flak attacks by Hillary Clinton, other State Department officials, and Axelrod will do nothing to advance the peace process, ostensibly the goal of the administration. Since Oslo, the Palestinians for over fifteen years spoke directly to Israelis without intermediation, even during the intifada.
When Obama launched his presidency with a call for a 100% settlement freeze on all land beyond the Green Line, including natural growth of settlements, he enabled the Palestinians to avoid coming back for talks without those conditions being met. Why would the Palestinians be more pro-Israel than the White House and accept less than the White House was demanding of Israel? Now the PA can hang back some more and honor some more mass murderers of Israelis while they wait for Obama to deliver more Israeli concessions before talks begin (prisoner releases,  extending the settlement freeze to Jerusalem, eliminating more roadblocks, easing the blockade of Gaza).
Prime Minister Benjamin Netanyahu is right to let the Americans know that Israel will continue to build within its capital. To please the Americans and not establish facts on the ground, only new housing for Palestinians would be allowed. Of course, when the ten-month freeze on new settlements in the West Bank was agreed to, Bibi came in for high praise. He specifically excluded Jerusalem from that freeze.
The announcement of the 1,600 units in a neighborhood where 16,000 Jews already live was step four in a seven-step approval process, with no construction for three more years. So yes, maybe it was an ill-timed announcement with Joe Biden in town, given how everyone needs to walk on hot coals to avoid giving the PA another excuse not to negotiate even indirectly with Israel.
For the Obama administration to blow up over this as some grave insult is ridiculous but telling. This is a real and deliberate provocation by Obama, not Israel. Here was an opportunity for the administration to let Israel know which side Obama backs.
Sad to say, even J-Street has been better than Obama this week. The White House had nothing to say (no condemnation, to be sure) about the Palestinian Authority honoring a terrorist mass murderer of Israeli Jews last week. Even J-Street said that this was a provocation and condemned it.
Murdered Jews or Jewish apartments: Obama evidently finds the latter more repellent. Then again, Obama was silent on the mass murder of hundreds of Christians in Nigeria by Muslim marauders. Never will an unkind word be said about Muslim murderers or Palestinian killers that might detract from Obama's charm offensive to the Muslim world -- the one that so far has accomplished only a projection of weakness, cowardice, and a loss of any ability to weigh competing claims fairly.
Richard Baehr is chief political correspondent of American Thinker.

Readings:
Jennifer Rubin on who stands with Israel (add Joe Lieberman no longer a Democrat, to the list);
John Podhoretz on Obama's new approach, which put very simply, is not very smart. But then again, the ranks of those deluded or dazzled by Obama's supposed brilliance drops every day;
David Horovitz exposing the fragility of US support for Israel in this Administration;
At least the American people still stand with Israel;
Gallup:   Greenberg, Quinlan, Rosner;
Abe Foxman and the ADL;
AIPAC;
Another lie: that Israel's settlement policy is causing American deaths in Pakistan , Afghanisan and Iraq.  But of course, if only there were no building east of the green line, then Al Qaeda and Iran would lay down their arms.
On Iran, the Administration is doing nothing fast.  But the Administration is preparing the ground for explicit linkage; Jerusalem housing will be used to explain the Administration's failure  to win UN sanctions, and for Iran getting the bomb.
Wall Street Journal;
Two from Barry Rubin: first- some facts on Jerusalem construction; Why the PA is smiling;
Melanie Phillips, one of the last remaining voices of sanity in Britain.
|