Warning: mysqli_free_result() expects parameter 1 to be mysqli_result, bool given in /var/www/html/americanthinker/admin/common/functions/func.general.php on line 126
 The AGW Smoking Gun - American Thinker
|

By Gary Thompson
A key component of the scientific argument for anthropogenic global warming (AGW) has been disproven. The results are hiding in plain sight in peer-reviewed journals.
Politicians and scientists still cling to the same hypothesis: Increased emission of CO2 into the atmosphere (by humans) is causing the Earth to warm at such a rate that it threatens our survival. The reality of our global temperatures, the failure of these catastrophic predictions to materialize, and the IPCC scandals all continue to cast serious doubt on that hypothesis.
The only rebuttal given by AGW proponents is that the scandals of the IPCC don't negate the science (i.e., unscrupulous behavior by a few don't negate the rock-solid science), so it seems that the only way to disprove the AGW hypothesis is to address problems with the science. Climate science is very complex, and AGW proponents dismiss the scientific arguments unless the data are contained in journal papers that are "peer-reviewed."
Three peer-reviewed journal contain data contradicting the AGW hypothesis. But before the journal papers are reviewed, here is a little background on the science.
The Greenhouse Effect is real and necessary for life on Earth. Without it, our world would be a frozen ball that would not be hospitable for life as we know it. The harmful stuff (x-rays and gamma rays) is filtered out, but the light in the visible spectrum enters, and that light energy warms our Earth. The land and sea then respond to that warming energy by emitting light in the spectrum of the infrared (IR), and that energy takes the form of small packets of energy called photons. When those IR photons reach the atmosphere, some of them get absorbed by certain molecules, and that absorbed energy is transferred into the elements of the molecules. That energy causes the molecules to vibrate and heat the atmosphere, and finally, the atmosphere transfers some of that energy back to the Earth's surface. Again, this is necessary, because if we didn't have this blocking of IR wavelengths, our average temperatures on Earth would be about 32 degrees Celsius cooler (-18ºC instead of the current 14ºC). One of the greenhouse gases (GHG) that reflects these IR wavelengths is CO2, but there are others, such as water vapor, ozone (O3), methane (CH4), and CFCs.
The science behind the AGW hypothesis is that increased amounts of CO2 in the atmosphere (that humans produce by burning fossil fuels) will block more outgoing long-wave IR radiation (OLR) from exiting the atmosphere and thereby warm the surface. It is well-known that IR radiation causes CO2 molecules to vibrate, but only at very specific wavelengths (wavelengths are the distances between peaks of each wave), and that wavelength is 15µm. (Fifteen µm means that each wavelength crests at a distance of 15 millionths of a meter.) As was discussed above, this vibration of the molecule causes it to heat and then radiate IR radiation back toward the atmosphere and the surface of the Earth. If the solar activity is taken to remain constant, more CO2 in the atmosphere will trap more of the OLR, and thus cause a net heating of the planet.
So what type of experiment could be performed to test this AGW hypothesis? If there were satellites in orbit monitoring the emission of OLR over time at the same location, then OLR could be measured in a very controlled manner. If, over time, the emission of OLR in the wavelengths that CO2 absorbs decreases over time, then that would prove the AGW hypothesis (i.e., that OLR is being absorbed by CO2 and heating the planet instead of being emitted from the atmosphere). But what if, over time (say, over thirty years), the emissions of OLR wavelengths that CO2 absorb remained constant? That would disprove the hypothesis and put the AGW argument to bed.
As luck would have it, that experiment has actually been performed! Three journal papers report the data from three monitoring satellites that have measured the OLR of 1997 and 2006 and compared those measurements to 1970, and they are located here, here, and here.
There were three different experiments performed in space to measure OLR emissions. The Infrared Interferometer Spectrometer (IRIS) was performed in 1970, the Interferometer Monitor of Greenhouse Gases (IMG) was performed in 1997, and the Tropospheric Emission Spectrometer (TES) was performed in 2006. All of these experiments were performed over the Pacific Ocean and confined to the same three-month period (April through June), and the data were limited to cloudless days. The variable measured was brightness temperature, which is given in degrees Kelvin (K). Higher brightness temperatures correlate to higher emissions (meaning that more OLR is emitted to the atmosphere and less is absorbed by GHG).
The figure below (from the first link above) shows a comparison of OLR emission in 1997 vs. 1970. (Positive values indicate that more OLR emission was measured in 1997 vs. 1970, and negative values indicate that less OLR emission was measured in 1997 vs. 1970.) The top graph is taken over the East Pacific, and the bottom graph is taken over the West Pacific. The middle line is the actual measurements, and the other lines show the upper and lower uncertainty ranges. The x-axis of the graph is given in wave numbers per centimeter (cm), and the area that relates to CO2 is at the far left of the graph (700 wave numbers per cm). After analyzing this graph, the following conclusion can be drawn: There is actually an increase of OLR emissions in 1997 as compared to 1970! 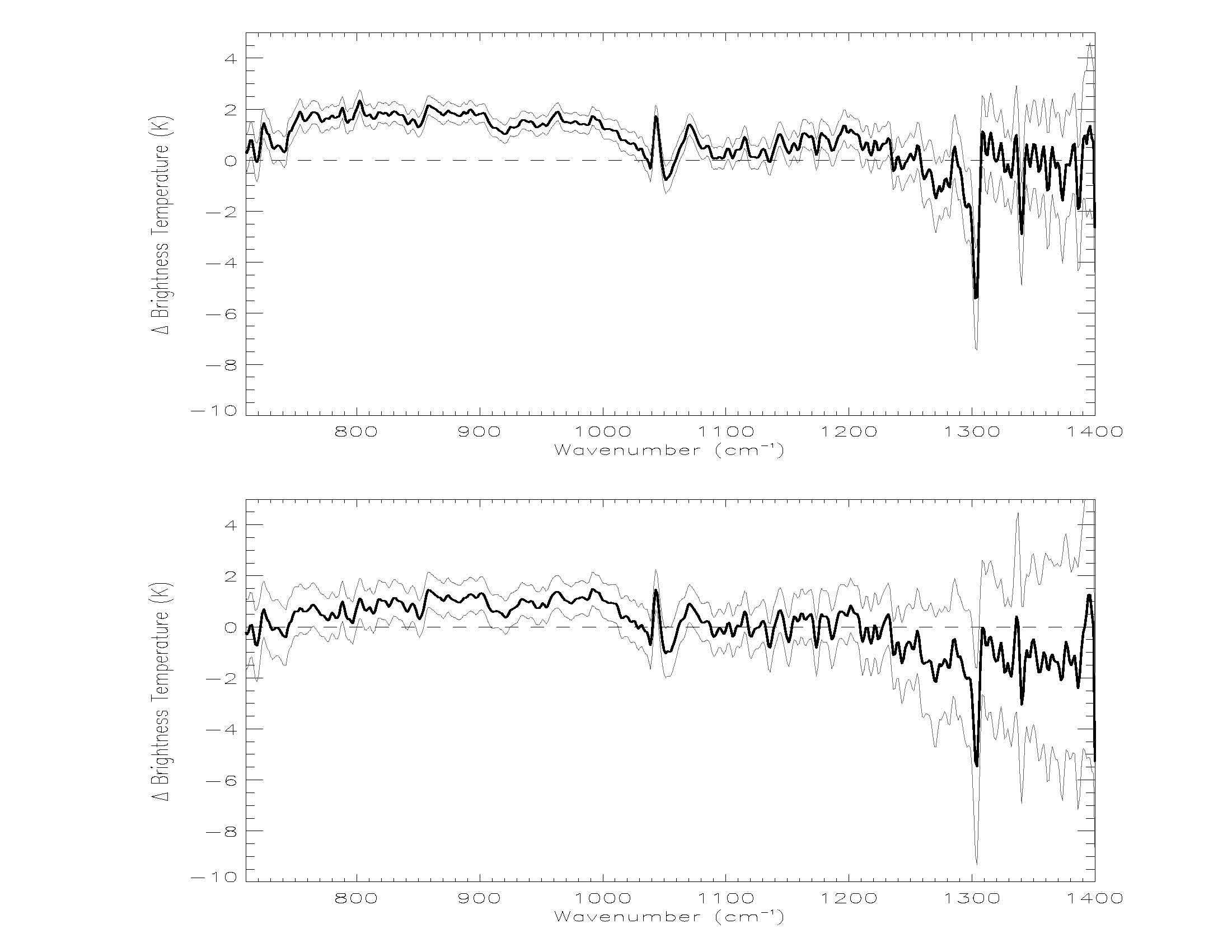 The next figure (from the second link above) shows the actual measurements of OLR emission in 1997 vs. 1970. The dark line is the IMG data (from 1997), and the gray line is the IRIS line (from (1970). After analyzing this graph, the following conclusion can be drawn: The 1997 OLR associated with CO2 is identical to that in 1970.

The next figure (from the third link above) shows the OLR emission from TES (in 2006). The black line is the actual measurement data, the red line is what the climate models show, and the blue line is the difference between the actual and model data. 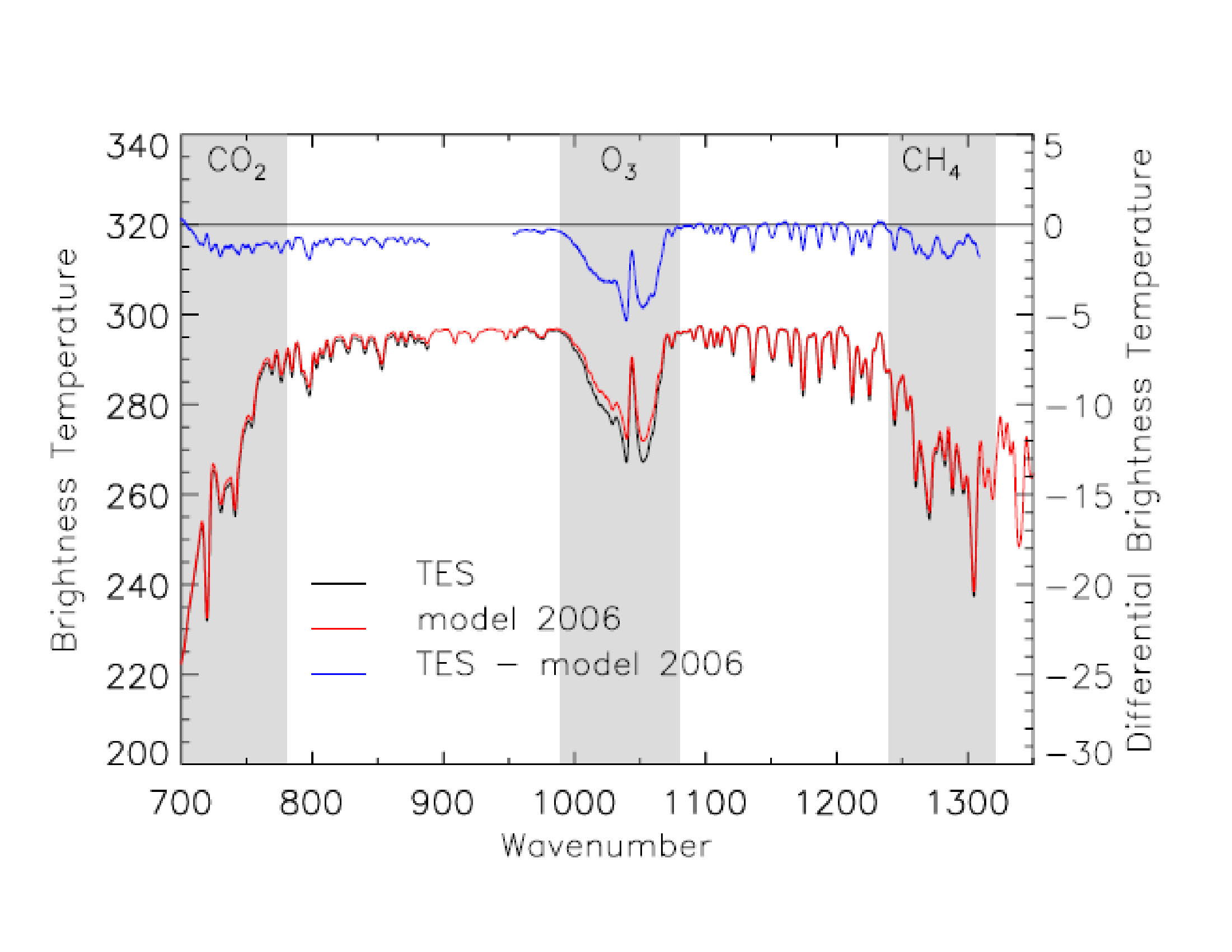 The final figure (from the third link above) shows the OLR emission from IMG (1997). Just like the previous figure, the black line is the actual measurement data, the red line is what the climate models show, and the blue line is the difference between actual and model data. 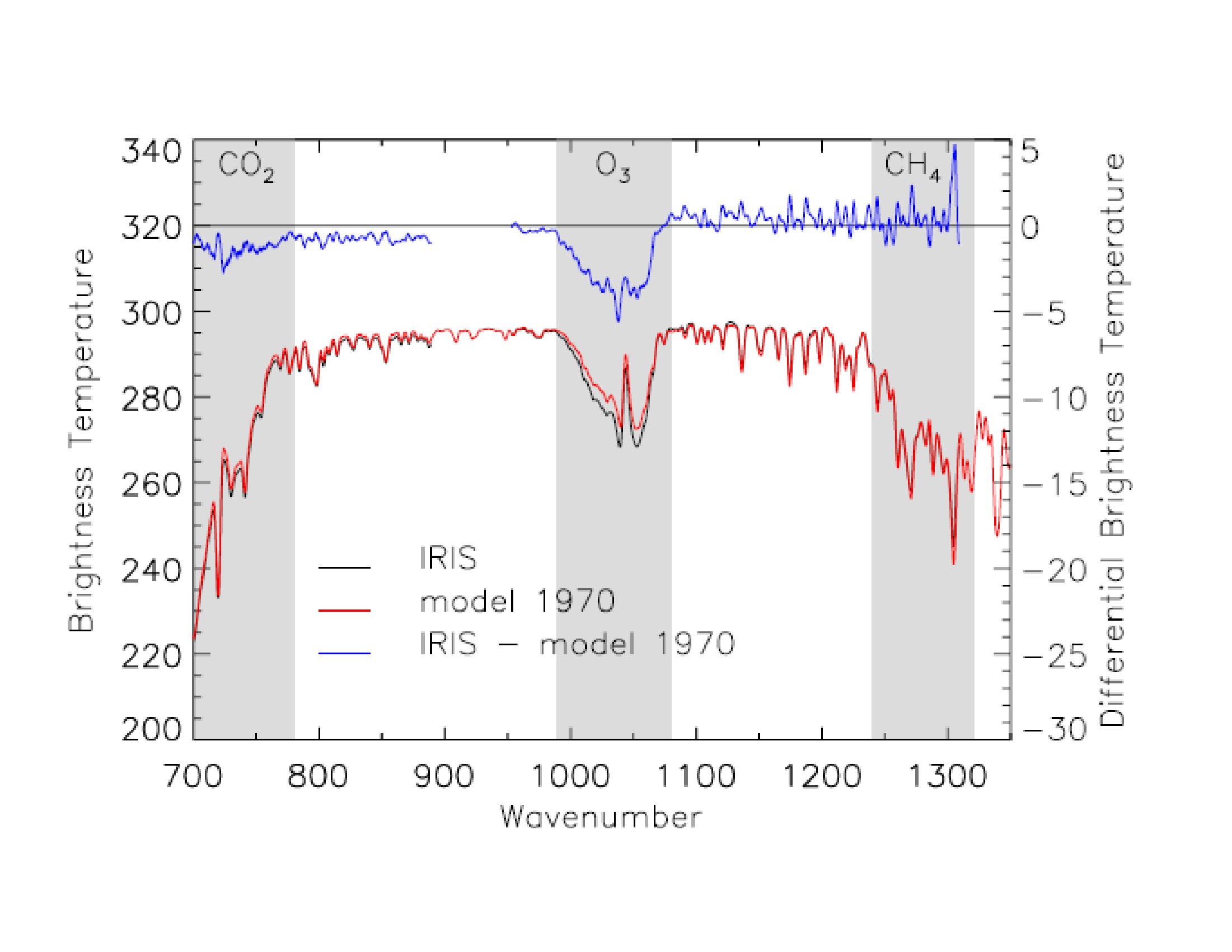 The last two graphs can be placed on top of each other, and the black lines (actual measured data) are basically copies of each other. That means that there was no difference in OLR between 1970 and 2006.
Since the scales on the Y-axes for the previous two graphs are large and the differences between OLR claimed in the paper are small, the authors of the paper provided the next graph which plotted only the difference between 2006 and 1997 measurements (values above zero show an increase in OLR at that wavenumber and values below zero show a decrease in OLR at that wavenumber).  The wavenumbers highlighted (in gray) on the left of the graph are associated with CO2 absorption and there is a decrease in OLR for the lower wavenumbers and an increase in OLR for the higher wavenumbers.  Since half the wavenumbers experienced a decrease and the other half experienced an increase, the data is not compelling enough to make conclusions either way with regard to OLR for these wavenumbers associated with CO2 absorption.[1] 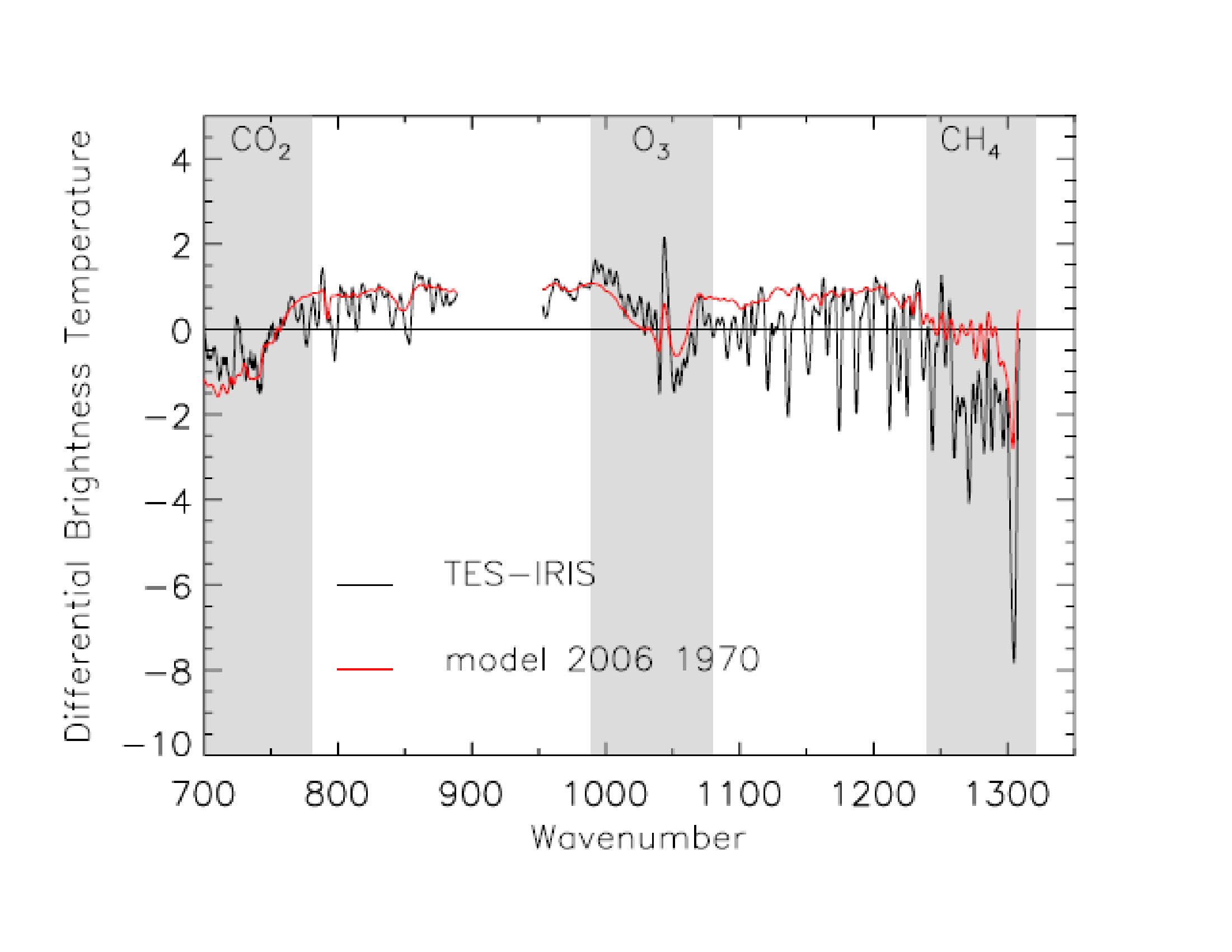 All three of the links referenced here devote the latter sections of the papers to removing the impact of surface temperatures and water vapor and graphing the OLR that is associated only with trace GHGs. The authors perform this trick (there is that word again...) based on the climate models and not through actual measurements, and surprise, surprise -- these simulated results show a reduction in OLR emission with wavelengths that are absorbed by CO2. Computer-simulated results based on climate models are never a replacement for actual measured data, and they should never be used to draw conclusions when actual measured data contradicts those models.

It should be noted that the authors of the three of cited papers never reached the same conclusions that are being stated in this article.  The authors of the cited papers either reached the opposite conclusion (OLR has decreased) or made conclusions about how the observations compared to models.  Using the actual measured data in these cited papers to claim that there has not been conclusive evidence of a reduction of OLR that is absorbed by CO2 over the period from 1970 to 2006 is unique to this article and should not be confused with the conclusions reached by the authors in their cited papers. [1]
So the results of three different peer-reviewed papers show that over a period of 36 years, there is no reduction of OLR emissions in wavelengths that CO2 absorb. Therefore, the AGW hypothesis is disproven.
It should be noted that another paper written by Richard Lindzen and Yong-Sang Choi (both work at MIT's Department of Earth, Atmospheric and Planetary Sciences -- Lindzen is a professor and Choi is a postdoctoral fellow) reveals the differences between the measured OLR and its impact on temperatures vs. climate models. In the paper, the data showed that OLR increased when sea surface temperatures increased, so this is in direct contradiction to the AGW hypothesis that less OLR should be emitted since more CO2 is absorbing it and warming the planet. Furthermore, in contradiction to the climate models, these results show that OLR is acting like a negative feedback (cooling the surface) instead of a positive feedback (radiative forcing). The Lindzen and Choi paper dealt in general with all OLR wavelengths and didn't show granularity with respect to specific wavelengths that were related to various GHG absorption, but the fact that the entire OLR emission spectrum didn't behave like the eleven climate models' predictions means that "the science isn't settled."

[1] Article was updated with these paragraphs and chart 5 on 2/22/10 to clarify points raised by critics.
|