Warning: mysqli_free_result() expects parameter 1 to be mysqli_result, bool given in /var/www/html/americanthinker/admin/common/functions/func.general.php on line 126
 The Perils of a 'Policy' President - American Thinker
|

The last three Democratic presidents are similar.  They are policy presidents: they all believe in the rational, systemic approach to governance.  That's what David S. Broder, dean of the Washington press corps, has noticed.  And he realizes that it's a problem.

Of course, liberal Broder did not come up with this on his own.  He got it from the inaugural issue of a new conservative magazine, National Affairs, and an article "Obama and the Policy Approach" written by a conservative thinker, William Schambra, from a conservative think tank, the Hudson Institute.

Schambra sees... that "Obama is emphatically a 'policy approach' president. For him, governing means not just addressing discrete challenges as they arise, but formulating comprehensive policies aimed at giving large social systems -- and indeed society itself -- more rational and coherent forms and functions. In this view, the long-term, systemic problems of health care, education, and the environment cannot be solved in small pieces. They must be taken on in whole."

In Schambra's view the policy approach goes back to the Progressive movement that, a century ago, tried to tame the tribal conflicts of democratic politics by applying "the new wisdom of the social sciences to the art of government," and rising above the narrow and the parochial.
Unfortunately the Progressive approach does not work.  That's what Schambra argues, and what Broder dimly understands when he writes:

Obama, budget director Peter Orszag and health czar Nancy-Ann DeParle grasp the intricacies of the health-care system as well as any three humans, and they could write a law to make it far more efficient.

But as soon as their rational plan hits the Congress it gets torn apart by special interests and factional rivalries.  Reality is not quite as rational as Obama and his czars want to think.
It's good that David Broder has finally come to the party.  Conservatives have been trying for at least half a century to teach liberals that the one-size-fits-all model doesn't work.  It was 1944 when F.A. Hayek argued this in The Road to Serfdom.
In the dim light of dawn, Broder prudently shelters his readers from the full force of Scharma's argument.  Obama is bound to fail, according to Scharma, just like Jimmy Carter and Bill Clinton.

Our constitutional system is constructed on [an] understanding of the limits of reason and of the goals of politics. Every effort to impose the policy approach upon it has so far ended in failure and disappointment, and done much lasting harm.

Let us rehearse the conservative critique of the "policy approach" to government:
If that is all too complicated, here is the issue between conservatives and liberals in a nutshell.
From Daniel Henninger quoting Victor Fuchs: "Every time the state assumes an additional function such as health insurance, child care or benefits for the aged, the need for close family ties becomes weaker."  You get charts like this: 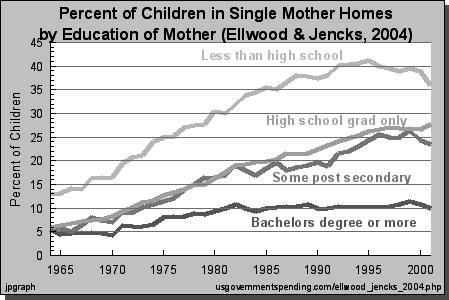 The chart shows that Fuchs' statement is not strictly true.  It needs a qualifier.  With each government program "the need for close family ties becomes weaker," starting with the poor.  The problem with rational, systemic liberal government is that it hurts the poor first and hardest.  When 40 percent of children born to high-school dropouts do not live with both parents, there is only one thing to say.  This is wrong.
For conservatives, Barack Obama's career in "the non-profits, advocacy coalitions, and foundations" of Chicago, his faith in policy professionals and social science all symbolize the failed liberal experiments of the last century.  To liberals like Cass Sunstein, Obama may be an "'anti-Bush' from whom we will see ‘a rigorously evidence-based government.'"  To conservatives, Obama represents fantasy-based government.
What liberals fail to see is that their cozy world of non-profits, advocacy coalitions, and foundations is utterly self-serving and corrupt.  It is a world in which rigorous evidence and big money are passed from insider to insider in a derivatives trading scheme.
Some day, a conservative activist is going to figure out how to explain this to the American people.  Maybe his name is Andrew Breitbart, and he already did.
Christopher Chantrill is a frequent contributor to American Thinker. See his roadtothemiddleclass.com and usgovernmentspending.com.  His Road to the Middle Class is forthcoming.
|