Race profiteers are the true enemies of black America

In my youth, I lived a wild and crazy life; drugs, women and partying, basically 24/7. Scholarships permitted me to attend art college where I hung with hippies. While the hippies preached peace and love, most were extremely angry at America.

There I was, a black student from the ghetto of east Baltimore, who could not figure out what these spoiled white kids from well to do families were so p-o-ed about. However, their philosophy was free love and drugs. So, I said, "Right on!"
I grew weary of my lifestyle and asked God to help me. He did. I was so excited about my new life, I wanted to share the good news of Jesus Christ with everyone. This led me to join a prison ministry; talk about a "captive" audience.
I was sadden and stunned by the large number of young black men in prison. Many were bright and gifted in many areas. Yes, they had "issues". Catastrophically, their biggest problem was their negative attitudes and beliefs about America. Black America's victim mindset and negative view of their country are great contributors to their inability to fit comfortably into society. 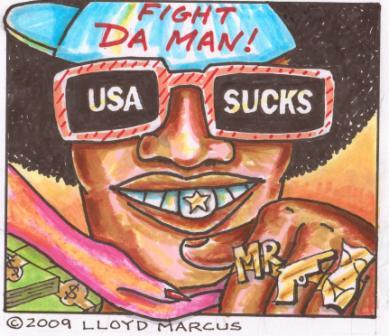 While race profiteers are not totally responsible, I believe we all choose what we want to believe, and they have misled many into a belief that limits and hurts them in the long run.
I give you this tale from my youth.
We were three black boys, gifted artists from the ghetto of Baltimore. I met Dave and Joe, both talented artist/sign painters when I was hired for the summer at Moe Canale Sign shop downtown across the street from world famous Lexington Market. My job was silk screen printing signs.
Joe and I were students at the Maryland Institute College of Art. I was a freshman, Joe was a year ahead of me. Dave rejected college. He was extremely street wise and thought college was a waste of time. Dave and Joe learned their sign painting craft at Carver Vo-Tech from their mentor, a black teacher named Mr. Lindy Jordan. They both held Mr. Jordan in high regard.
Our employer, Moe Canale was a generous jovial Italian. A good man who treated us well. Moe's personality reminded me of "Fezziwig", in Dickens' "A Christmas Carol". Whenever a pretty girl passed his sign shop's bay window wearing a mini shirt, Moe would say to us, "Man! Those legs go all the way up". We would all have a good laugh.
Hands down, Dave was the most talented amongst our Three Musketeers band of artists; extremely charming, witty and fun to be around. He kept us laughing. Unfortunately, Dave had a dark side. He viewed Moe, our employer, as 'the man' or 'whitey' and had no conscience about stealing from him. It was the 70's and many young blacks were militant against America and white people.
Dave stole Moe's coin collection. Surprisingly, Moe forgave him. On another occasion, Dave broke into Moe's desk and wrote himself a check. When Moe found out about it, Dave said he had an emergency and it was only a loan. Moe graciously fired Dave rather than pressing charges against him. As I said, Dave was extremely likable and charming. Remarkably, a few months later, Dave convinced Moe to rehire him.
Joe and Dave were a little older than me. I looked up to Joe like a big brother. My intact family, mother, father and three younger siblings moved out of the Baltimore projects to a black suburban community. Coming to Baltimore city to work and attend college was exciting.
Joe, like Dave, lived in the ghetto. Joe's dad left when he was 5. And also like Dave, Joe had his juvenile run-ins with the law. At 16, he spent a year in jail. When Joe returned home, he learned that his mom had suffered a nervous breakdown and was institutionalized. Joe went to live with his grandmother. He thanks his grandmother and Mr. Jordan at Carver High for setting him on the right path.
I admire Joe because he thinks for himself, is a self starter and a no excuses guy. Once we worked on a college project together. My assignment was to find a special type of paper. I whined to Joe, "I've looked EVERYWHERE and can not find it! Joe asked, "Have you looked here? Have you looked there"? I shyly said, "No". "Well then, you have NOT looked everywhere", replied Joe. Though I was annoyed, I knew his was right. That was typical Joe.
After college, I became a Graphic Designer. I landed a job at an ABC affiliate TV station, and was later promoted to supervisor and enjoyed a successful award-winning career. Joe graduated college, worked his way through grad school and became the first black Art Director in a prominent Baltimore advertising agency. He founded scholarship fund in the names of his grandmother and Lindy Jordan, the black teacher who mentored him. Joe is currently a college professor. We've stayed in touch over the years. A few years ago, I asked Joe about Dave.
Joe said the last time he saw Dave, it broke his heart. Dave was addicted to drugs, mentally diminished and looked like a homeless person. I thought, "Wow, Dave was the MOST gifted of the three of us."
Life truly is all about choices. Dave thought he knew it all. He was filled with anger and bitterness against an imagined enemy committed to keeping him down. Meanwhile, Joe and I simply pursued our dreams.
Still today, despite the election of America's first black president, "race profiteers" are still selling their "America is racist and whitey is out to get you" rhetoric." Their goal is to birth another generation of entitlement minded victims seeking reparations. They can not allow "the truth" that America is the land of limitless opportunity for all, to dismantle their lucrative race industry.
Joe and I loved Dave. He was incredibly gifted, fun and exciting to be around. Tragically, Dave chose to embrace the negative entitlement victim rhetoric. In the end, it destroyed him.
Lloyd Marcus, Singer/Songwriter of the "American Tea Party Anthem" is President, NAACPC (National Association for the Advancement of Conservative People of Color), and star of the Lloyd Marcus Show on YouTube.
|