Warning: mysqli_free_result() expects parameter 1 to be mysqli_result, bool given in /var/www/html/americanthinker/admin/common/functions/func.general.php on line 126
 My Global Warming Epiphany - American Thinker
|

Global warming is a complicated subject.  It therefore takes a lot of hubris or ignorance to think you can explain either the "for" or "against" case in a few hundred words.  But I stumbled onto some data that meets my "keen grasp of the obvious" threshold for understanding.

Recall that we really need to answer "yes" to four separate questions before we join the Al Gore religion of "sign the treaty immediately or we will all die."
(1) Is the globe getting warmer?
(2) If so, is man doing it?
(3) If so, is it bad?
(4) If so, is the massive-reductions-in-CO2 approach the best way to deal with it?
You might have seen such questions before, but they frequently get mixed up in public discussions.  For example, some people imply that if the answer to (1) is "yes", then the answer to (4) must be "yes" as well.  If the temperature graph is going up, destroy your SUV.  Or at least switch light bulbs.
However, Bjorn Lomborg thinks the answers to (1) through (3) are "yes", but that the answer to (4) is "no."     He once challenged Al Gore to debate that fourth question alone.  But Mr. Gore treated Lomborg as he would any other global warming skeptic or "denier", comparing him to tobacco companies of old and lecturing him about arctic ice caps and sea levels.
I am not only stuck on question (2), I'm stuck on question (1).  I've seen graphs of temperatures, such as the so-called "global" temperature.  The UN's Intergovernmental Panel on Climate Change, for example, presents such a graph in its "Summary for Policy Makers."  While this graph does present to the eyeball a rising trend, one could ask several questions.

If the warming trend were stark and obvious, the questions above would be less important.  But one degree in a century?  I can't feel one degree.  I can't find two thermometers that agree that closely.  The temperature regularly changes by 20 degrees or so every day where I live.  On any given day at any given time, temperatures on the earth differ by more than 100 degrees F.  What is signal and what is noise?
Like I said, this is complicated.  But I am willing to accept, as have most scientists including "skeptics", that the "global" temperature went up about one degree in the last 100 years.
That still doesn't answer question (1):  "Is the globe getting warmer?"  Unstated in the question is some sense of time scale.  Warmer since last year?  Since last decade?  Since last century?  Is it a relentless and significant upward trend imposed on minor cyclic deviations?  (Answer key:  No.  No.  Yes.  And that's what James Hansen says when his muzzle is off.)
Frankly, I've seen stock market charts that look an awful lot like the IPCC temperature chart.  It sure looked like the stock price was trending up relentlessly when I bought it.  After that, not so much.
If I leave things at that, I'm confused, but at least find it plausible that average temperatures around the globe are going up.  All based on graphs that vary within fractions of a degree over decades and centuries.  (Plus arctic, but not Antarctic, ice sheet extent; polar bear counts in some regions, but not others; some glaciers shrinking, but others growing; more hurricanes some years, fewer in others; etc.  You know, all that rock-solid evidence of one degree of global temperature change per century.)
But here's where the global warmists came to my rescue.  They tell us that warmer temperatures lead to higher sea levels.  Fortunately, there is only one ocean.  And while sea levels vary with tides over the year, averages are probably fairly reliable.
As it happens, the IPCC does present a chart of sea levels and its trend is more obvious than the temperature trend.  It shows a steady rise of about 200 millimeters in the last 120 years.  That's about eight inches.  Is eight inches over 120 years significant or alarming?
Better yet, and here is where I got my epiphany, scientists have produced a long-term graph of sea level changes, about 20,000 years worth.  The graph below was taken from Wikipedia, but the data behind this graph are widely known and accepted.  NASA, for example, accepts this data and the government of Canada publishes a similar graph. 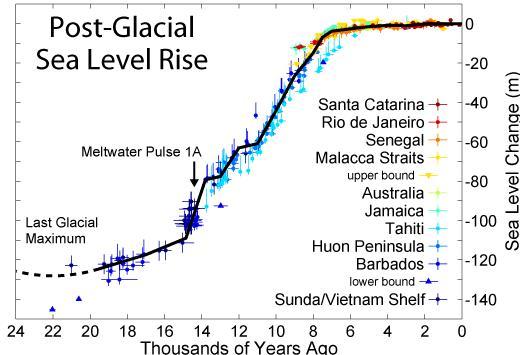 First, look at the vertical scale.  It ranges over about 120 meters (not millimeters), about 400 feet.  On the page you see this graph, a change of 200 millimeters (or the change in the last 120 years per the IPCC) would be would be about the width of your eyelash.  When the seas were 400 feet lower, people could walk from Russia to Alaska and from France to England.
We engineers have a saying: measure with a micrometer, mark with chalk, cut with an axe.  That saying is meant to put things in perspective for young engineers who like to calculate things out to the number of digits visible on their calculators.
Global warmists are taking their micrometer, literally, to the last 120 years on this chart, an area that would probably fit in the upper rightmost dot on that chart.  And from that, extrapolating that we are all about to die.
I no longer need to squint my eyes to see a one degree per century trend in a cloud of noisy data.  The trends are stark.  Thus, my epiphany.
If sea levels go along with global temperatures, as the warmists frequently remind us, then this chart makes blatantly obvious that

How can you blame man for sea levels rising when about 99% of that rise since the last ice age occurred before man built the pyramids, much less SUVs?  A rise in sea level over the last century should not be surprising; it's been rising for the last 20,000 years.
If anything, looking at this chart would convince me that long term temperatures are cyclic and that we are coming near the end of the warming part of the cycle.  In fact, it looks like we are near the peak of that warming and could be about to enter the cooling-down part of the cycle.
Over the time of the chart above, man did pretty well.  His population grew from fewer than 10 million to almost 7 billion.  He had an agricultural revolution, an industrial revolution and an information revolution.  He started cities.  He started writing.  He started recording his own history.  He walked on the moon.
Over that time, the sea level rose about 120 meters.  If the current trend continues, it will rise two meters in the next 1000 years.  If man thrived like he did when the seas rose 120 meters, why would the world end if they rise another two?
Our global warming "engineers" seem eager to move to the final stage of their project: cut with an axe.  Something's about to get capped all right, and not just your CO2.
Randall Hoven can be contacted at randall.hoven@gmail.com or  via his web site, kulak.worldbreak.com.
|