Warning: mysqli_free_result() expects parameter 1 to be mysqli_result, bool given in /var/www/html/americanthinker/admin/common/functions/func.general.php on line 126
 The Democrats' Magic Bullet - American Thinker
|

Not that many people are aware that Arlen Specter was the staffer who developed the Warren Commission's "magic bullet" theory. The Democrats, with Specter's announced shift from the Republican Party to the Democratic Party, now have their magic bullet to ensure that Barack Obama gets what he wants in his first two years in office: healthcare reform, climate change legislation, and appointments to his Administration and to various federal courts.

So far, there is every appearance that the Democrats are welcoming Specter with open arms, and attempting to clear the field for him to be the Democratic nominee in Pennsylvania in 2010. Suburban Philadelphia Democratic Congressman Joe Sestak had his eyes set on running for the Senate seat in 2010 and has not agreed to roll over (yet), but Specter would be favored to win if there were a Democratic primary, and if President Obama and Democratic Senators from around the country helped him raise money and campaigned for him.
Of course, Specter's move was very cynical.  If Specter could win the GOP nomination in 2010, he would have been a favorite to win re-election to a 6th term. But it was highly unlikely that he could beat former Congressman Pat Toomey in a rematch of their 2004 primary race, when Specter slipped by with a 2% victory. Toomey led by 51-30% over Specter in a recent poll. As moderate Republicans have switched their registration to the 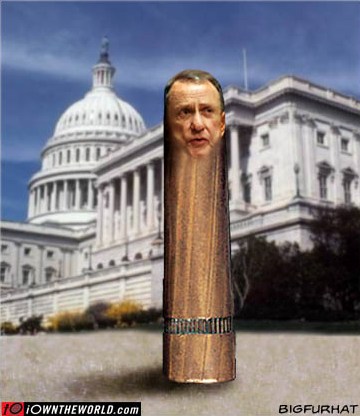 Democratic Party in recent years, the GOP in Pennsylvania has become more conservative. Toomey, if nominated, would almost certainly  have been defeated by whichever Democrat ran against him -- Sestak or somebody else. The state has become much less friendly to Republicans the last few years. Rick Santorum, a principled conservative, lost his re-election fight by 17% in 2006. Barack Obama carried the state by just over a 10% margin in 2008. The GOP has lost five Pennsylvania House seats.
So the question arises, why would the Democrats roll over for Specter, when it was very likely they would pick up his Senate seat next year anyway,  running against Pat Toomey, who would have defeated the only electable "Republican", Arlen Specter in the primary?
The most likely reason is that Specter will give them the key vote this year to enable the Democrats to overcome any GOP opposition through a filibuster on major initiatives that Barack Obama wants to get through quickly.  Specter becomes the 59th Democrat. Sometime later this year, Al Franken will be the 60th Democrat in the Senate, seated after overcoming the last of Norm Coleman's appeals. Few people who have watched the post election legal battles think Coleman has much of a chance of winning on appeal.
There are several battles Specter will now help the President win:

Of course, Specter could deliver all these favors to the Democrats, and once booked, they could still screw him next year, and not play the decisive role Specter is counting on to beat back any challenger in a Democratic primary.
That would be poetic justice, of course, and it would show that the Democrats had one magic bullet left.