I drove by a Protestant church recently that had the following moral exhortation on their lawn marquee:

"Saving the world, one light-bulb at a time."

Wow!  Talk about a test of faith.  Don't think you're going to slide through the gates of heaven without renouncing Satan's bulbs -- not a chance!
Later that week a Liberal friend asked me, "Do you believe in global warming?"  As I contemplated my answer I was struck with conflicting images - a Senate sub-committee, and a child asking about Santa.  To his credit, he stuck with me through my multi-part response.  To wit:
I asked what brought all this to mind.  In short, why the long face?
What followed was the standard global warming litany: Crop failures, rising tides, malaria in Vermont, people dying of heatstroke during the endless summer, etc., etc., etc...
I countered each point with one of two arguments:
At some point along the way I realized I was making him angry.  It wasn't that I was being abrasive or disrespectful.  I was responding point by point to each of supposed global warming calamities.  "We can fix all this stuff now," I said.  "No need to give up your SUV, no buildings underwater, no tribes of cannibals living in the burned out skeleton of Baby Gap."  This should be good news, correct?
That's where you'd be wrong.  The thing you need to realize is that all these supposed outcomes are a smokescreen.  Most global warming activists don't really care about people being fed or preventing malaria.  If that's what they were concerned about they would focus on that.  Trying to address world hunger by worrying about CO2 levels is about as direct as trying to become a famous actor by waiting tables in a Hollywood restaurant, (actually that may be a little too pessimistic but you get the picture).
The "science" of global warming is nothing more than a cover for their irrational emotional needs.  It's religion for people who are too cool to go to church.  All that yearning, the need for something bigger, transcendent: Hey the planet's heating up and I've been placed here to save it!
When Al Gore says, "The Earth has a fever," no one calls him on his cartoon personification -- as if the Earth has a temperature it prefers.
Compare this to GW's comment that Jesus Christ was his favorite philosopher - "Oh what a sad misguided fool.  He still believes in God.  And this is the guy who's running our country?"
To borrow a phrase, (as I have liberally in this post), from the brilliant statistician and eco-philosopher, Bjorn Lomborg, visualize the people living on Earth 100 years from now.  Let's imagine that they can reach back in time and speak to us, give us some feedback on the world we'll be leaving them.  What do you think they'd ask us to focus on?  Where would they have us concentrate our scarce time and energy?
A world in which hunger and AIDS have been eradicated or  a world where the sea level is 6 inches lower?
A world free of Jihad where everyone lives under some form of representative democracy, or a world that is 2.1 degrees cooler in the months between October and March?
A world with 10% more polar bear habitat or a world where even the poorest or the poor have clean water and a sanitary place to go to the bathroom?
These are our choices.  We can't do everything.
And frankly, to hear people who are so wealthy that they're clinically obese from excess food and leisure time yammering on about what kind of light-bulbs they use, while other people are literally starving to death...  It's beyond bizarre.  It speaks to a frightening level of self-deception that seemingly intelligent folks engage in en masse.
Which brings us back to the church I saw.  Is this what passes for morality today?  Is this what constitutes a courageous stand?  Is this honestly the best we can do?
Do you know how much the sea level rose since 1850?  1 foot.
And what did we do?  How did we handle this catastrophe?  Well, actually, we didn't notice that it was happening -- that's how horrible the climate change we experienced was.
Do you know how much the UN's IPCC panel predicts the sea level will rise by 2100?  One foot.* It may be the same nightmare we went through last time. Or maybe half the nightmare.
So next time you fret about whether your car is Gore compliant or if you're protecting your precious Gaia by buying carbon offsets for your private jet, think for a minute about how it would look to our friends a hundred years hence, or better yet, to a little kid in present-day Africa or Asia who's starving to death.
Maybe we ought to return to an elemental truth the folks a hundred years in our past knew clearly and without reservation.
People come first - the Earth can take care of itself.
* Projected sea level rise in 21st century: 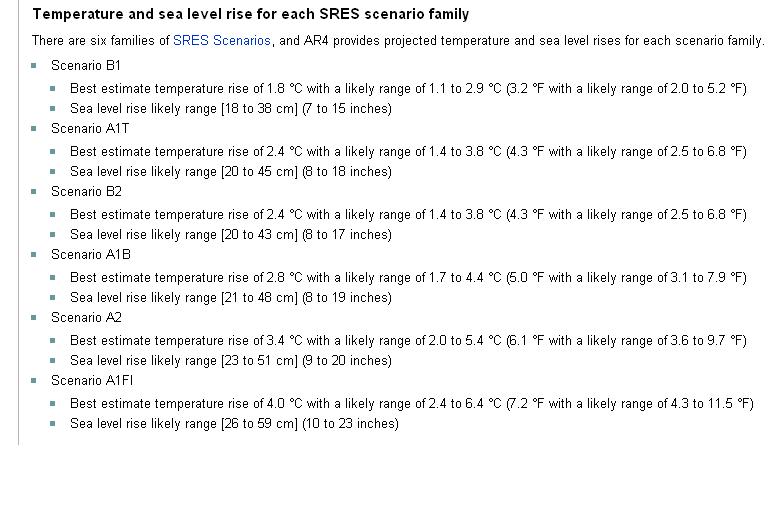 This shows different ranges of sea level rise predicted using 6 different scenarios, (coolest to warmest).  It's worth noting that the "high-end" scenarios are probably unrealistic in that they factor in "business as usual" with no switch to alternative fuels, conservation efforts as a result of price, etc., (many of which are actually happening now due to the increase in the price of oil).  If we take the mean of each range we get, (coolest to warmest):