Warning: mysqli_free_result() expects parameter 1 to be mysqli_result, bool given in /var/www/html/americanthinker/admin/common/functions/func.general.php on line 126
 A Century of Taxes - American Thinker
|

A Century of Taxes

I was talking with a liberal friend recently over some convivial post-theater refreshment and the question of privacy came up.

What do you mean, I asked?  What privacy?  I just sent in my Federal Income Tax return for 2007 and I reckon that the government already knows everything about me.  For 2007 Uncle Fed knows how much I earned in wages, in interest and dividends, and in the proceeds of any stock and mutual fund transactions.
Unless I was interested in "paying for a woman to go away" or indulging in a little innocent revolutionary activity in the suicide-bombing line, what else would the government want to know about me that it doesn't already know?
I'll tell you what, I told him.  If we want to get serious about privacy, let's start with abolishing income taxes.  Personal income taxes require, by their nature, that the government knows everything about its citizens' financial affairs.  When liberals are ready to abolish the income tax then we will know that they are getting serious about privacy.
Everybody complains about taxes but nobody does anything about them.  For instance, take a look at taxes over the last century.  Yes, you can go to usgovernmentrevenue.com and click up a chart that tells the whole dismal story. 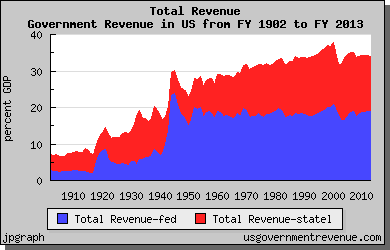 The chart shows the innocence of the United States a century ago when good old J. Pierpont Morgan was solving the 1907 banking meltdown.  In those days bankers were as foolish as they are now. F. Augustus Heinze and his brother thought they would use the money from their bank to finance a nice little corner in copper shares.  They nearly brought down the whole financial system when their brilliant little plan went south.
Look at the government revenue in terms of GDP. 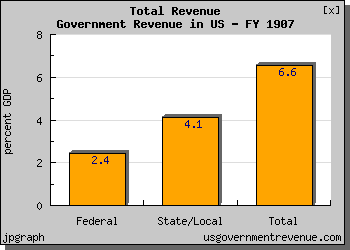 Federal revenue at 2.4 percent of GDP?  Talk about living in Arcadia!
Unfortunately in the aftermath of the Panic of 1907 (now a book by Robert F. Bruner and Sean D. Carr) so brilliantly solved by J.P. Morgan, wise heads decided that this sort of thing must never happen again.  The United States needed the security of a formal central bank.  The idea of the "Money Trust" solving a financial crisis in J.P. Morgan's high-ceilinged library with the help of Morgan's exotic African American librarian Belle da Costa Greene was clearly repugnant to all rationally-minded people, or so they thought at the time.
So the United States got an income tax and a Federal Reserve System just in time to finance World War I.  Federal government revenue went to 8.4 percent of GDP, mostly on the strength of the new personal and corporate income taxes.
When the next financial crisis appeared in 1929 the United States had a fully functional central bank in place, ready to fall asleep at the switch.  Maybe if the first Governor of the New York Fed, Benjamin Strong, Jr., had not died in 1928 all would have been fine.  Strong was one of the rising young men who assisted J.P. Morgan in the 1907 crisis.
Look at what happened on the revenue front when the nation collapsed into depression in 1929-1933.  Government revenues went up!  Federal revenues went up from 4.14 percent of GDP in 1929 to 5.78 in 1933.  But state and local revenues went through the roof from 8.83 percent of GDP in 1929 to 13.36 percent in 1933.  The chart tells the story: 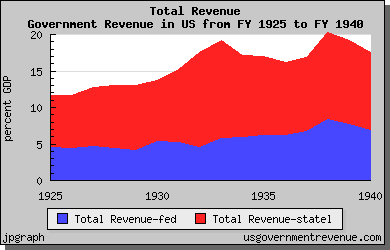 That is what you call raw talent:  Raising taxes in a depression.  No wonder the folks on the Great Plains revolted when they had to sell their farms to pay their property taxes.  See for yourself. Create the chart at usgovernmentrevenue.com and look at the numbers.
Let's return to the first chart.  Do you notice something rather surprising?  Federal revenue has been pretty constant ever since the 1950s at about 17 to 18 percent of GDP, except for the last year of the Clinton administration when it reached nearly 21 percent.
The real growth in taxation in the last half-century has been at the state and local level.  State and local receipts have doubled from about 8 percent of GDP in the mid 1950s to a peak of 17 percent in 2000 and 2005.
Here we are all getting riled about about our federal income taxes when it turns out that federal taxes aren't the problem.  It's the state and local taxes that are killing us.
Just what are we getting in return for all these government taxes and revenue?  It's a good question to ask your liberal friend some time.  For answers you can't do better than usgovernmentspending.com.  If we could reduce the size of government, maybe we could help our liberal friends get the privacy they want.
Christopher Chantrill is a frequent contributor to American Thinker. See his roadtothemiddleclass.com and also usgovernmentspending.com. and usgovernmentrevenue.com.  His Road to the Middle Class is forthcoming.
|