Where the Sightseeing Bus Won't Take You

The holiday season provides a welcome opportunity to get away from the computer screen and explore some of the more obscure vantage points for photographing the stunning geography of the San Francisco Bay Area. Instead of the more serious analytical fare customary for this website, what follows is a series of pictures taken in my exploration of the maritime infrastructure of the East Bay.

A subtantial portion of the consumer goods opened as Christmas presents yesterday came in by ship from Asia. And a share of those came in through the ports of San Francisco Bay.Although San Francisco is world famous as a port city, very little cargo moves through it today. When containerization revolutionized the ocean transport business, San Francisco largely opted out. Many of the old piers lining the city's prime waterfront are either rotting, or the objects of developers. A few have already been turned to other use.

The Port of Oakland invested heavily in containerization, and now is by far the dominant port along the shores of the Bay, with other smaller ports like Richmond also participating as specialty terminals for such goods as scrap metal, oil and chemicals, and cars.
Here is a holiday tour of some of the places tour busses never go.
Thomas Lifson, editor

When we think of the inventions which have revolutionized life in the past half century, the mind turns to microelectronics and software. But a strong case can be made that an amazingly simple device, the shipping container -- a metal box -- has had an equally profound impact. By vastly reducing the amount of labor, pilferage, and handling time, containerization has drastically reduced the cost of importing and exporting, and fuelled the world's sustained economic growth for the past fifty years. Without containerization, the world's economy would be quite different today, and much poorer.

A port official told me years ago that empty berths do not mean the port is not fully utilized. The ships are offloaded quickly, so they can sail on with no delay. Meanwhile, the containers are sorted and loaded on trains and trucks for further transport. 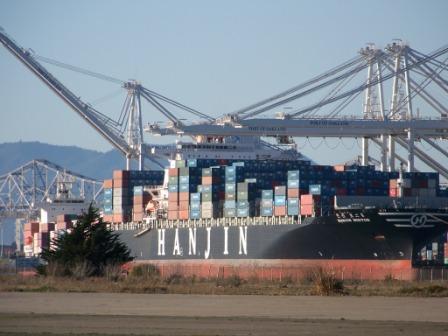 A ship this size can carry ten times or more the cargo handled by a World War II Liberty Ship. They sail a lot faster, and carry a smaller crew. 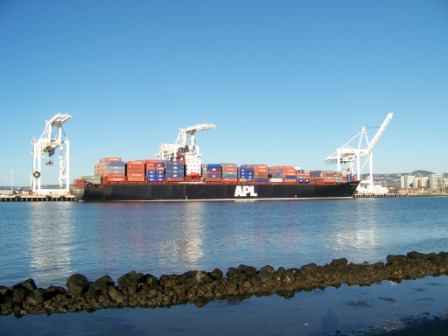 The men and women who operate these container cranes are a far cry from the stevedores of the old days. In place of cargo hooks, they use the complex machinery of these cranes, and must operate with great precision. They sit up high in airconditioned cabs and earn very good pay, too, for a strike can cost the port and shipping companies huge amounts of money. I am told that with overtime, six figure incomes are not uncommon. No college degree is needed, either. 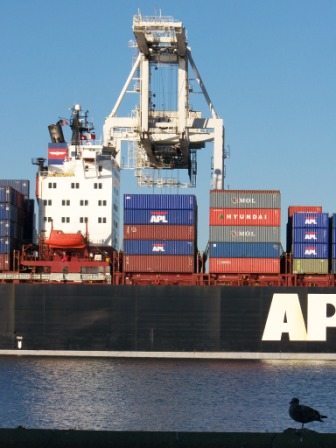 Oakland still has a couple of piers using the old fashioned "break cargo" cranes, which pull nets full of goods out of the holds of old pre-container ships. They don't get much use. 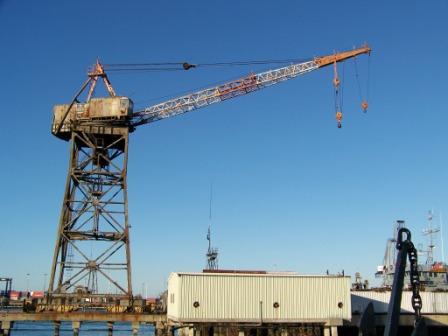 Lots of other kinds of cargo moves in and out of San Francisco Bay. For example, automobiles. Here is a car loading and unloading facility in the Port of Richmond. Ironically, it stands on the site of Richmond Kaiser Shipyard Number 3, where Liberty Ships were mass-produced. Now, it imports cars from Asia (mostly Korea), and actually ships out a few export vehicles as well. In  the future, I intend to write about and photograph the Kaiser Shipyard in further detail. In the background you can see the bow of the Red Oak Victory, one of the few surviving Liberty Ships. 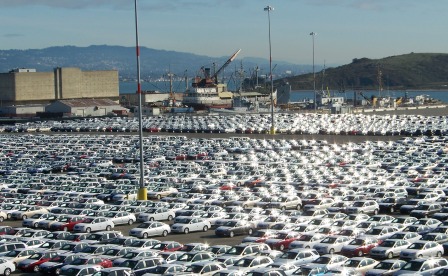 Of course, to power these and other vehicles, oil is necessary. Below is a tanker nearly completely unloaded at one of the oil port facilities serving the Chevron Oil Refinery in Richmond, California.

Finally, when the autos are worn out, they are converted into scrap. A large portion of this is exported to mills in Asia. Below are two ships in the Port of Richmond harbor, one carrying oil and chemicals, and the other one, on the right, loading up with scrap metal.

Thomas Lifson is editor and publisher of American Thinker
|