NH Democratic debate: What planet do these people live on?

Unlike most Americans, I tuned in to the New Hampshire Democratic debate, the drumroll finale from George Stephanopoulos asking each of the last seven candidates standing what they'd do about childhood poverty.

Not exactly a burning question, given that childhood poverty rates have collapsed under President Trump.

Nevertheless, they all flunked.  In seven different ways, each leftist Democrat demonstrated some kind of disconnect from reality, in the end making one wonder which asteroid they lived on.

They started with Andrew Yang, who quickly reached for the $1,000-a-month shtick for single moms.  As if that hasn't been tried since the War on Poverty was introduced in the 1960s and didn't make things worse, replacing dads with government cash.  Apparently, he's never heard of it.

They then moved on to Pete Buttigieg, who wanted us to know that we were living in a deep, deep depression, with only the rich, and "people whose names were on buildings," making any money in this terrible Trump economy.  Forget those good economy claims, actually — only the stock market is rising, and the rest of us are starving.  The job formation, the raises, the new companies, the fattened 401(k)s don't seem to exist in his fevered imagination.  According to Pete, whatever was going on good in the economy was going to the stock market, the coupon-clippers, all the bad guys the progressives were talking about in 1870, and nobody, of course, with a 401(k) had any stake even in those stocks.  Buttigieg is living on the far planet from this bunch.

Elizabeth Warren was next, touting her experience teaching special ed kids, coming up with the usual leftist spiel of throwing more government money at the problem.  "I talked before about a two-cent wealth tax.  But the whole idea behind it is we can do early childhood education and good quality childcare, universal pre-K for every child in America," she said, throwing in big raises for the bureaucrats and teacher union members, of course, all in the name of "investing in our children."  It was loony stuff, because how many times has she pledged that two-cent tax of hers for other stuff, for everything under the sun, actually — free health care, free college education, free everything?  Now it's free childhood education?  There aren't enough billionaires to pay for even one of those free-for-all programs, and there she goes again, pledging those two cents to somewhere else.  Memo to Fake Indian: You can spend the wampum only once.

Then we got into the grotesque, with Joe Biden, who didn't really care about the childhood poverty question, just persuading us that far from being the rich, privileged swampster who's done well on the Beltway corruption rackets, with all those relatives he's made rich, he's really himself just poor starving Joe, advocate for the little guy, describing his childhood as one of layoffs and smokestacks, his dad a poor hardhat who was always getting laid off.  Joe didn't care about the childhood poverty question; he just wanted us to know he wasn't a rich, corrupt swamp thing who'd grown rich in public office.  Creepy Joe's planet is another distant one. 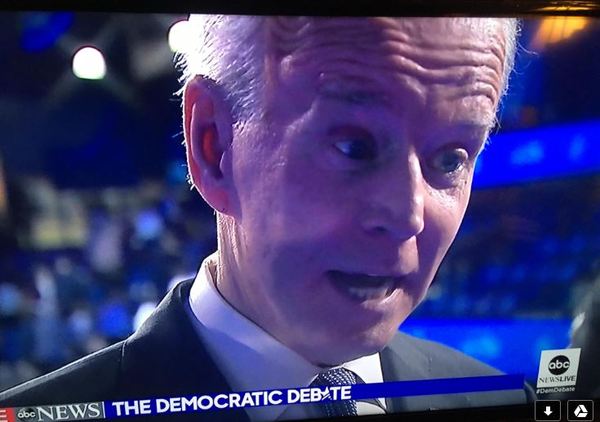 Screen shot from a camera at a television.

More weird came from Bernie Sanders, who argued that childhood poverty was the result of President Trump's tax cuts for billionaires. It was "the same reason that we give massive trillion-dollar tax breaks to the rich and large corporations, same reason we give tens of billions in subsidies and tax breaks, while half of our people life paycheck to paycheck..."  So tax everyone to death, and no more childhood poverty — got it?  Just ask Venezuela how that worked out.  Bernie Sanders is truly on some other planet with that one.

Amy Klobuchar was no better.  She spoke of Democratic defeats, talking of how Democrats apparently had no idea what normal people wanted, which is why they were out on their ears.  Then she went into an anecdote about Franklin Roosevelt's funeral, saying a weeping man said that though he didn't know Roosevelt, "he knew me.  He knew me."  This rather sounds like President Trump, actually.  Talking about how Dems have been out of tune with voters and then saying Trump was the one who was out of tune, while she was presumably in tune, was the height of funhouse mirror world.  Put her on another planet, too.  That's how you got Trump, lady.

Tom Steyer was all over the place at the end, pandering to every interest group, wheeling it all back to global warming, his crank cause.  Planet Tom, there he was.

None of these Democrats had the slightest grasp of reality.  Even the most basic of them, the tax-and-spend money-shovelers, were out of tune with reality.  Some of their ideas were old, very, very old, and failed, to boot.  Others simply wanted to project an altered reality.  After hearing all seven of these wrong answers, it's pretty clear the party is on its own asteroids, floating around in the nothingness, clueless as to why America elected President Trump.

These constant misses are what doesn't resonate with voters.  It's a pretty good clue that they're all about to go down in flames come November.