« Was Obama stoned during Bob Costas interview? | Sochi Gets a Visit from the La Taxa Nostra »
|

Victor Davis Hanson on our 'path to Armageddon'

Historian Victor Davis Hanson recently gave one of the finest and most memorable presentations on the subject of immigration.

America could be on "a path to Armageddon," given the blend of relativism, racial preferences, and nullified immigration laws, warned Hanson in an interview with Mark Levin, [link opens in pop-up, interview begins at 51:00].

Hanson is a military historian who taught the classics and is now a Senior Fellow at Stanford's Hoover Institution. Winner of the prestigious National Humanities Medal (2007) and the Bradley Prize (2008), his writing is generally seen as well reasoned and insightful. 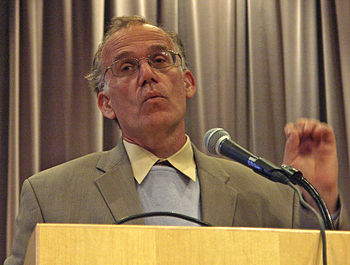 Hanson offered a blistering attack on Republicans and left-wingimmigration policy, pointing out that Republican leaders have stopped using the word assimilation. Assimilation used to be the ideal that was strived for by immigrants and encouraged by our society. Instead of urging assimilation, some Republicans are bizarrely promoting amnesty for people who are not assimilating.

Hanson pointed out that many of today's immigrants are not repeating the pattern of the Italians or Greeks, as just two examples. While Latino studies programs can be found at almost all universities, one does not find such "studies" for Italians or Greeks. That is just one dramatic distinction between immigrants today and past immigrants.

Hanson lampooned Republicans for floating amnesty at a time when the executive branch is increasingly lawless. "I don't know why they would trust [Obama] after they told us not to trust him."

That's not the only ridiculous aspect of the pro-"legalization" approach. The timing of the proposal couldn't have been worse, and there were several better alternatives. The pro-amnesty GOP could have delayed the proposal, or only discussed enforcement, but instead took the most divisive approach at the worst possible time.

Aside from being incompetent, the amnesty effort is also futile. "The establishment thinks it will be better liked and it can appeal to so-called Latinos which are not going to vote for them anyway because now they are going to add the wage of being weak in addition to being considered illiberal," Hanson warned.

If the idea is to be liked by MSM, "we're going to lose every time by trying to be liked."

Rather than playing into his hands, Hanson suggested a response to Obama rooted in the concerns of the middle-class. The response should emphasize that "[t]his president favors the very wealthy liberal elite and he's creating a dependent culture for everybody on the bottom, and he does not care about the middle class. He finds the [middle class] without the romance of the poor and without the connections of the elite."

Instead of amnesty, the Republicans should be pushing for limits on immigration. Hanson suggests that we can take 100,000 legal immigrants per year, but we can't take one million per year, especially when they lack high school diplomas or English proficiency.

The "Destroyed" State of California

A Californian, Hanson has seen firsthand the fiscal, social, and educational problems stemming from illegal immigration. Illegal immigration is "the reason the state is destroyed," Hanson bluntly stated.

Hanson mentioned some astonishing facts about California's educational system. The state of California is ranked 47th in eighth-grade science scores. 40% of children are not fluent in English. 44% of incoming freshmen in the Cal state university system are not prepared for college-level English and math. Hanson points out that it is forbidden to notice that there is a cause-and-effect relationship between illegal immigration and these woes.

California, as a state, serves as the shining example of what happens under lax enforcement of immigration laws. The state is going bankrupt. The Republican Party is going extinct. At their lowest level of registration since 1922, Republicans are 29% of registered voters in California, while Democrats are 44%. In the face of population changes of the type that have occurred, the Republicans can't modify, they can't adjust, they can only die out.

A Nation of Left-Wing Immigrants

Hanson took on the popular idea that immigrants are latent conservatives, especially on social issues. "You can be against abortion and Hispanic and vote for an abortionist if they're for big government."

"Its just a fantasy that's spun somewhere in Washington" he added, that Hispanics will be conservative for social reasons.

True conservative voters understand that "blanket amnesties" are "going to unravel the American experiment and its also going to empower the Democratic Party for 40 years."

Besides, any Republican effort to pander can be easily outdone by the Democrats. "Trying to outrace and outclass and outgender the Democratic Party is a losing proposition."

While they pander, the Republicans would be losing a core group of voters who do actually support them in large numbers. "Why is this leadership deliberately trying to estrange and alienate 70% of the people who will go out and vote?" Hanson asked.

Relativism, the "Path to Armageddon"

There are "sanctuary cities" that forbid local law enforcement from asking about immigration status or engaging with federal authorities. Hanson urged that Republicans should be seizing on this "nullification" of federal law, to illustrate the left's hypocrisy and recklessness. Even convicted violent felons have been harbored by cities like San Francisco, where one violent felon who should have been deported went on to murder a father and two of his sons.

Legalizing illegal immigration, Hanson said, "erodes the entire fabric of the law. It says, I can pick and choose which laws I want to follow. And once you go down that slippery slope then anyone can do it." He pointed to the "racial context" of amnesty, which combines pandering and relativism to create a disturbing left-wing policy:

Everything depends on the social context, the economic context, the gender context, the racial context, whether its right or wrong, or true or false. I just think historically that's just a path to Armageddon as far as I'm concerned. [italics added]

John Bennett (MA, University of Chicago, Master of Arts Program in the Social Sciences '07) is a writer whose work has appeared in The Daily Caller, Townhall.com, World Net Daily, Human Events, Accuracy in Media, and FrontPage Magazine, among others. He has been a featured guest on the Laura Ingraham, Lars Larson, and Rusty Humphries programs. Follow @Jthomasbennett