"Don't leave money on the table," Michelle Obama told students at T.C. Williams High School in Alexandria, Virginia this week, seeking to put as many people as possible on the receiving end of a government check. Nothing builds the Democrats' voter base faster than the widespread ability to raid other taxpayers for support.  How widespread?

"Almost everyone is eligible for some form of financial aid, and all you have to do to access that aid is fill out this one little form. It's so simple." 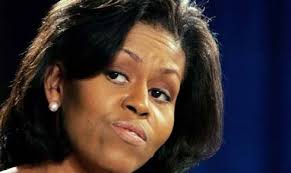 Simple, as in one-stop shopping, all the better to build that constituency for OPM (other people's money). Dr Susan Berry outlined the presentation on Breitbart:

"Through FAFSA [Free Application for Federal Student Aid], the Department of Education provides more than $150 billion every year in low-interest loans, in grants that you don't have to pay back, and work study programs that can help cover your educational expenses," she offered. "And I was a work study student all throughout college."

Of course, some of that financial aid comes in the form of student loans, which do have to paid back. And unlike other forms of debt, these loans can't be discharged in bankruptcy. So those who heed the siren song of federally-subsidized debt may find themselves stuck with what the Democrats deride as "job lock" when it comes to praising the liberating effects of Obamacare subsidies.

Actually a federally-indebted generation offers plenty of benefits for the governing class. In an era when a (Democrat) president can choose whether or not to enforce any provision of a law he chooses (Oath of Office to "faithfully execute the laws" to the contrary notwithstanding), it is not beyond the realm of possibility that an Obama-like figure could selectively choose to forgive those debts, IF the debtor behaves according to the wishes of the ruler.

Underlying this push is the reality that higher education has become a plantation for the left, with professors indoctrinating students ideologically, and with plenty of political donations flowing to the Democratic Party out of those same campuses.  Getting the feds to subsidize the customers of the higher education industry with grants and loans, has permitted tuition increases at three times the rate of inflation, after all. One hand washes the other.

The fact that many majors do not prepare students for any useful occupation, and that many recent college graduates are unable to obtain jobs that actually need a degree and are competing with nigh school graduates is something the First Lady did not think to mention to the eager youngsters, who were being helped to fill out the paperwork for the federal teat even as she spoke.  Like drug pushers, the federal government is now prowling school yards, getting youngsters hooked young, so they can remain addicted to government money for the rest of their lives. Or at least until the feds run out of other people's money.