Warning: mysqli_free_result() expects parameter 1 to be mysqli_result, bool given in /var/www/html/americanthinker/admin/common/functions/func.general.php on line 126
 ID's required to attend NAACP rally to protest voter ID requirements - American Thinker
« Putin's Cat and Mouse game...and he's not he Mouse. | The Iranians are Coming! The Iranians are Coming! »
|

Call the irony police! The North Carolina State Conference of the NAACP is holding a rally to protest that state's new voter identification law, but participants are being advised to bring photo identification. Aurelius of Pundit Press discovered the advisory and comments:

In a flier entitled "Important Dos and Don'ts for Marchers!!!," the NAACP state at the top that all protesters conduct themselves "in accordance with the historic custom of the Civil Rights Movement." They should also listen to their "marshals at all times" and follow the "Dos" and "Don'ts" underneath the opening paragraph.

Some of the Dos are sensible for any rally, such as, "look out for the elderly and the young" and "wear a hat and very comfortable shoes" (emphasis theirs).

Then there are ones that are common sense that you wouldn't expect to have to tell people, such as "DO NOT intimidate, threaten, ostracize or degrade anyone," and do not threaten commuters.

In the middle of the list, however, is a drastically ironic "Do." To go to the rally, you are asked to have "photo identification (driver's license, passport or other valid photo id) with you and keep it on your person at all times."

Remember, this is a protest against needing a photo ID to take part in a fundamental responsibility of Americans... but to go to that protest, you are supposed to have an ID.

Here is a reproduction of the flier: 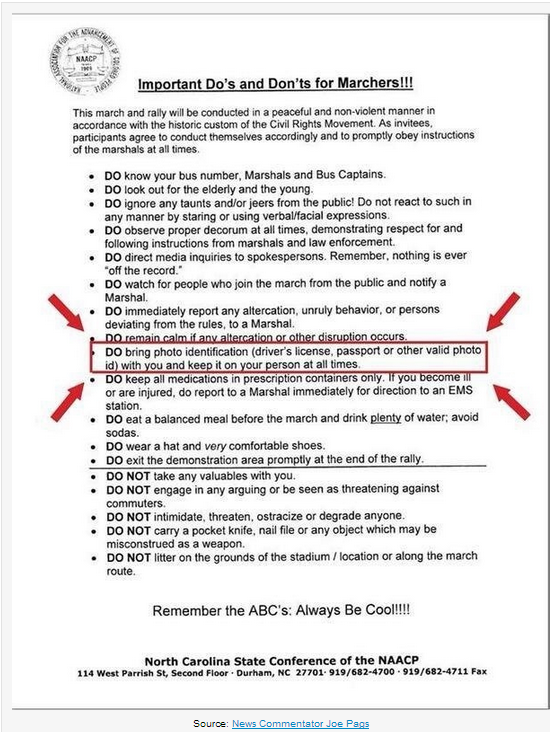 I have to wonder if the NAACP been infiltrated by agents of the Ku Klux Klan, who are bent on destroying the credibility of an organization formerly respected as an effective advocate for black Americans. They seem to have been at work for quite a while, because the NAACP has degenerated into a crude and self-parodying version of a civil rights group. This blatant hypocrisy would seem to be the capstone of the campaign.