Every day some place in the world has "wild weather." And in recent times, human industry gets the blame. "It's all caused by man-made global warming" (generally shortened to "global warming", or GW by alarmists).

If all of this were true, carbon dioxide is surely the most powerful and disruptive gas on the planet - a potential weapon of mass destruction.

But carbon dioxide (CO2) is one of the most stable, predictable, unreactive and puny of all climate factors. And its effect diminishes for each addition of CO2 to the atmosphere. Adding more now has almost zero effect on temperature. 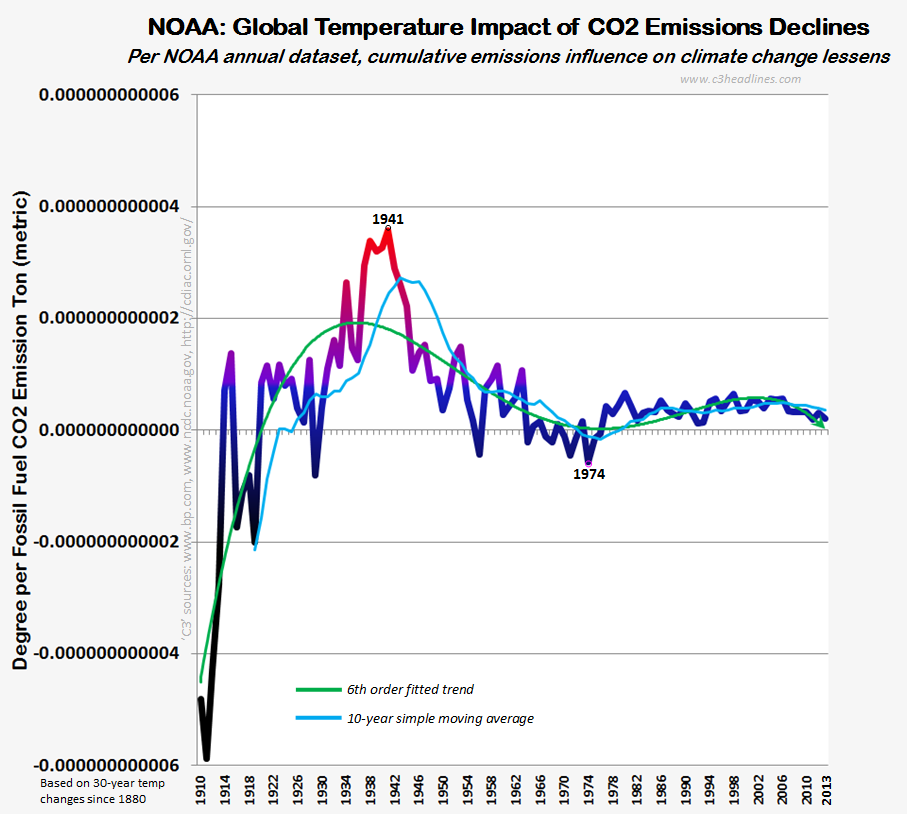 This graph shows that the apparent effect of man's production of carbon dioxide has declined dramatically since 1941, and it is now insignificant.

Weather is ruled by solar heating, winds, clouds, pressure zones, temperature distribution, moisture content, lunar phases, sun spots, solar cycles, local topography and the massive oceans. A meteorologist never checks today's CO2 level before he prepares a weather forecast for the next few days. Sailors and farmers watch the clouds, the wind and the moon, and have barometers, thermometers and hygrometers - none think about CO2 levels.

Rising CO2 in the atmosphere has only one proven effect - it encourages the growth of green plants. Forests, desert plants, crops and grasses are all growing better. None of this can cause wild weather.

We are told that rising CO2 will cause runaway global warming. This has never occurred in the past with much higher levels of CO2. The evidence shows that temperature cycles come and go, sometimes in phase with today's gently rising CO2 sometimes totally out of phase.

Wild weather is usually caused by extreme differences in air pressures and temperatures, which produce strong winds as the atmosphere tries to equalise things. Variable moisture content can then add storm energy to the brew.

Water vapor is the important "greenhouse gas" in the atmosphere. Rising CO2 has almost zero effect on equatorial temperatures, because there is usually so much moisture in equatorial atmospheres that it completely overshadows any impact that CO2 may have. The predicted "equatorial hot spot" supposedly caused by rising CO2 is not there.

But in the very dry atmosphere of the poles, rising CO2 may still have a tiny warming effect which thus reduces the temperature gradient between the equator and poles. This actually lowers the potential for wild weather.

Carbon dioxide can possibly calm the climate but cannot cause wild weather (except in alarmist computer models.)

There has been no measurable "global warming" for 16 years so CO2 cannot be causing England's floods, the US snow or the Australian drought. We have seen them all before.

All records are made to be broken and everyone can expect a share of wild or weird weather some time. There's no need to invent hobgoblins.

UK Weather is not as weird as Claimed:
http://www.telegraph.co.uk/topics/weather/10639819/UK-weather-its-not-as-weird-as-our-warmists-claim.html

Viv Forbes is a science graduate, geologist, farmer, Chairman of the Carbon Sense Coalition and has spent a lifetime studying the weather and the science of carbon.