Warning: mysqli_free_result() expects parameter 1 to be mysqli_result, bool given in /var/www/html/americanthinker/admin/common/functions/func.general.php on line 126
 Another reason to avoid de Blasio's New York - American Thinker
« Mass defiance in Connecticut against assault weapon registration law | Greens ratchet up the pressure on Obama not to approve Keystone »
|

Shocking news on rat infestation of New York City restaurants has come to light.  While it almost certainly cannot be blamed on the nascent administration of far left Mayor Bill de Blasio, the symbolism is nonetheless intriguing. Frank Rosario and Selim Algar report in the New York Post:

A startling one-half of the eateries - 77 out of 154 - in the 10128 ZIP code [the wealthy Upper East Side - ed] were cited for signs of rodent infestation, according to a Harvard grad's study of 2013 city Health Department restaurant ratings across the five boroughs.

"Ugh!" said Clemencia Guillem, 42, after being told about her neighborhood's rat stats. "That's so nasty. Rats are, like, my worst nightmare."

At least the neighborhood has an excuse: the ongoing construction of the massive Second Avenue Subway project.

Recall that the Upper East Side complained loudly about being ignored by snow plows in the first snowstorm to hit the city since de Blasio took office. But it is not the onbly area hit by disgusting rat infestation:

Melendez found that 14 of 23 eateries in the 11429 ZIP code were cited for evidence of mice and rats for a disturbing 60 percent rodent rate - the city's worst.

More than half of the dining options in the Edenwald section of The Bronx and Far Rockaway, Queens, were also cited for droppings.

The 11218 ZIP code near the sprawling Green-Wood Cemetery south of Park Slope in Brooklyn checked in with a 52 percent vermin rate at its 138 dining spots.

In fact, this map, via the Gothamist, shows a widespread problem. 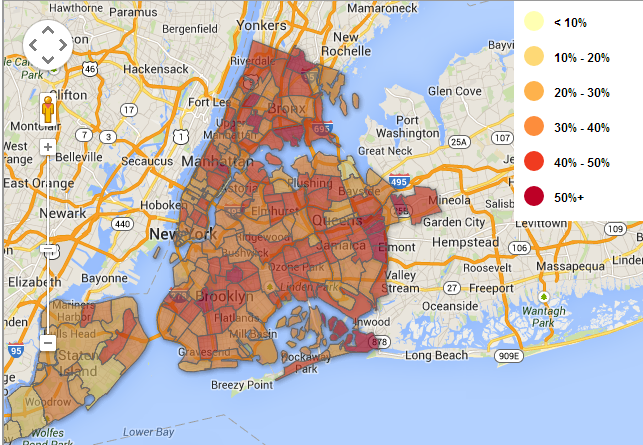