Warning: mysqli_free_result() expects parameter 1 to be mysqli_result, bool given in /var/www/html/americanthinker/admin/common/functions/func.general.php on line 126
 'Satan' character removed from film 'Son of God' because he looked too much like Obama - American Thinker
« Obama to issue executive order on truck fuel standards | A challenge to US low ranking in press freedom index »
|

A feature film based on the wildly popular 10-hour History Channel min-series, "The Bible," will not include the character of Satan.

Roma Downey and Mark Burnett, producers of the History Channel series and the feature film "Son of God" that opens next month, didn't want a repeat of the controversey that occurred when one of the episodes in the mini-series featured an Obama look alike Satan tempting Jesus.

What do you think? Separated at birth? 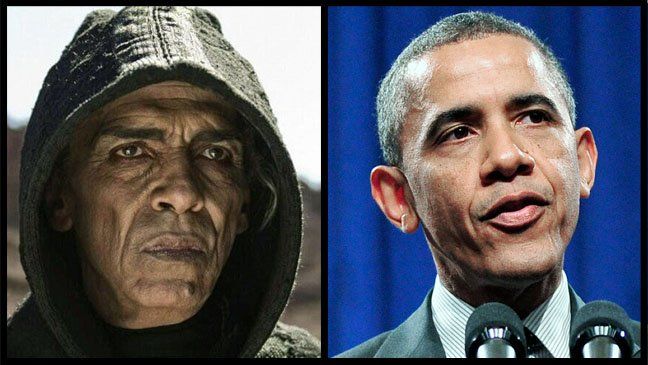 "It gives me great pleasure to tell you that the devil is on the cutting-room floor. This is now a movie about Jesus, the son of God, and the devil gets no more screen time," said Roma Downey, who produced the movie with her husband, Mark Burnett.

The film, which 20th Century Fox opens on Feb. 28, is primarily a reshaped version of the The Bible, last year's hit TV miniseries that featured actor Mohamen Mehdi Ouazanni as Satan.

For Son of God, the 10-hour miniseries needed to be cut down to the two hours or so that focuses on Jesus; Downey says they went out of their way to leave the controversial Satan out of the film.

A year ago, bloggers immediately noted the similarities between the Satan of The Bible miniseries and Obama and side-by-side comparisons went viral. Burnett, Downey and History, which aired the show, each issued statements supporting the president and slamming those that made the "false connection," as History put it, between Obama and Satan.

This time around, though, Downey says she's eager to avoid a similar situation, even though Jesus and Satan both made their appearance in The Bible miniseries during the same episode, so it would have made sense that Son of God also include Satan.

"Someone made a comment that the actor who played the devil vaguely resembled our president, and suddenly the media went nuts," Downey said Monday. "The next day, when I was sure everyone would only be talking about Jesus, they were talking about Satan instead."

She added: "For our movie, Son of God, I wanted all of the focus to be on Jesus. I want his name to be on the lips of everyone who sees this movie, so we cast Satan out. It gives me great pleasure to tell you that the devil is on the cutting-room floor."

Satan tempting Christ in the desert is one of Jesus' most important moments, proving he is both man and God to the faithful. Leaving out this seminal part of the story of Christ just because liberals are upset that there is a passing resemblance by Satan to President Obama is ridiculous. Does anyone really believe that Obama is Satan? Why such sensitivity to the issue?